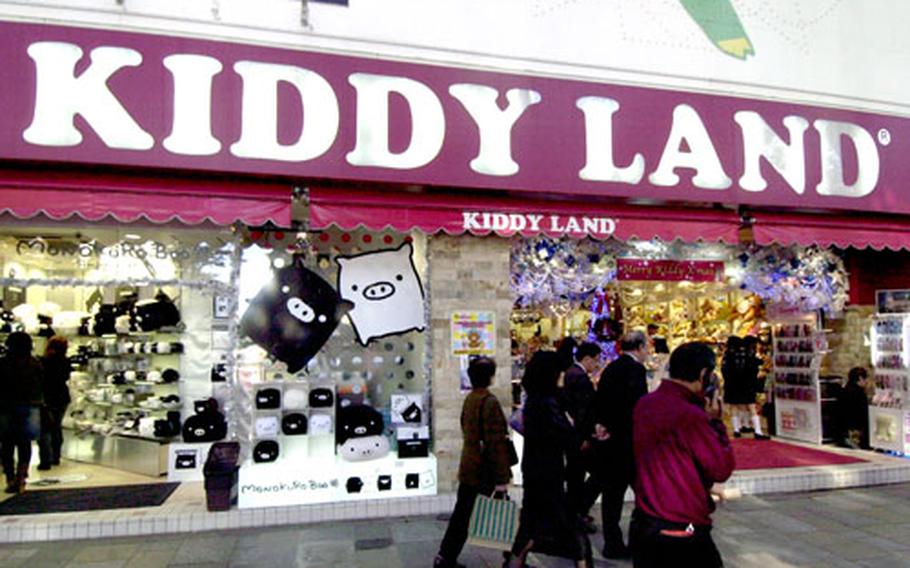 Many of the hottest Japanese action figures — including the Ultraman series of heroes — can be found at Kiddy Land, a popular toy store in downtown Tokyo. (Christopher B. Stoltz / S&S)

Many of the hottest Japanese action figures — including the Ultraman series of heroes — can be found at Kiddy Land, a popular toy store in downtown Tokyo. (Christopher B. Stoltz / S&S) 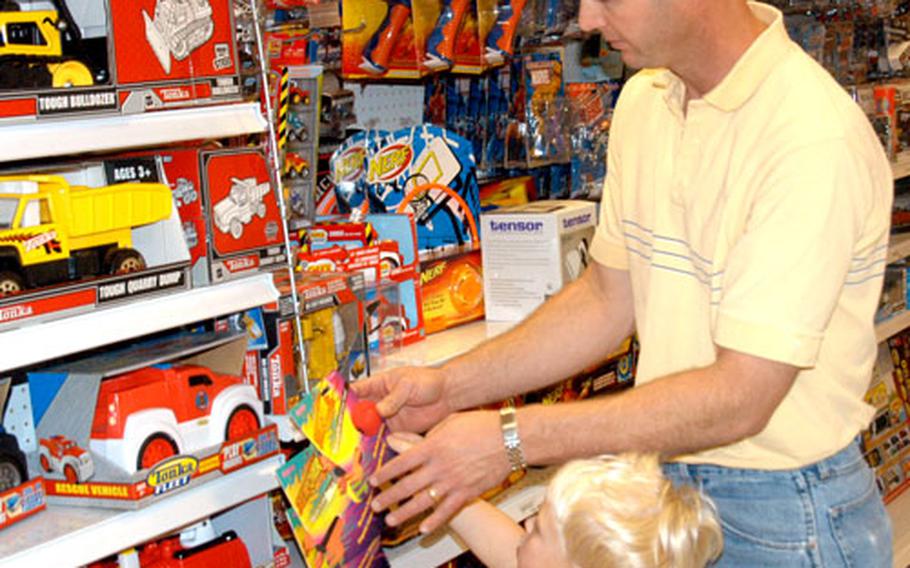 Steven Merrell, a teacher at Zama American High School on Camp Zama, Japan, and his son, Kaden, check out the toys at the Army and Air Force Exchange Service’s BXtra store on Yokota Air Base. (Vince Little / S&S) 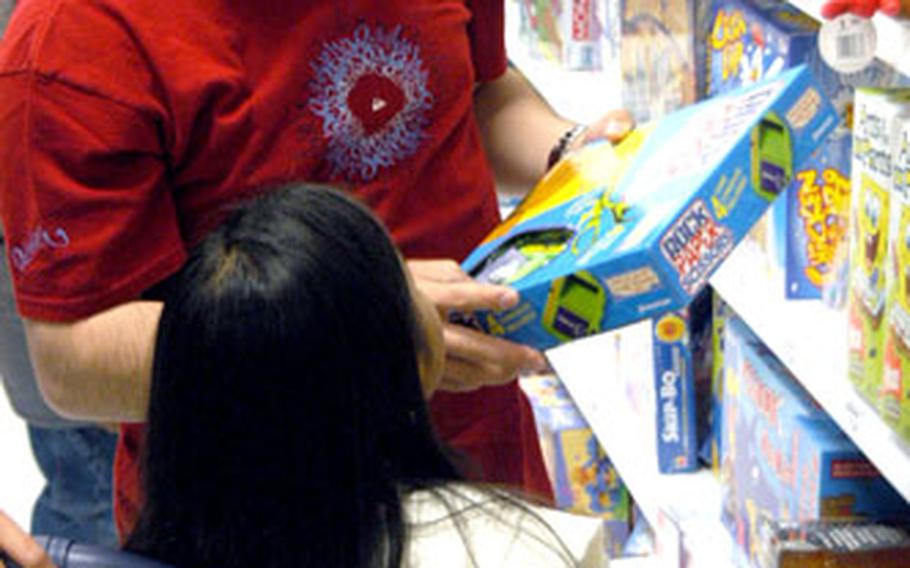 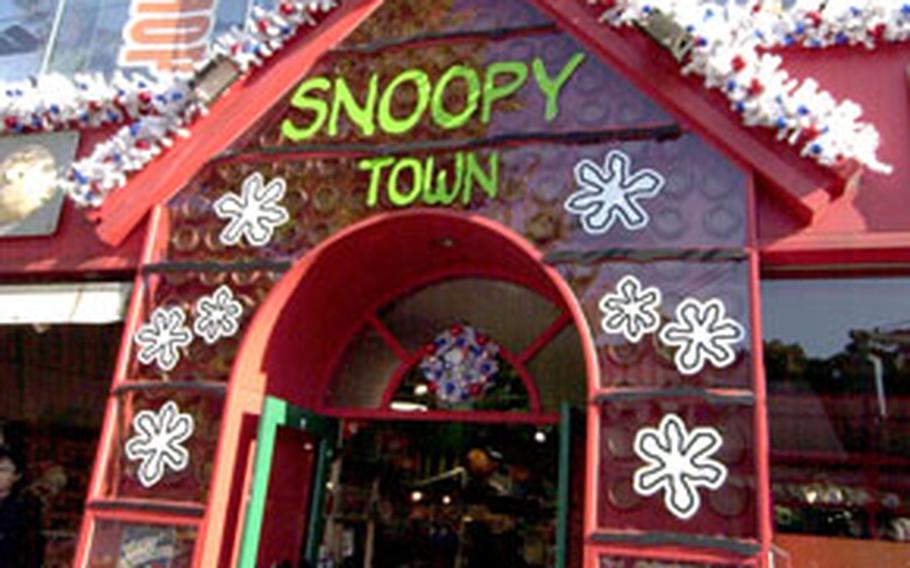 For her 1- and 3-year-old children, Yokota Air Base resident Stephanie Faircloth buys whatever presents catch her eye &#8212; on base or off, even if the toys speak Japanese.

She also brings some hesitant friends with her for off-base toy shopping.

She hits local Japanese department stores and the nearby Toys &#8220;R&#8221; Us, where she has found a racetrack with self-propelled cars for her son and the newly released Cinderella Barbie for her daughter.

Servicemembers and their families living abroad have an eclectic range of options for holiday toys. On base, exchanges follow the latest toy trends for the season. Off base, there&#8217;s a whole new world of options.

There are robots and anime characters and anything bearing the likeness of the ever-popular Hello Kitty.

Still, for those looking closer to home, base exchanges will feature all the popular brands, including those listed on the National Retail Federation&#8217;s 2005 top toys list, according to Sgt. 1st Class Amanda C. Glenn, an Army Air Force Exchange Service spokeswoman in Okinawa.

Exchanges are stocked with many of the latest trends.

The retail federation&#8217;s list includes Barbie for girls and video games for boys. It also features a few oldies but goodies, such as My Little Pony and Hot Wheels toys.

In general, toy trends in Japan and North America are moving toward retro toys &#8212; The Hulk, Care Bears, Teenage Mutant Ninja Turtles and Strawberry Shortcake have made reappearances on shelves &#8212; and educational, family-oriented toys, according to analysts.

The NDP Group, a market research company that tracks the toy industry, reported last year that the learning and exploration toy category grew the most from 2003 to 2004, while the vehicle, tools and plush toys categories made the biggest drop.

The same is true in Japan, according to Tomonari Sato, a spokesman for Toys &#8220;R&#8221; Us-Japan, which has stores near every military base in the country.

Board games that were popular 20 or 30 years ago and the Rubik&#8217;s Cube were reissued this year.

The big toy-buying season in Japan starts about the same time as at home, Sato said. So shoppers should be as diligent here as at home to avoid disappointment.

Top toys in JapanToys &#8220;R&#8221; Us-Japan predicts the following toys will be the big hits during the 2005 Christmas shopping season.

Standing about 3 feet tall, features microwave, oven, sink, stove and other kitchen appliances. Also comes with cutting board and toy knife to cut toy vegetables and plates to serve them on.

Dollhouse with furniture for rooms, such as kitchen and bedrooms. The house also lights up and comes with a squirrel father and girl dolls.

The fuzzy bird thing is back. Forty million original Furbys were sold around the world. The new second-generation Furby features more movements, responses and conversation skills and has an &#8220;off&#8221; button.

Robosaurus is a dinosaur robot with artificial intelligence and infrared, sound and motion sensors that allow it to move and respond like a real dinosaur. Modeled after Tyrannosaurus, Robosaurus reacts based on its mood &#8212; offensive, cautious or playful. Toys &#8220;R&#8221; Us is the only retailer that sells this toy in Japan.

The evolution of the Power Rangers, Magi Rangers, is all the rave in Japan. The superhero group, called Sentai toys in Japan, features a plethora of accessories including this grip phone used by one of the Rangers to transform and attack enemies. It includes an action figure.

This radio-controlled plane is the first biplane toy to use three channels. It&#8217;s a Toys &#8220;R&#8221; Us original. It can fly acrobatically and can change its tires to skies for water surface landing.

Top toys in the States

The National Retail Federation surveyed families across North America to compile this list of top toys for 2005:

Depends on whom you ask. Retailers might have some suggestions, but other groups go to the experts &#8212; kids. Family Fun Magazine sits 1,400 children down for 30,000 hours of playtime each year to find the really coolest toys. According to the magazine&#8217;s Web site, the overall big hits this year were:

The Toy Industry Association, the trade association for the toy industry in North America, offers these tips for selecting the safest toys this year:

When shopping for toys, keep in mind the child&#8217;s age, interests and abilities.Let the label be your guide. Many toys include a recommended age range, based on children&#8217;s developmental abilities, and as a guide for their safety. Look for age ranges and safety warnings on toys or their packages &#8212; and follow them &#8212; to ensure a &#8220;safe pick.&#8221;Be especially careful when choosing toys for children younger than 3. For this age, select toys that are free of small pieces (or pieces that separate or can be broken off), are lightweight and have no sharp edges or points.Consider the home environment in which a child will play with a toy and younger children who may be there. A toy intended for an older child may be dangerous in the hands of a younger one.At home, read instructions for assembly and use. Keep product literature in case of future questions, and complete and send in warranty cards.Remove and discard all packaging from a toy before giving it to a baby or small child.Supervise children when they play and set good examples for safe play.Remind caregivers, including grandparents, of play-related safety concerns.Choose a safe storage place for toys.Check toys at least every three months to determine their safety. Make any repairs immediately or throw away damaged toys.&#8212; Source: Toy Industry Association