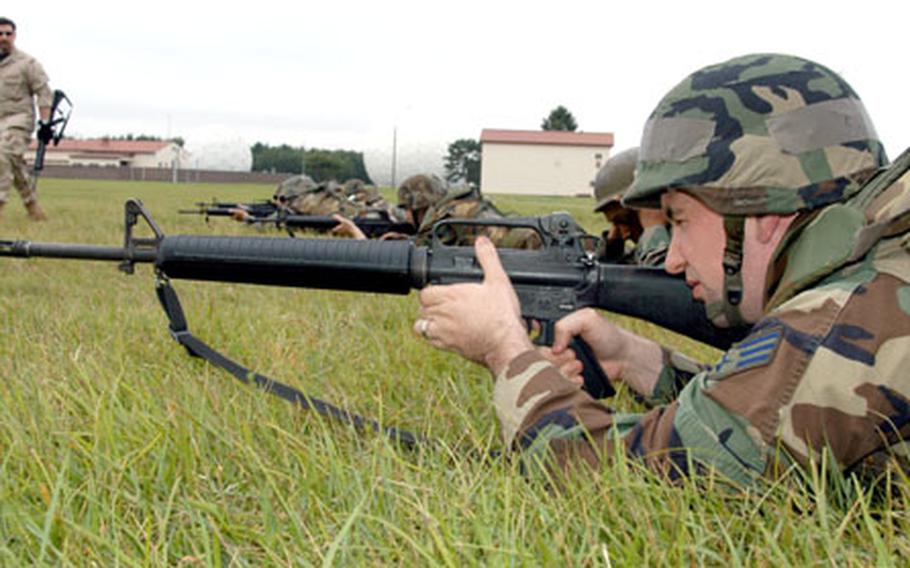 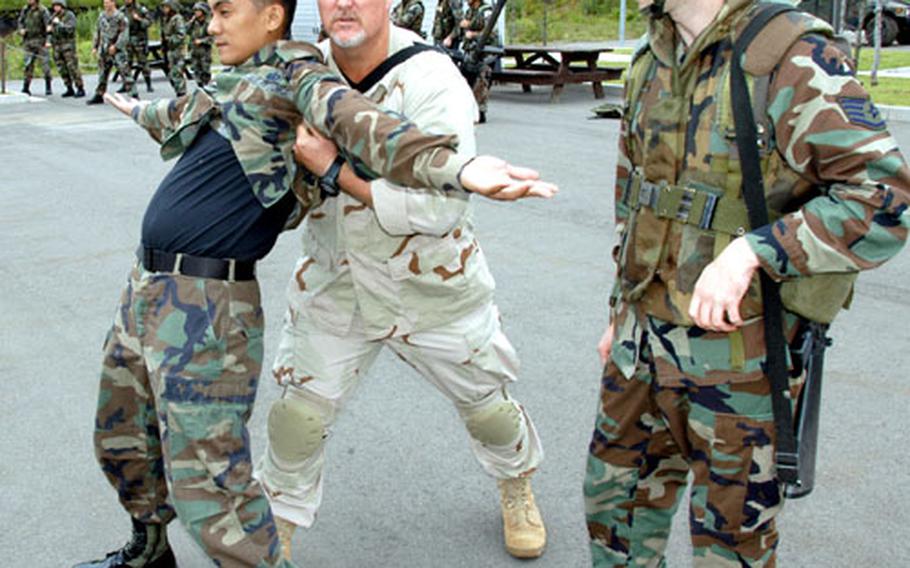 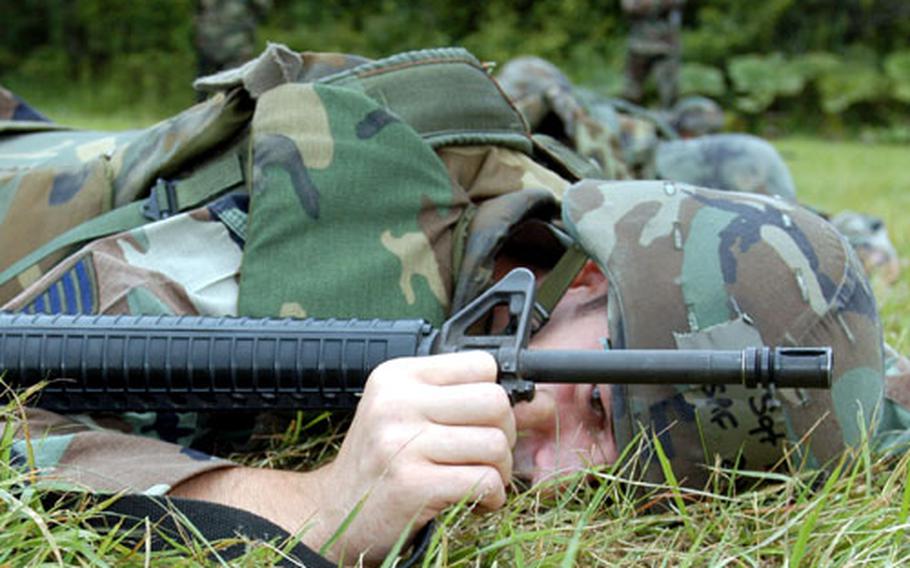 Tech. Sgt. Jason Enoch lies with the side of his face on the ground while practicing the low-crawl during expeditionary combat skills training. Instructor Adam Smith said, “If the side of your helmet isn’t grass-stained, then you’re doing it wrong.” (Jennifer H. Svan / S&S) 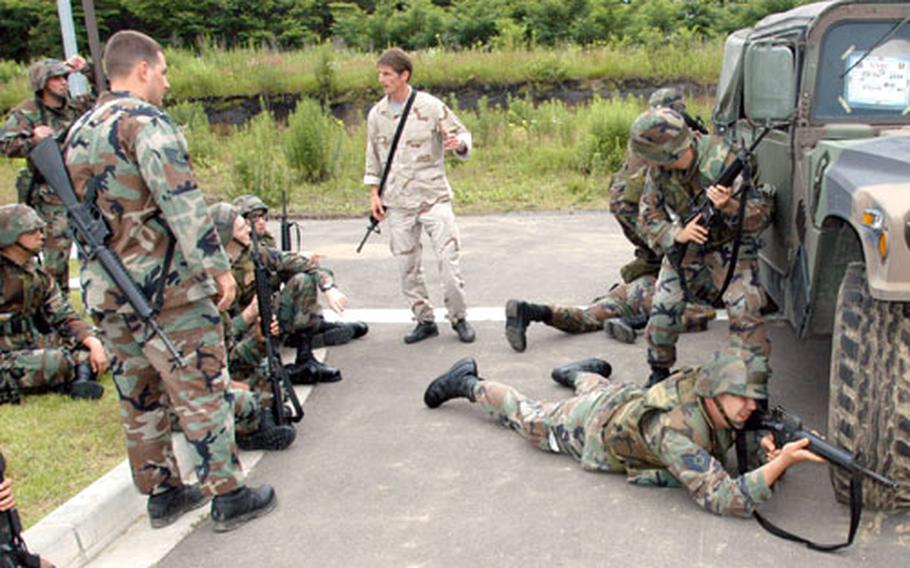 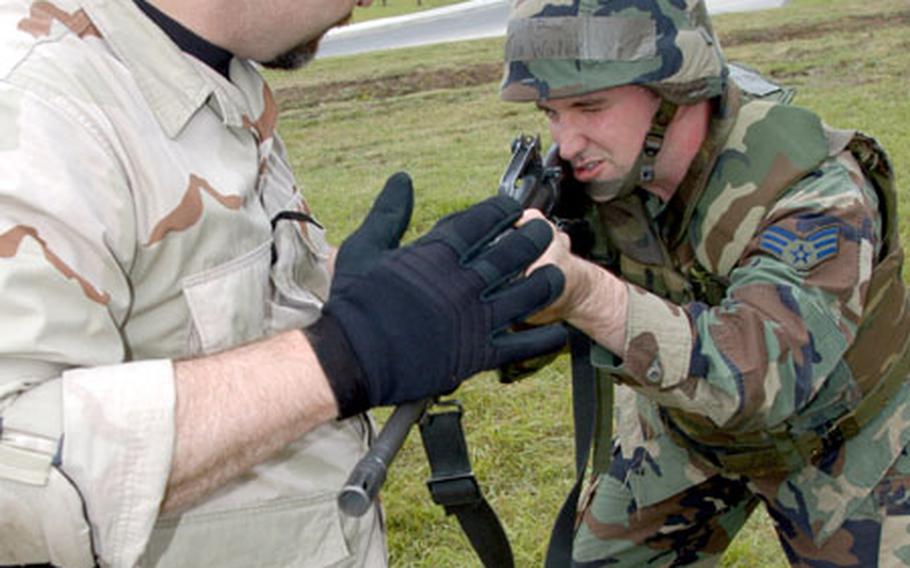 MISAWA AIR BASE, Japan &#8212; In nature, there are no straight lines.

It&#8217;s an observation that makes sense but doesn&#8217;t occur to most. Except in Iraq, where chances are that a straight line in the sand conceals a wire attached to an improvised explosive device.

Over the past two weeks, more than 350 airmen here exercised their brains and muscles during expeditionary combat skills training. Former military counterterrorism experts, now with Analytic Services Inc., taught the two days&#8217; worth of intense academics and field drills.

Pacific Air Forces hired the Arlington, Va., firm to design and teach the classes after the Air Force began requiring that all airmen deploying to war zones receive a minimum 20 hours of combat training, the instructors said.

The trainers were at Misawa for the first time but have taught their course at other PACAF bases where airmen have deployed for an Aerospace Expeditionary Force rotation.

It&#8217;s Misawa&#8217;s turn in the hot zone now: Base officials said this week that more than 500 airmen have been identified for a possible deployment during the next 120-day AEF cycle from September to January.

Airman 1st Class Adrian Risby, 21, 373rd Intelligence Group, is one of them. He said if he goes, he&#8217;ll most likely be assigned to escort foreign national workers.

Many in the class agreed.

Topics covered in the training include convoy operations, &#8220;search and challenge&#8221; procedures, unexploded ordnance sweeps, individual movement techniques, IEDs, M-16 usage and battlefield first aid. Airmen practiced crawling with weapon in hand low to the ground &#8212; what&#8217;s referred to as the &#8220;sniper drag,&#8221; which is used to close in on a target without being seen.

The Air Force is playing catch-up. Its basic training currently is the shortest among the services; some airmen shoot their M-16s only about once every 24 months for qualification, if that.

Unlike in wars past, airmen in Iraq and Afghanistan are doing jobs normally assigned to the Army, from driving convoys to guarding prisoners.

The combat training isn&#8217;t designed to mold airmen into infantrymen, instructors said, but to teach them skills to stay alive and not become a liability when working with Army, Marine Corps and Air Force Security Forces units.

&#8220;We&#8217;re just trying to teach them just enough that they can get out of the vehicle, get behind some cover and lay down enough suppressive fire that they can stay alive &#8230; and not hurt each other in the process,&#8221; said instructor Rod Propst, a retired Army lieutenant colonel. His mantra: &#8220;Stay alert, stay alive.&#8221;

For instance, Staff Sgt. Adam Varga, a 35th Logistics Readiness Squadron vehicle operator, who was the gunner on Army convoy escorts for eight months in Iraq, had two months of training in the States before deploying last year.

MacArthur said airmen will be expected to know how to move if they go out with other units. It will be difficult after only 20 hours of instruction, he said, but airmen still might outperform their Army counterparts if they use their skills and &#8220;just think.&#8221;