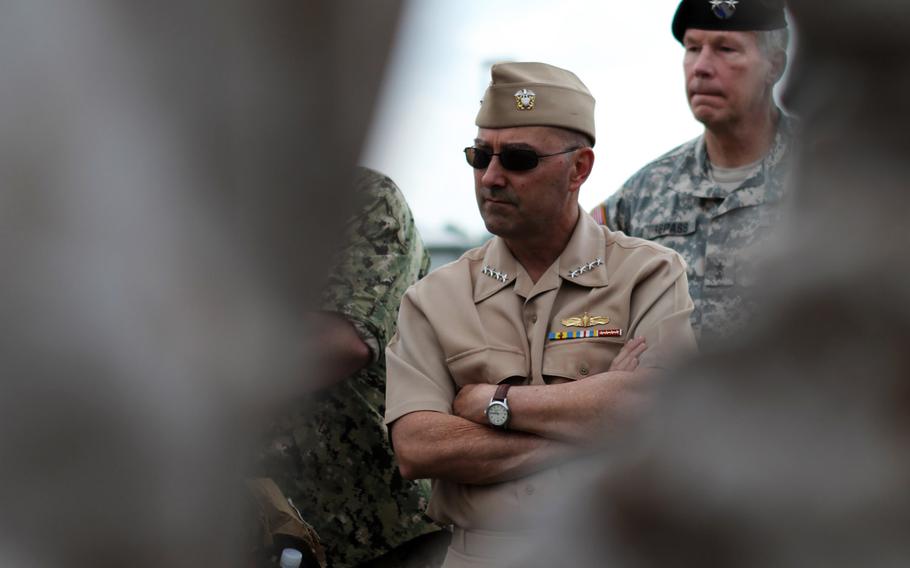 NATO’s outgoing military commander said Monday his message to Taliban insurgents fighting the international coalition in Afghanistan is to give up the armed struggle and join the political process, because they don’t stand a chance of ever re-establishing control through violence.

Adm. James Stavridis, NATO’s Supreme Allied Commander, said the expansion of the Afghan army and police to more than 350,000 members and their assumption of security responsibility from alliance forces, meant that “the Taliban narrative that they are fighting foreign invaders breaks down completely.”

“They are not fighting foreign invaders, they are fighting their own people,” Stavridis said in a telephone interview from his headquarters in Mons, Belgium. “I don’t think the Taliban have a winning hand of cards.”

Still, Taliban leaders are said to perceive themselves as winning the 12-year war. Having managed to survive and even expand their forces despite NATO’s overwhelming superiority in numbers, firepower, mobility and other factors, the insurgents claim they will be able to defeat the much less capable Afghan army and police after all foreign combat troops withdraw at the end of 2014.

Peace talks in Qatar between American, Pakistani and Taliban representatives have made little progress and have been virtually suspended for the past year. Despite hopes that they could restart this summer, Taliban spokesmen have vowed the insurgents instead will step up attacks this summer.

Stavridis, who completes his four-year tour this month as both NATO’s top commander and head of U.S. European Command, said that fundemantal changes in Afghan society since the ousting of the Taliban regime in 2001 meant that Afghanistan would not “stumble back into Taliban hands.”

He cited statistics showing there are currently almost 9 million children in school in the country, compared with just 500,000 under Taliban rule. Basic healthcare has been made available to 65 percent of the population, in contrast to just 10 percent prior to 2001. Cellphone penetration is one of the highest in the region, where it was nonexistant a decade ago. Recent opinion polls show that the approval rating for the Taliban is less than 10 percent, in contrast to over 50 percent for the government in Kabul.

“If they do that, they can come in and become part of building of the new Afghanistan and be part of a political process.”

Stavridis, who was the first naval officer to command both EUCOM and NATO in the alliance’s 64-year history, will retire later this summer. This month, he hands over both commands to Air Force Gen. Philip Breedlove, who currently commands U.S. Air Forces in Europe and Air Forces Africa.

During the past four years, Stavridis proved highly popular among NATO’s political and military leaders. He also forged a close working relationship with his Russian counterparts, despite frequent differences between Moscow and NATO over issues such as missile defense. He is also credited with mending fences with military leaders in Serbia, which fought a brief but bloody war with NATO in 1999.

His operational portfolio has been wide-ranging: directing the alliance’s efforts in Afghanistan, overseeing NATO’s bombardment campaign in Libya in 2011 and counter-piracy efforts off the Horn of Africa.

After he retires later this summer, Stavridis — regarded as a forward-looking strategic thinker — will become the dean of the Fletcher School of Law and Diplomacy at Tufts University, where he received a PhD in 1984. He will also take up a pro bono position as chairman of the board of the U.S. Naval Institute, a nonprofit known for challenging conventional military wisdom.

“It’s a chance to stay engaged in the international environment,” he said during the interview.

Stavridis rejected criticism from some on Capitol Hill about the continuing deployment to Europe of thousands of U.S. servicemembers as an unnecessary relic of the Cold War.

He said the presence of U.S. forces, which has been steadily dwindling, “is vital for U.S. national security and will continue to be so.”

As part of the restructuring caused by the Obama administration’s “pivot” to Asia, overall U.S. forces in Europe are currently declining from about 80,000 to 69,000 servicemembers.

“The geography of Europe, ... the fact that we have forces stationed here allows the U.S. to quickly respond to crises in the Mediterranean, in the Levant, in the near Middle East and in Central Asia and south into Africa. It’s a vital piece of real estate where the United States will want to stay involved.”

And the NATO alliance itself is a major asset, Stavridis said.

“Where else in the world will we find such trained, capable and high-tech partners for military operations than here in Europe?”