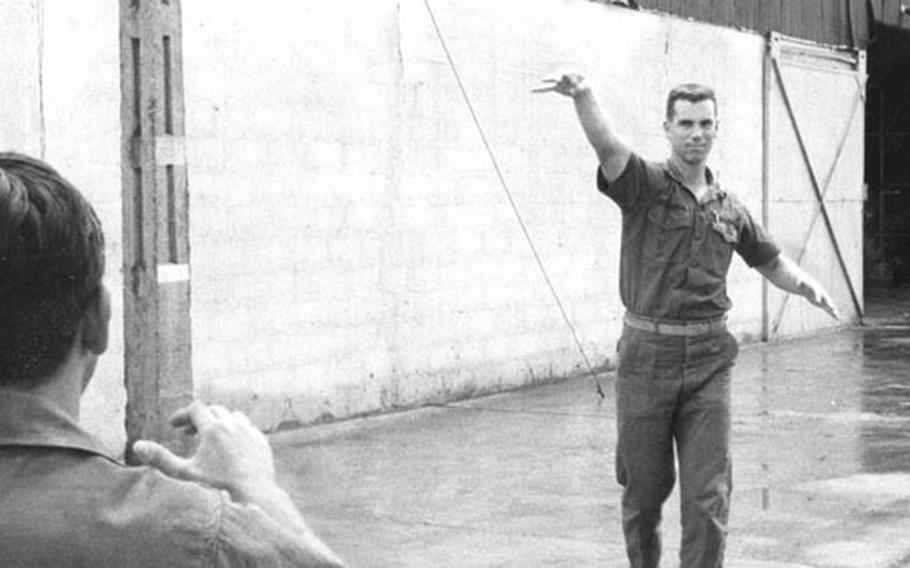 Buy Photo
Ensign Roger Staubach tosses a football during a break from his duties at Da Nang in October, 1966. (Ray Mahon/Stars and Stripes)

The setting was far from being impressive for the Navy quarterback whose name, two years ago, was a household word in millions of American homes. But Staubach prefers it that way.

"This story you write about me won't go back to the States? It's just for Stars & Stripes, right?" he asked.

The soft-spoken, 24-year-old former All-America and Heisman Trophy winner has been in Vietnam for almost two months.

"I'm in the Navy and my only interest now is doing my job and getting back to my wife and four-month-old daughter in Cincinnati, Ohio," he said.

Staubach holds down two jobs here. He is the officer-in-charge of the Personal Effects Div. of the Naval Support Activity and a petroleum-oil-lubricant site on the outskirts of Da Nang.

"Sure, I miss football, in fact, quite a bit. But, I hope to get a chance to play service ball while in the Navy," he said.

Staubach would neither confirm nor deny reports that the Dallas Cowboys had signed him to an option.

As for his future football plans, he said, "I still have a good 30 some months to do on my obligation to the Navy, so we will just have to wait and see."

Staubach shook off the theory that his four years away from the gridiron would hurt his chances of making pro football. "I honestly feel I can make it. I hope to stay in good condition, although it's difficult here because there aren't any recreation facilities. However, there are plans to build some as soon as the essential construction is completed," he said.

He said his job keeps him tied down most of the time, but he does have an opportunity to work out with weights and toss the ball around once in a while.

A frequent receiver of Staubach these days is former teammate Fred Marlin, who captained the 1964 Naval Academy team when he and Staubach were seniors. Marlin works in the supply department of the Da Nang Naval Support Activity:

He and Staubach were roommates who stayed on at the Academy after graduation to coach the Plebe team for six months. From there, they went to Athens, Ga., for another six months of instruction at the Navy's Supply Corps School.

Following school, they volunteered for duty in Vietnam and were sent to the Survival Training School where Marlin recalls, "We were the only two in our 47-man class who escaped from the mock prisoner-of-war camp."

"Rog leaped over the barbed wire fence during the night and I got away the next day by opening the gate and sneaking off when the guard wasn't looking," Marlin said.

Staubach, who has 41 enlisted men working for him, is highly respected by all.

His immediate boss, Cdr. Pat Curtain, the Materiel Div. officer, said, "Staubach is a good naval officer. He is extremely diligent and conscientious and is always concerned over the welfare of his men."

Seaman William Fichtman, 19, of Miami Beach, Fla., describes Staubach as, "The best boss I've ever had."