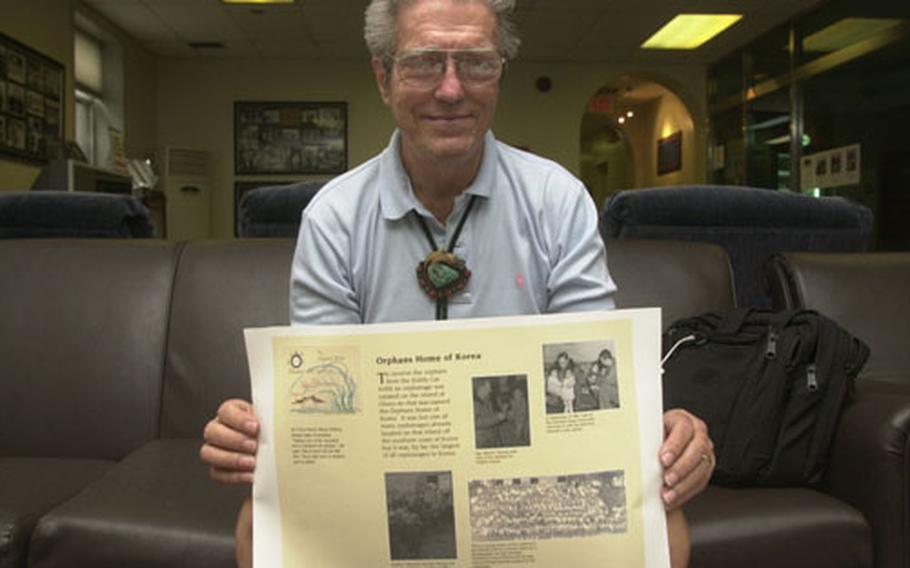 George Drake, a Korean War veteran, is on a quest to raise money for a memorial to the soldiers who saved thousands of Korean orphans. He visited Korea last month to meet with military and civilian officials. (Joseph Giordono / S&S)

SEOUL &#8212; Fifty years ago, U.S. soldiers like George Drake helped save tens of thousands of starving Korean children left orphans by the Korean War and its aftermath. Now, Drake is the one in need of help.

To complete the quest that has defined the past decades of his life &#8212; honoring soldiers who helped save the orphans &#8212; he has traveled back to South Korea to drum up financial support for a memorial to the acts of his fellow servicemembers.

In late July 2003, Drake shepherded the dedication of the Korean War Children&#8217;s Memorial in Bellingham, Wash. But the tall wooden pagoda, set amid lush green trees and a border of large stones, still is not complete. And, Drake said in an interview last week, his organization needs $50,000 to pay off the debt building it incurred.

His estimate, which he says is on the conservative side, is that U.S. troops saved more than 10,000 children and helped sustain more than 50,000 others in 400 orphanages throughout South Korea.

&#8220;Most of these guys were making less than $100 a month, depending on their rank. But over the three years of the war, the American soldier donated more than $2 million to help orphanages,&#8221; said Drake, who served as an enlisted man in the 326th Communications Recon Company, operating near Pyongtaek from August 1953 to December 1953.

Sitting on a couch in the Camp Kim United Service Organizations building recently, he paged through a mock-up of the traveling photo exhibit he wants to make. Titled &#8220;GIs and the Kids: A Love Story,&#8221; it chronicles the interactions between U.S. troops and Korean kids from 1950 to 1954.

As Drake envisions it, the exhibition will display 160 photos on 36 panels, each measuring roughly four feet by two feet. He hopes to have English- and Korean-language versions of the exhibit, which is to travel throughout the United States and South Korea. That project is being funded by family members of Col. Russell L. Blaisdell, an Air Force chaplain instrumental in saving thousands of kids through a Korean War airlift.

Drake says his projects have many purposes. The main one, he says, is to tell a story not many people know. With today&#8217;s military embroiled in bloody conflicts in Iraq and Afghanistan, and having its image soiled by incidents such as the Abu Ghraib prison scandal, Drake wants today&#8217;s soldiers to remember the good things soldiers have done.

&#8220;I want American troops, especially the ones in Korea now, to be so damned proud of their predecessors,&#8221; Drake said.

And he wants to tell the story to the younger generation of South Koreans, who polls have shown harbor mainly negative feelings about the U.S. military presence in South Korea. To that end, he spent much of his time in South Korea last month meeting with student groups and giving interviews to South Korean media.

Officials at the Korean War Memorial in Seoul said they&#8217;re interested in hosting one of the photo exhibits. But calls to other South Korean government agencies reflected why Drake indicates many of his attempts to get support in South Korea for the projects have been frustrating.

Still, he has big plans. His dream fund-raiser, he said, would be a bicycle trek of surviving Korean War veterans, beginning in North Korea and cycling down the peninsula to South Korea.

More information on the memorial can be found at www.koreanchildren.org.