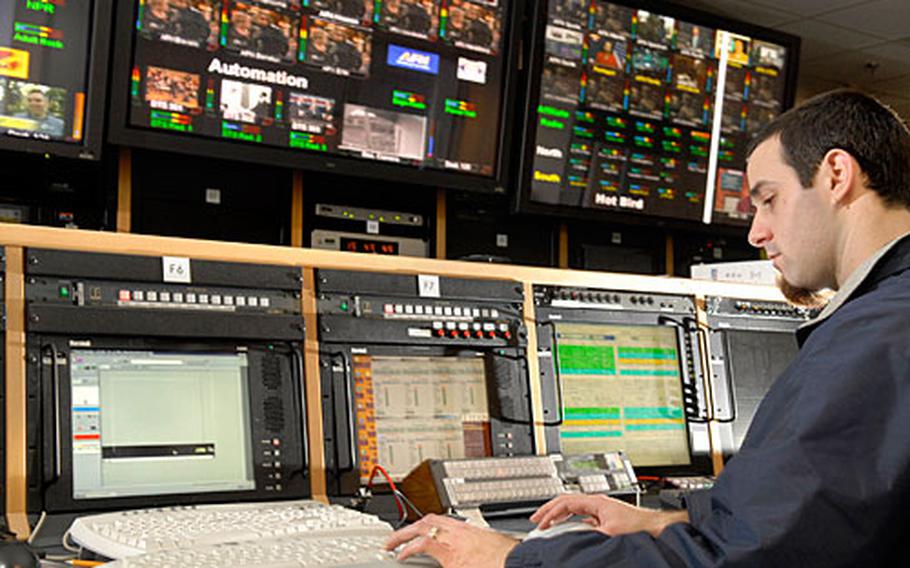 Sean Suttell, a controller, monitors U.S. TV and radio programming feeds coming into Europe Tuesday at American Forces Network headquarters in Mannheim, Germany. Even if the Hollywood writers&#39; strike continues into the new year, viewers shouldn’t notice the lack of new material for at least a few months because they get shows late anyway, according to AFN officials. (Ben Bloker / S&S)

&#8220;Most everything on AFN is reruns anyway,&#8221; said Vettel, with the 596th Maintenance Company out of Darmstadt.

Still, Vettel&#8217;s favorite show, &#8220;Late Show with David Letterman&#8221; and most other late-night talk shows, have been stuck in repeats since the writers union collectively walked off the job six weeks ago. The Writers Guild of America is negotiating to get more residual income for its members from the television, movie and radio industries.

Though U.S. TV networks got through the first few weeks of the strike thanks to a stockpile of programming, sitcoms and dramas now are starting to follow suit with the repeating late-night talk show circuit.

But, if the strike continues into the new year, military audiences shouldn&#8217;t notice the lack of new material for at least a few months, say American Forces Network executives. That&#8217;s because AFN starts airing current television series in January, months after they&#8217;ve already begun in the U.S.

&#8220;That will probably take us to late April or May, probably even June. Then we&#8217;ll see what the networks come up with in the spring,&#8221; Larry Marotta, chief of AFN&#8217;s television division, said from his California office Monday.

However late-night talk shows should be back in business by the new year, he said.

On Tuesday, the Los Angeles Times reported that Jay Leno and Conan O&#8217;Brien will return to the air on Jan. 2 without the writers. The paper also reported that Letterman and &#8220;The Late Late Show with Craig Ferguson&#8221; &#8212; owned by Letterman&#8217;s production company, World Wide Pants &#8212; are working on a deal with the writers union to get back on the air.

For sports fans, the writers strike has gone unnoticed.