Stateside radio personalities record greetings to be played in Iraq 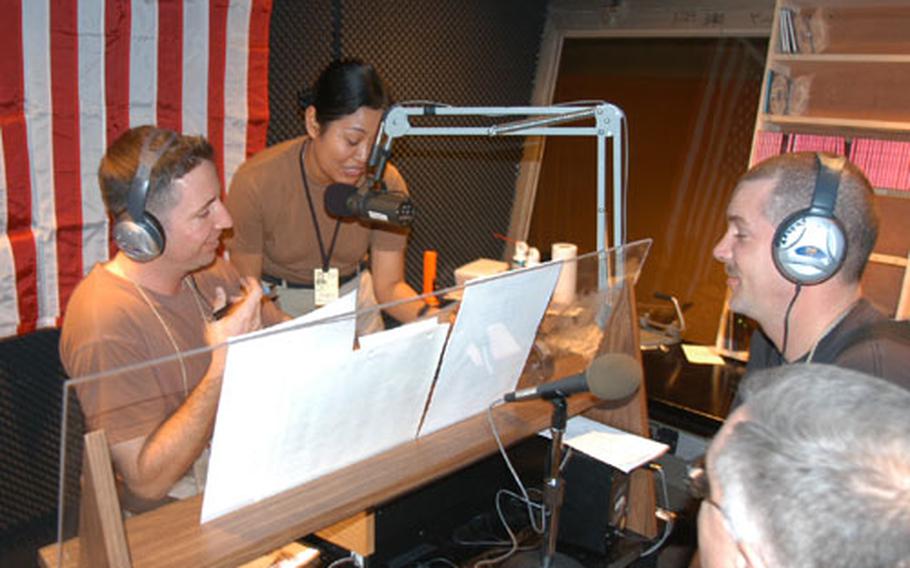 Members of AFN-Iraq in the studio Thursday during a live daily radio show on Freedom Radio in Baghdad, Iraq. The radio industry in the United States has responded eagerly to the station&#39;s invitation to provide recorded greetings and other short items for the troops in Iraq. From left to right are Staff Sgt. Chris Eder, Pfc. Abbey Cayanan, and Tech. Sgt. Bob Herron, and, back to camera, Sgt. 1st Class Edgar Jansons. (Franklin Fisher / S&S)

BAGHDAD, Iraq &#8212; They&#8217;d soon be launching Freedom Radio for the troops in Iraq, and Air Force Master Sgt. Erik Brazones had a lot on his mind.

An idea hit him. A cool thing for the troops would be to hear greetings from their favorite hometown DJs and other radio personalities, as well as greetings from ordinary people back home. And they wouldn&#8217;t be tied to the holiday season &#8212; they&#8217;d be good to run anytime.

Brazones e-mailed the National Association of Broadcasters for help. It promptly got him in touch with some people in the radio trade press who passed the word to their subscribers &#8212; mainly radio group execs and station managers.

More than 100 recorded greetings and other spots have come in to the station by e-mail and more are expected.

But it wasn&#8217;t just greetings. Two Vietnam veterans contacted them and offered to prepare voice-over spots free of charge. The spots, or &#8220;liners,&#8221; start and end with an announcer&#8217;s voice, but in the middle are joke voices:

Another features an audio excerpt from what one Freedom Radio staffer said was actor James Arness in the TV Western series &#8220;Gunsmoke&#8221;:

And there are the greetings, like the one from a woman with a Southern accent whose greeting is powerful, less for the words she says as for her motherly tone and the way she ends up choked with emotion:

Some of the greetings are in a comical vein:

&#8220;Hi, this is Jim Scott, the morning guy on 700 WLW in Cincinnati. And I just wanted to say, be safe, get home soon, and since this is the home of the Cincinnati Reds, we are looking always for left-handed pitchers. You fit the bill? Then talk to the general and tell him you gotta get outta there.&#8221;

&#8220;It was just a matter of getting the word out, and the response has been overwhelming.