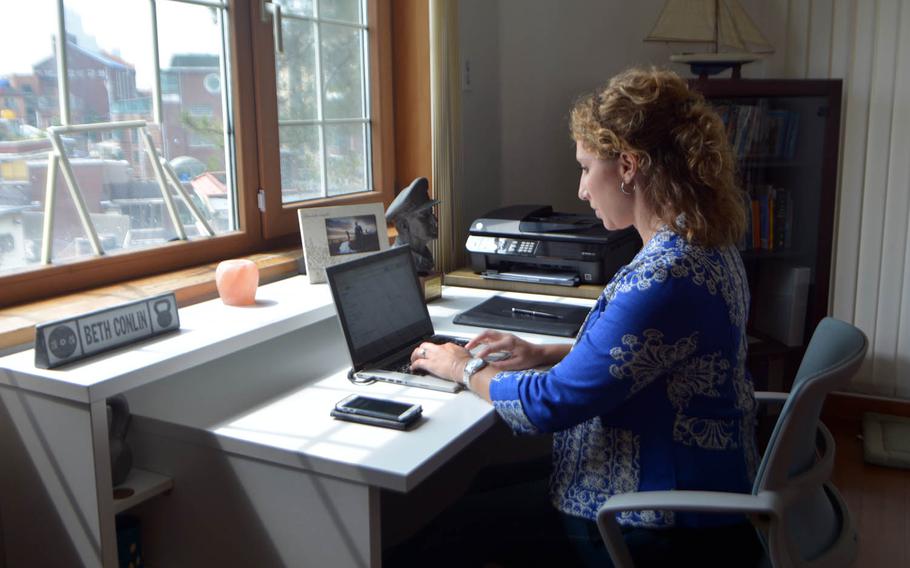 Beth Conlin is among the many military spouses who have struggled to find work because of frequent deployments, lack of child care, erratic schedules for servicemembers and complicated licensing laws. (Kim Gamel/Stars and Stripes)

SEOUL, South Korea — Beth Conlin found her dream job with General Electric Intelligent Platforms. The firm had her at “you can work anywhere.”

Conlin is married to a soldier, which means frequent deployments that usually scare away employers. So she was thrilled when GEIP said the job could go with her when she and her husband moved from Rhode Island to Germany.

But Conlin had to quit anyway because of a clause in the status of forces agreement with Germany that prohibited her from keeping her business-development position. She was devastated.

Her problem was solved when she sent her resume to ServingTalent, an employment agency for military and government spouses. Conlin was hired as director of recruitment.

The most recent survey of active-duty spouses in 2015 found that their unemployment rate was 23 percent. That was a slight improvement from 2010, but still sharply higher than the civilian rate of 4.4 percent for women older than 20.

Those who get jobs often find themselves overqualified and underpaid.

Estimates vary widely, but a 2013 study found that 90 percent of wives of active-duty servicemembers said they had more education and experience than their jobs required.

The report by the Institute for Veterans and Military Families at Syracuse University and the Military Officers Association of America also concluded that military spouses earned 38 percent less on average than their civilian counterparts.

Advocates say the issue threatens to undermine family unity and may prevent soldiers from extending their service. It also has a steep cost to society, which one recent study estimated to be between $710 million to $1.07 billion per year in lost tax revenues and other costs.

Increased awareness about the problem, which often is linked to veteran unemployment issues, has led to a number of programs and websites with job listings, career counseling, resume assistance and interview coaching.

“We’re finding folks that want to work and need to work, so providing a military spouse with a job at the end of the day is helping to retain the best and brightest of our servicemembers,” said Elizabeth O’Brien, director of the military spouse program at Hiring Our Heroes, a U.S. Chamber of Commerce initiative.

Companies also are increasingly recognizing that military spouses are motivated, educated and bring unique skills to the table, advocates say, and technology has created more opportunities to work remotely.

ServingTalent, which began operations in September 2015, and other organizations are taking advantage of that.

The startup was founded by two women who met while stationed with their husbands at the U.S. Embassy in Chile -- Maggie Varona, a Navy wife and certified public accountant, and Marcelle Yeager, a foreign service spouse with a master’s degree in business administration.

Conlin, 35, works from her new post in Seoul where she moved with her husband, an infantry major, in February after nearly three years in Germany.

She said 30 percent of the nearly 700 candidates who have signed up so far hold master’s degrees while others are nurses, accountants, lawyers and more.

The company has signed up more than 25 employers ranging from large corporations and veteran-owned businesses to smaller companies, including a virtual CPA firm.

“This variety of education and work experience allows us to tap into a broad range of employers,” she said. “The more spouses that we can employ, the more families they’re supporting. That’s good business for everybody.”

ServingTalent functions like a traditional employment agency with a special talent pool. It acts as an intermediary with the companies, finding permanent jobs and contract positions for candidates.

So far, the company hasn’t run into problems with SOFA restrictions such as the one Conlin faced in Germany. But it is able to overcome most issues with the increased flexibility.

“We don’t hide the fact that you’re military or foreign service. We actually tout that because our candidates are so ridiculously qualified,” Conlin said.

One surprising obstacle has been misconceptions about military life. Some potential employers worried that spouses live in bunkers and aren’t permitted to use the internet.

“But normally they just think we move a lot,” Conlin said.

There are several other initiatives as advocates try to replicate the successes of a push to hire veterans. The average unemployment rate for veterans who joined the military after the 9/11 attacks was 5.8 percent last year, a significant drop from a peak of 12 percent in 2011.

For one thing, those married to active-duty troops get preference for jobs that are available on base.

The Defense Department’s Military Spouse Employment Partnership also has connections with more than 300 companies and organizations.

In 2011, the U.S. Chamber of Commerce launched Hiring Our Heroes, which is aimed at helping veterans, transitioning servicemembers and military spouses find meaningful employment.

It also recently acquired In Gear Career, a nonprofit that offers professional development and networking chapters at a number of military installations around the world.

“The intent is to build a network between installations so when these spouses move they’re already plugged into a job market and a network,” O’Brien said. “They are getting a warm handoff and getting absorbed into a new community.”