Start the Presses! The Fuji Flyer is back 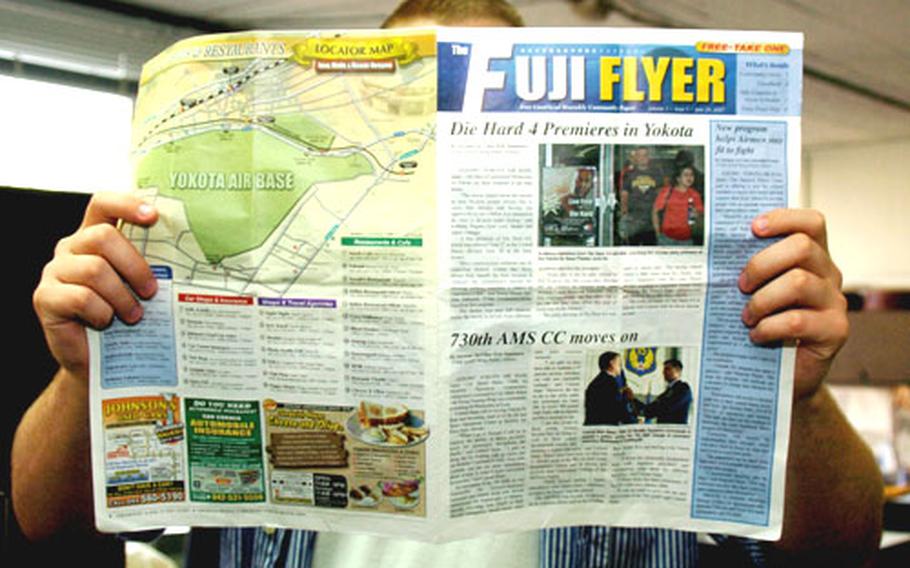 Even though Yokota Air Base&#39;s Fuji Flyer newspaper was discontinued on June 1, a local contractor began printing The Fuji Flyer on June 29. (Photo illustration by Christopher B. Stoltz / S&S)

Eros Rivers, 34, had a contract with the base for seven years to print the old newspaper, which the public affairs office now produces online only in response to a worldwide push by the Air Force to save money and work hours.

With the rebirth of the newspaper, Rivers no longer has a printing contract with the base, and he did not bid for the opportunity to provide the Yokota community with the newspaper and keep the ad revenue.

There is no contract that governs the relationship, and the base has no power to tell him what he can or cannot put in the paper, according to the 374th Air Wing Public Affairs Office.

Instead, Rivers and public affairs officials have an agreement that he can use their news stories, their distribution boxes and office space in Yokota&#8217;s marketing office. In exchange, Rivers runs a four-page insert from the marketing office in the paper for free.

&#8220;Whatever I make is what I keep,&#8221; he said during a telephone interview earlier this month, adding that money is not his main motivation.

The relationship didn&#8217;t require a competitive bid or contract, according to Staff Sgt. Ruth Kurfman, chief of internal information for the air wing.

Some other commands use &#8220;commercial enterprise&#8221; papers as the business formula for their base newspapers, a process that requires competitive bidding and a formal contract, Air Force Lt. Col. Ann Stefanek from the Current Operations Directorate at the Pentagon wrote in response to questions.

The typical arrangement allows the military to hire a printer at no cost. The military staff provides the news content; the publisher sells the ads and pays for the printing. The ad sales provide the publisher a profit without costing the military a dime, according to several public affairs officers in the Pacific.

Kurfman said Rivers&#8217; newspaper is not a commercial enterprise paper; instead, he&#8217;s working through the base marketing department.