Start of war would bring about tight security at Pacific bases 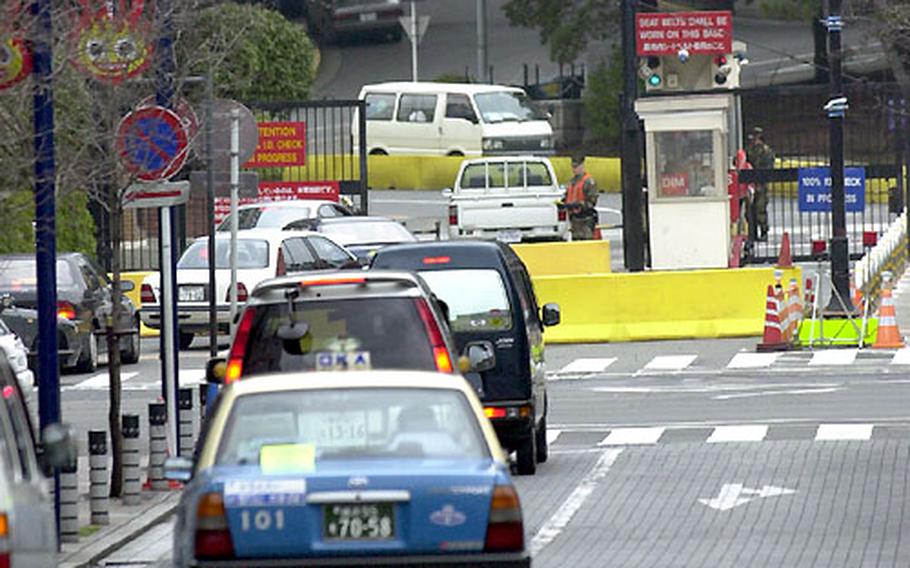 Early morning traffic formed a short queue at the Yokosuka Naval Base, Japan, front gate — but far longer lines may materialize should security be heightened if war starts with Iraq. (Jim Schulz / S&S)

If war is declared on Iraq, residents of U.S. military bases in the Western Pacific can expect tighter security at base gates and some restrictions on their movements.

If the experience of the days just after the Sept. 11, 2001, terrorist attacks in the United States is any indication, Force Protection Condition (FPCON) Delta, the highest state of readiness, could be declared.

Many base gates will be closed, and strict security checks at others could result in long lines of traffic.

&#8220;If we go to FPCON Delta there will be very little available in the way of services on the camps,&#8221; he said in the monthly newsletter to base residents.

The heightened security will not last forever, he said.

&#8220;If we do ever go to FPCON Delta there will be a minor inconvenience but, hopefully, it will last only a very short time,&#8221; he said. &#8220;Think of it as a typhoon. Everything shuts down and we sit in our quarters and wait it out.

&#8220;We should all prepare for these conditions the same way we prepare for typhoons. Watch the news daily.

&#8220;Keep extra supplies such as diapers, formula and medicines on hand in case you can&#8217;t get to the exchange or commissary for two to three days. Avoid coming on the base unnecessarily, as the lines will be long.&#8221;

However, most military officials throughout Japan and Korea were reluctant to discuss specific security measures to be taken once war starts.

That&#8217;s if the threat condition is increased at all.

&#8220;We won&#8217;t say for publication at this time what we may or may not do when and if operations commence in the Gulf,&#8221; said Lt. Col. Steve Boylan, 8th Army spokesman, in a written response to a Stars and Stripes query.

&#8220;To do so could be detrimental to all concerned, as any potential adversary could find out what we do at specific levels and what causes us to increase our force protection level.&#8221;

&#8220;We normally don&#8217;t discuss FP level and what is happening at those levels as for specifics,&#8221; Boylan said. &#8220;We do increase and decrease FP levels based on the threat and the assessment made at that time.

&#8220;Some would be inconvenienced, just like right after 9-11, but we would work through those issues. Essential services would continue and we would continue our missions.

An Air Force spokeswoman declined to discuss what specific changes in base operations might occur at Kunsan Air Base in South Korea.

&#8220;We take our direction from the president of the United States and he has made no decision about any military action against Iraq,&#8221; said the spokeswoman, Air Force 1st Lt. Heather Healy. &#8220;Therefore, we can&#8217;t speculate about any possible future events.&#8221;

It was the same story at Osan Air Base.

&#8220;We follow our guidance from higher headquarters and we will not discuss the specifics about our changes or force protection implementation procedures,&#8221; said Air Force Maj. Edwina Walton, a spokeswoman for the 7th Air Force and Osan Air Base.

A spokesman for the U.S. Navy in South Korea also declined to discuss what changes might occur at Chinhae Naval Base.

Ditto for the U.S. Navy in Japan.

The word circulating at Sasebo Naval Base and other bases in Japan early this week was that they would be locked down as tight as they were in the weeks after the Sept. 11, 2001, attacks.

At that time, among other restrictions, no vehicles were allowed on base in Sasebo, and handheld bags of any sort were inspected upon entering a gate.

However, no drastic changes are planned should war begin in Iraq, said Jon Nylander, a spokesman for Commander, U.S. Naval Forces Japan.

1st Lt. Jerald Black, deputy for plans and readiness for Yokota&#8217;s public affairs office, said Tuesday he could not go into specifics regarding what residents at the base in western Tokyo might expect if war is declared on Iraq.

However, he said security of the installation always is a concern and the degree of force protection can change when necessary.

&#8220;That&#8217;s definitely a possibility during the event of a confrontation with Iraq or North Korea, or an increase in the overall threat level,&#8221; he said. &#8220;Our security forces personnel have options to use on a recurring basis to assure they have the proper force protection level.&#8221;

He said until he hears otherwise, Yokota residents can expect somewhat normal conditions inside the base itself.

Misawa Air Base officials were unavailable for comment Tuesday because the base was involved in a previously scheduled combat employment readiness exercise unrelated to Iraq.

U.S. Forces Japan spokeswoman Master Sgt. Leah Gonzalez said commanders at individual installations in mainland Japan and Okinawa have the prerogative to adjust force protection levels as deemed necessary. &#8220;They also do that in coordination with their higher headquarters and the Defense Department,&#8221; she said. &#8220;I can&#8217;t say much beyond that.&#8221;

Lt. Col. Kevin Krejcarek, chief of public affairs for Kadena Air Base on Okinawa, said base residents could expect some minor inconveniences should FPCON Delta be declared.

Kadena had the toughest security on Okinawa in the wake of Sept. 11. A curfew restricting residents to their homes from 11:30 p.m. to 5 a.m. was in effect for months after those terror attacks.

Kadena also maintained 100 percent identification checks at the gates for months after they were relaxed at other Okinawa bases.

The bases were at FPCON Bravo early this week. Random ID checks and car searches were in effect. Extra guards have staffed the gates for several weeks.

For most people, gaining entry to the bases has remained smooth &#8212; but that may change when security ratchets upwards, said Wagner &#8212; who also suggested a few tips to make things a bit easier.

&#8220;In the higher two threat levels, I would suggest trying to turn left onto camp rather than to make a right turn across traffic,&#8221; he said in the newsletter. &#8220;Please avoid making unnecessary trips on board the camp if you can. Travel only with necessities in your vehicle as the sentries will be searching everything.