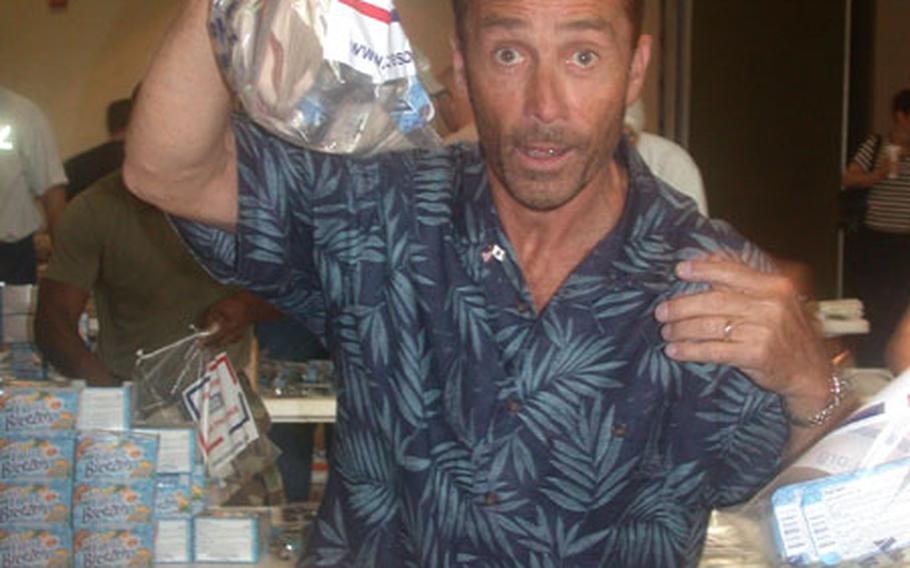 But the historic Army post traded that sedate image for merrymaking Thursday, as teams of shouting, singing, cheering servicemembers from all five military branches raced frantically to stuff 3,000 care packages destined for their counterparts in Iraq.

The first annual &#8220;Joint Services Ultimate Stuffing Challenge&#8221; was sponsored by the USO as part of the organization&#8217;s &#8220;Operation Care Package,&#8221; a project to collect donations from individuals and corporations and buy comfort items for deployed troops.

Stuffing parties have been held all over the country, and the USO has shipped over 300,000 care packages to date, according to Elaine Rogers, president of the USO of Metropolitan Washington.

The CD is a compilation of music from 18 country music stars, including The Charlie Daniels Band, Randy Travis, Hank Williams, Alabama and Martina McBride. A portion of the proceeds from sales of the CD will be donated to the USO.

The CD also includes a new arrangement of &#8220;God Bless the USA,&#8221; which Greenwood said he wrote while traveling in his private bus during a concert tour in the early 1980s.

Greenwood didn&#8217;t sing his anthem Thursday, but he did pitch in and help the Coast Guard team during the stuffing contest.

The Patriotic Country CD was included in each care package assembled Thursday. The most coveted items include a 100-minute international telephone calling card; a disposable camera; a desert-camouflage patterned toiletry kit; and a high-tech bandana designed to be soaked in cold water and wrapped around the neck.

But Thursday&#8217;s most sought-after prize was Foley, who in between stints helping the Army team stuff bags, was mobbed by servicemembers seeking autographs and snapping photos.

In fact, Foley said, he finds it reassuring.