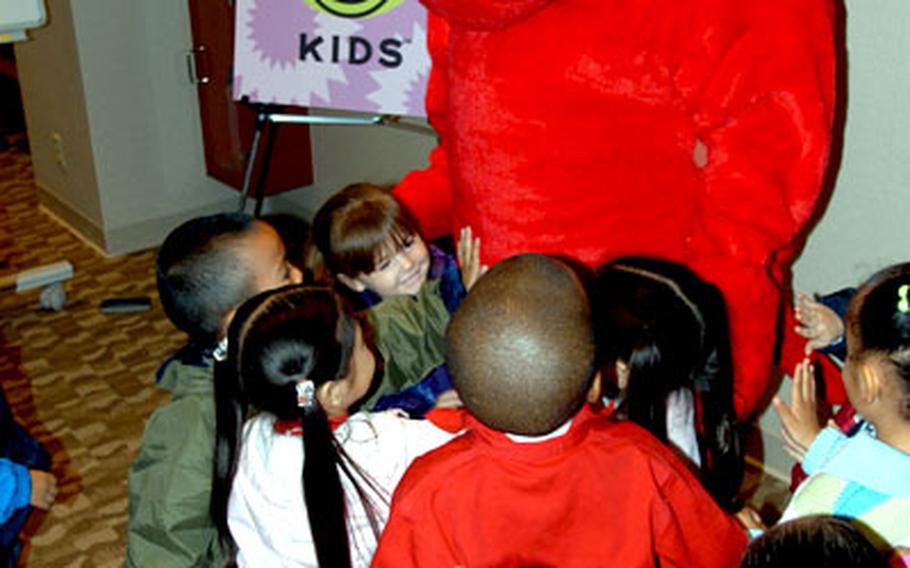 Kids at the Yoikio Child Development Center at Misawa Air Base, Japan, mob Clifford The Big Red Dog at the "PBS Kids Share a Story" literacy fair Friday at the Mokuteki Community Center. PBS Kids and Pacific Air Forces are teaming up to bring the popular characters from television and books to PACAF bases to promote literacy. (Jennifer H. Svan / S&S)

Kids at the Yoikio Child Development Center at Misawa Air Base, Japan, mob Clifford The Big Red Dog at the "PBS Kids Share a Story" literacy fair Friday at the Mokuteki Community Center. PBS Kids and Pacific Air Forces are teaming up to bring the popular characters from television and books to PACAF bases to promote literacy. (Jennifer H. Svan / S&S) 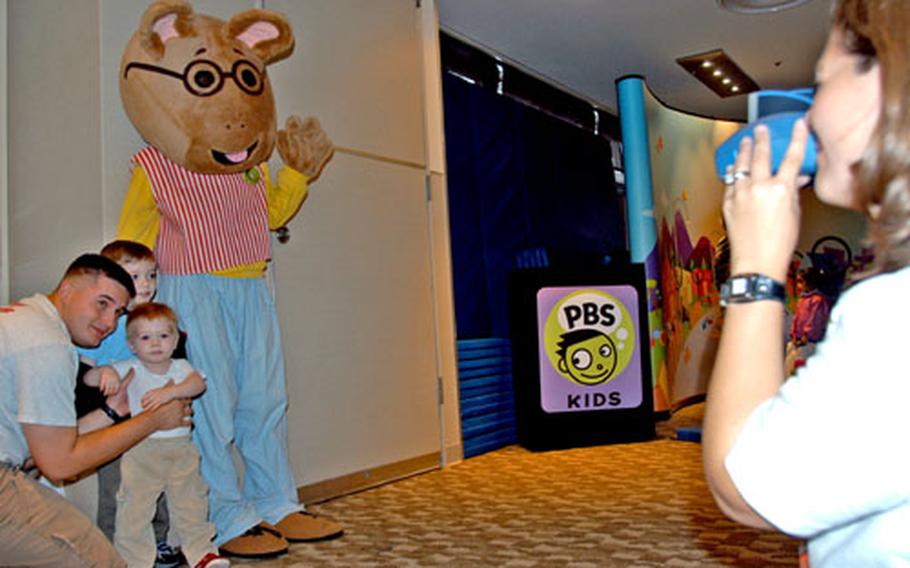 Senior Airman Cody Roberts and kids Zachary, 4, and Wesley, 1, get their picture taken Friday at Misawa Air Base, Japan, with Arthur, an aardvark from a PBS Kids&#39; show based on a book series by Marc Brown. (Jennifer H. Svan / S&S) MISAWA AIR BASE, Japan &#8212; A big red dog and an aardvark with spectacles came to this northern Japan base Friday with a message for parents, teachers and day-care providers: Share stories with your kids through reading, storytelling, singing, rhyming, acting and talking.

The &#8220;PBS Kids Share a Story&#8221; literacy campaign is visiting Pacific Air Force bases to underscore the importance of sharing stories and engaging in other language-rich activities with children at an early age.

PACAF last spring asked PBS Kids &#8212; the umbrella organization of a host of educational television shows for children &#8212; to bring their literacy fair to the Pacific, Brantley said.

&#8220;With a program like this, we can reach out to all our families and enrich their learning and life experience during their time in PACAF,&#8221; said Col. Frederic Ryder, PACAF services director, in a news release. &#8220;The events will also serve to provide a positive experience for family members affected by deployment.&#8221;

The campaign visits Yokota Air Base near Tokyo on Monday, and Osan Air Base, South Korea, on Wednesday. A trip to Kadena Air Base, Okinawa, was canceled due to Typhoon Tokage.

At Misawa, scores of youngsters had their picture taken with Clifford and the aardvark Arthur, both characters from popular PBS Kids&#8217; television shows, based on children&#8217;s books. They also received a new book and an activity booklet in which they could draw or write a story about their family.

Brantley said sharing stories, whether through reading, writing, drawing or just making up a tale, can help children become stronger readers down the road. Language-centered activities can teach children new vocabulary words, simple sentence construction and where a book starts and ends, she said.

&#8220;There&#8217;s a general concern across America that children entering school are not prepared,&#8221; she said, noting that by third grade, many students are not reading at grade level. &#8220;It breaks my heart to know how many children starting kindergarten don&#8217;t even know where a book starts.&#8221;

Barbara Treadway, a reading specialist at Kinser Elementary School on Okinawa, said statistics show that if a child is going to be competitive in the job market as an adult, he or she needs to have 10,000 hours of literacy experience &#8212; reading, writing, listening and speaking &#8212; before first grade.

Parents should read aloud to children every day, she advised, whether children are babies, in preschool or of school age.

In military families, Treadway said she sees a correlation between reading ability and the amount of time parents spend with kids.

Educational videos and television programming such as &#8220;Sesame Street&#8221; also can be good literacy learning tools, but both Brantley and Treadway said these shows should be watched in moderation and always with supervision.

Parents and educators can learn more ways to help children develop literacy and language skills at: www.pbsparents.org or www.pbs.org/teachersource.

Event is open to children in the base&#8217;s Child Development Center and school-age programs.