Stars and Stripes reporter gets physical with combat fitness test 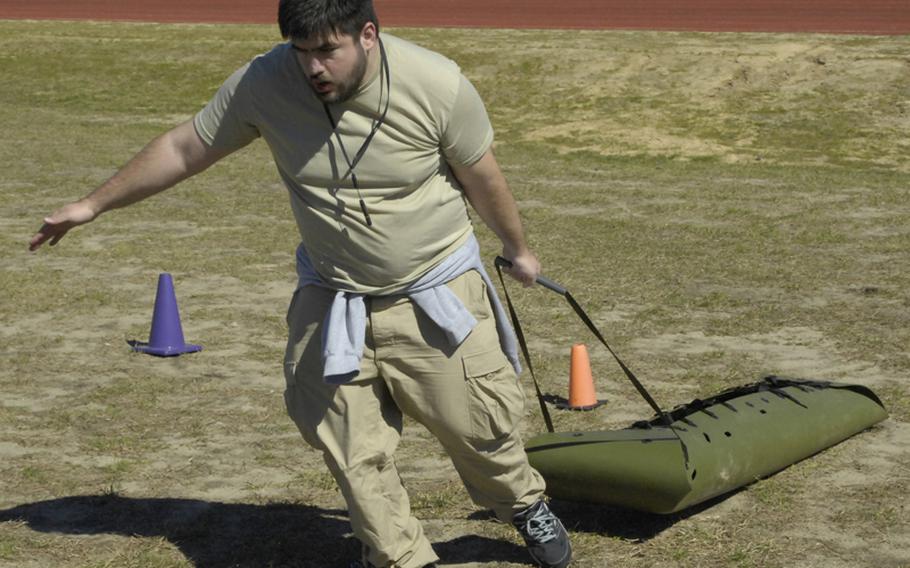 Then he met me.

On Tuesday, the Army unveiled two new proposed tests to measure soldiers&rsquo; physical fitness and combat readiness. If approved by the Army chief of staff, they would replace the current Army physical fitness test.

My job was to see how tough these exercises are, not an easy feat considering that when I did physical therapy for my legs growing up, I felt most comfortable working out with stroke victims because we ran about the same pace.

Throwing caution to the wind, I showed up at Fort Jackson in my cargo pants and wicker shirt that leaves far too little to the imagination.

First, drill sergeants demonstrated the physical fitness test, going from the shuttle run to the long jump, and knocking out push-ups seemingly effortlessly. Then two soldiers ran through the combat test, which includes an obstacle course.

It all looked so easy, until &mdash; when my media colleagues were distracted &mdash; I tried it myself.

Rispress was patient and kind as he walked me through the exercises.

To my great relief, I did not throw up when I did the shuttle run, colorfully known in the sports world as a &ldquo;suicide.&rdquo; I managed to run a total of 60 yards in 20 seconds, and I had figured it would take me a week.

And I successfully avoided ripping an Achilles tendon on the long jump, even though I stumbled back so far on my first attempt that I ended up practically at the starting line.

I also managed to drag a sled with 180 pounds of weight on it, giving me the confidence that if push comes to shove, I could haul roughly half of my own weight.

Trying to balance on a board while carrying two ammunition cans proved more difficult. I looked like a drunk trying to pass a sobriety test on St. Patrick&rsquo;s Day.

But there was one exercise that nearly did me in: &ldquo;the rower.&rdquo;

The exercise requires you to lay flat on the ground and then do a sit-up while raising your legs toward your chest. It was probably designed by the inquisitor-general to extract confessions from accused heretics.

A drill sergeant who had demonstrated the exercise managed to do 38 reps within a minute. But when it was my turn, nothing quite worked right. While I was able to contort my body into a sitting position, I didn&rsquo;t manage to do a single one correctly.

When it was over, I asked Rispress how I ranked among the less stellar recruits he has seen.

&ldquo;I&rsquo;ve never seen them not be able to do &lsquo;the rower,&rsquo;&rdquo; he said. &ldquo;I&rsquo;m trying to be as polite as possible. ... So, I&rsquo;ll leave it at that.&rdquo;