Stars and Stripes publisher Kelsch to retire in 2007 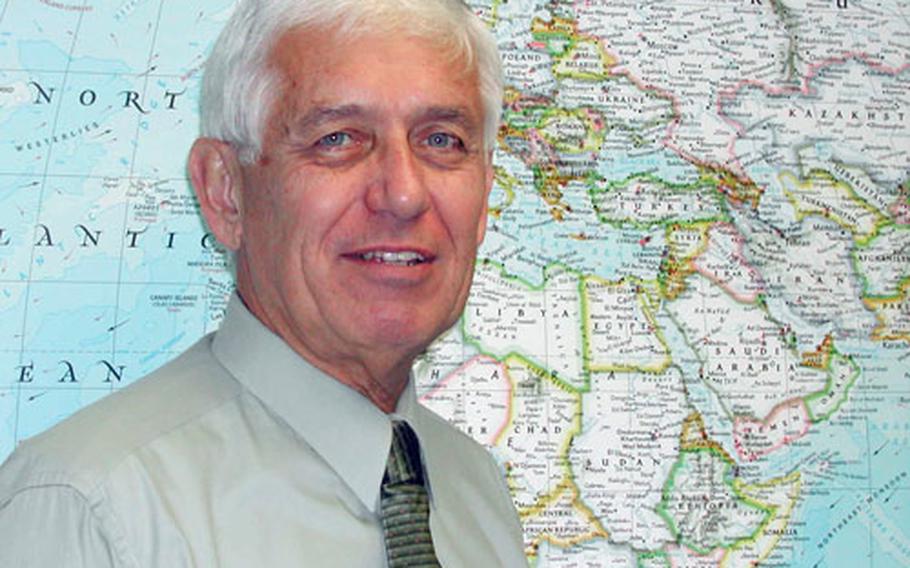 Stars and Stripes Publisher Tom Kelsch on Friday announced his retirement, effective in the summer of 2007. (Pat Dickson / S&S)

WASHINGTON &#8212; Stars and Stripes publisher Thomas Kelsch announced Friday that he plans to retire from his position in the summer of 2007.

Named Stripes&#8217; publisher in 1999 &#8212; the first civilian to hold that position &#8212; Kelsch has, among other accomplishments, presided over a return to the paper&#8217;s historical mission: serving U.S. military members in war zones.

&#8220;In the buildup to the second Iraq war, it became obvious that there was a lot of United States military congregating in the Middle East &#8212; at that time, in Kuwait, [and they] did not have access to the news that they needed,&#8221; said Kelsch. &#8220;And they were not being covered by reporters to any degree, which is the essence of Stars and Stripes&#8217; mission.&#8221;

Stripes had been serving readers in Afghanistan before that, but the number of troops was low, and thus papers were flown into Bagram from Germany.

Currently, Stripes has print sites in Iraq, Kuwait, Afghanistan, Qatar and Bahrain, and distributes tens of thousands of copies to servicemembers in those areas. Its traditional print sites operate in Germany, Italy, Japan and South Korea. Its reporters are constantly in the war zones.

Kelsch came to Stripes as editor of the European edition in September 1996. Soon after, he was named &#8220;Central Editor&#8221; and moved to Washington to oversee the consolidation of Stripes&#8217; two papers into one.

Under a consolidation plan conceived in the 1980s and executed during the 1990s, the paper became one organization, based in Washington, with much of its news-gathering staff as well as some advertising and distribution functions remaining in the two theaters.

&#8220;Tom Kelsch oversaw some of the most momentous changes and challenges Stars and Stripes faced in half a century &#8212; and he did so with competence and civility,&#8221; said David Mazzarella, editorial director. &#8220;At every turn, he effectively championed the paper&#8217;s editorial independence and First Amendment protections. And he never told me what to print.&#8221;

Kelsch said that was a conscious decision.

&#8220;I have chosen to be hands-off on editorial decisions. The job description, the way it&#8217;s set up, the publisher is responsible for and in charge of editorial.&#8221; Instead, Kelsch said, he felt the paper was best served by acquiring the resources for the staff to do its job.

Before Kelsch became publisher, the paper was run by military officers. That no longer is the case.

&#8220;Tom has been an effective and committed leader of Stars and Stripes,&#8221; said Allison Barber, deputy assistant secretary of Defense for Internal Communications and Public Liaison, under whom Stars and Stripes falls. &#8220;Tom knows that our customers, the men and women in the military, are the number one priority and he has performed nobly in his service to each of them.

Addressing Stars and Stripes&#8217; role downrange, Kelsch said, &#8220;In order to distribute the paper, or for that matter, to cover the Middle East, it was clear that we needed help from the military. We talked to commanders in the field about the necessity for soldiers to have access to Stars and Stripes, and we also made presentation to the Department of Defense,&#8221; securing the needed contingency funds to operate downrange.

&#8220;Covering the military fighting a war and distributing the paper to the soldiers is exactly what Stars and Stripes was created to do.&#8221;

Stripes operates under a congressional act as an independent First Amendment newspaper. Its mandate is to provide a full news report with emphasis on local news of the military bases and areas of operation.

Referring to the Mideast, where so many Stripes readers are located, Kelsch said: &#8220;The military fighting the war are operating in extremely difficult and dangerous circumstances. We can only admire the effort they are putting in.

At the same time, the paper under Kelsch has sought to strengthen its presence in the traditional areas of coverage &#8212; Europe and the Pacific &#8212; and in the United States, with special sections, including new weeklies in the United Kingdom and Guam, and a constantly growing Web site.

&#8220;Mr. Kelsch used every technological opportunity to make the paper better, more relevant, and as accessible as possible,&#8221; said Max Lederer, Stripes&#8217; chief operating officer. &#8220;His creativity and ingenuity placed Stars and Stripes at the forefront of many industry advancements.&#8221;