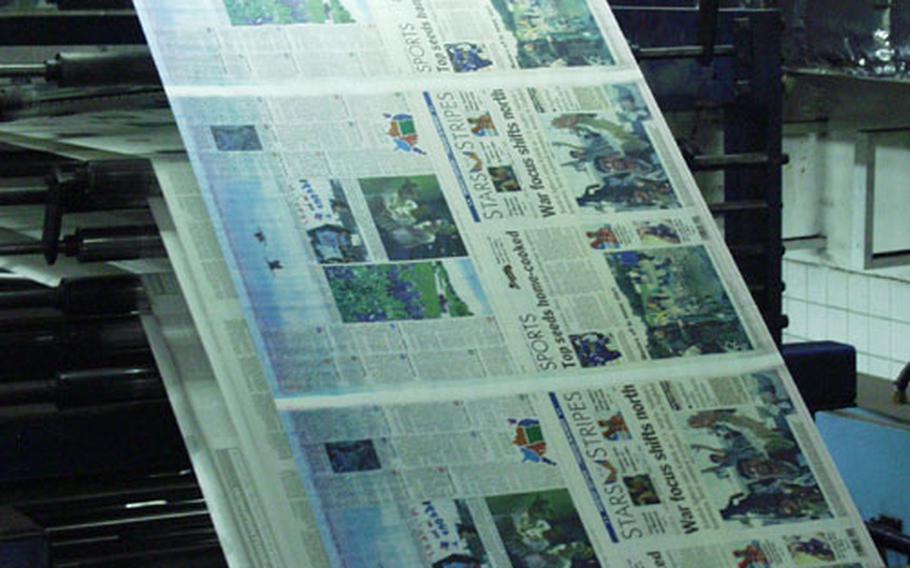 The first Mideast Edition of Stars and Stripes rolls over the presses in Kuwait City in Friday. This is the first-time the paper has been published in the Middle East. Paper officials say this will speed delivery of the newspaper to American troops deployed in the desert. (David Josar / S&S)

The first Mideast Edition of Stars and Stripes rolls over the presses in Kuwait City in Friday. This is the first-time the paper has been published in the Middle East. Paper officials say this will speed delivery of the newspaper to American troops deployed in the desert. (David Josar / S&S) 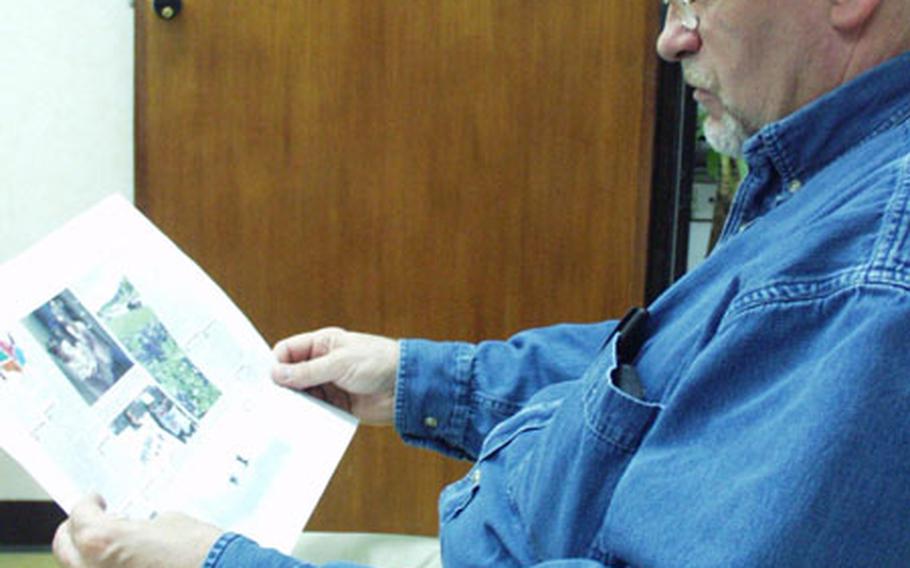 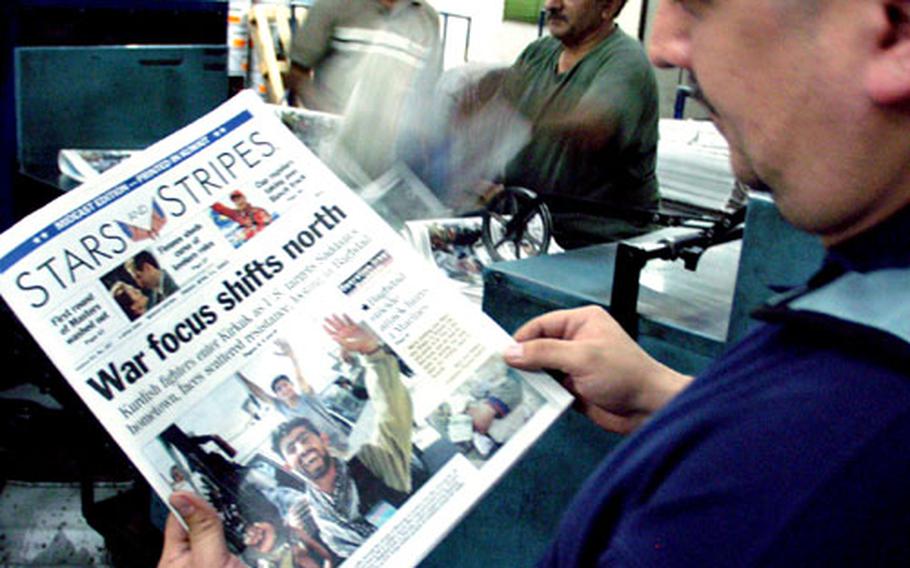 Stars and Stripes production manager Ron Garcia checks the quality of Friday’s Stars and Stripes new Mideast Edition. This is the first time the paper has published in Kuwait City. (David Josar / S&S)

KUWAIT CITY &#8212; Stars and Stripes made history shortly after 4 a.m. Friday when that day&#8217;s edition of the newspaper rolled off a Kuwaiti press for distribution to troops serving in Iraq and Kuwait.

With &#8220;Mideast Edition&#8221; printed at the top of Page One, about 11,000 copies were printed in Kuwait City and transported in three sport utility vehicles and a pickup truck to the mail terminal near Camp Doha for distribution to troops via the military mail system.

Before and during the Persian Gulf War 12 years ago, more than 100,000 copies of the newspaper were sent to troops serving in Saudi Arabia.

Stars and Stripes is an editorially independent newspaper that is printed to get news of the world, the United States and the military into the hands of U.S. troops serving overseas.

The paper receives a percentage of its operating costs from the Department of Defense, but most of its revenue is self-generated.

In recent months, Stars and Stripes opened a bureau in Kuwait City, staffed by an editor and a reporter, and has several staffers embedded with military units in Iraq and on a U.S. Navy ship in the Persian Gulf.

As the presses began to rumble Friday, Stars and Stripes Production Manager Ron Garcia skimmed the first few copies, working with printers to improve color in the 48-page paper that had the lead headline: &#8220;War focus shifts north.&#8221;

The paper also included comics, sports, and stories about Gospel Week in Nashville, a memorial service aboard the aircraft carrier USS Kitty Hawk and U.S. troops in Germany preparing to deploy to Iraq.

&#8220;It takes work to get this process going,&#8221; said Garcia, who, along with other Stripes officials, spent six months finding a plant in Kuwait City. He said Bahrain and Dubai also had been considered as printing sites before the Kuwait plant was chosen.

The new printing plan seemed to be a natural step for the paper to take.

&#8220;In the longer-range view, it reflects the shift in emphasis and troop strength of the military toward that part of the world,&#8221; Kelsch said.

Stripes circulation director Dan Holland said the Kuwait facility speeds the time it takes to get papers into the hands of U.S. servicemembers in the Middle East.

Until Friday, papers were flown in from Germany, where the European edition does most of its printing. Kelsch said the Kuwait facility is also more affordable.

During the 1991 Gulf War, the U.S. European Command bought the newspapers from Stripes and used the command&#8217;s logistics resources to deliver the papers to troops. Now, the military command is buying the newspaper, but Stripes is responsible for getting the newspaper to Kuwait for distribution.