Stars and Stripes begins printing papers at plant in Baghdad 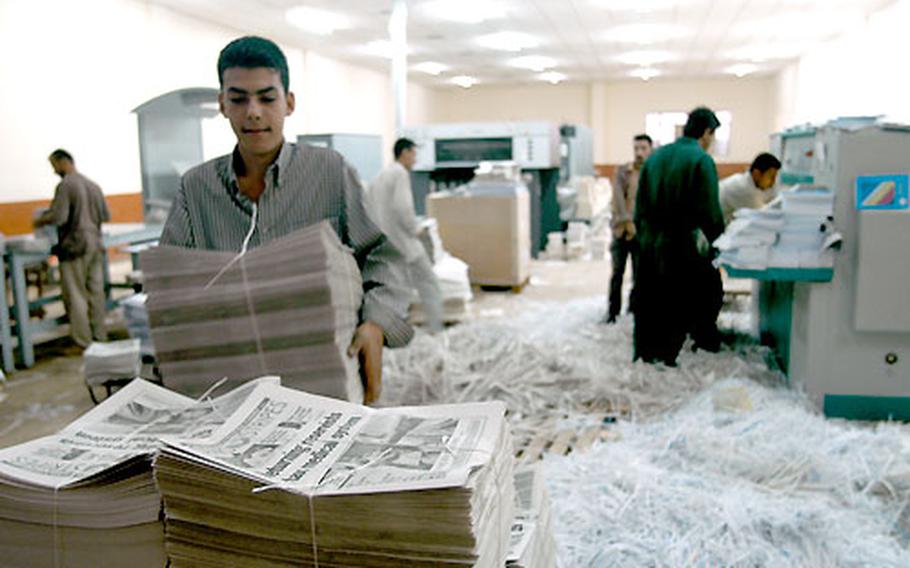 BAGHDAD &#8212; With a pre-dawn press run Tuesday, Stars and Stripes began printing an edition of the GIs&#8217; newspaper in the capital city of Iraq six months after the fall of Saddam Hussein&#8217;s regime.

This should provide 80 percent of the troops now stationed in Iraq with same-day delivery of the newspaper, said Robert Reismann, the newspaper&#8217;s representative in Iraq.

A contractor will carry the papers from the al Sabah printing plant to Baghdad International Airport, where mail trucks and airplanes will transport them to the camps scattered across the country.

The effort is reminiscent of the newspaper&#8217;s World War II days, when the paper was printed on captured printing presses as the front moved across Europe.

The paper&#8217;s first edition was printed in 1861 after Union troops captured the town of Bloomfield, Mo., and discovered a working press. The town has established a museum dedicated to the newspaper.

&#8220;Iraq is still an unstable and potentially dangerous place to do business,&#8221; said Tom Kelsch, the newspaper&#8217;s publisher. &#8220;But that is where our troops are. And the mission and responsibility of Stars and Stripes is to get a daily newspaper to the troops abroad.&#8221;

Kelsch said the news supplied by Stars and Stripes is most important when conditions for troops are difficult. The only practical way to provide timely delivery of the newspaper, he said, is to print it as close as possible to the troops.

The initial press run was 5,000 copies, but, Reismann said, the hope is to boost it to nearly 15,000. The newspaper is paid for by sponsors and is free to the troops.

The edition distributed in Iraq is the same one printed in Kuwait City. That printing operation began in April and has been supplying the newspaper in Iraq up to now. It has a current press run of 15,000.

Thomas Bowman, assistant print plant manager for Stars and Stripes in Germany, was in Iraq to oversee the printing.

His only complaint was the lack of color in the newspaper. The plant lacks the equipment to print the color pages Stripes readers expect, but efforts are under way to overcome that problem.

Najem Saadoum, production manager for al Sabah, said he expects the equipment to arrive from Jordan in a week or two.

He said the opportunity to print the newspaper for the American military is a good one for al Sabah, which prints several newspapers for Iraqi readers.

Stars and Stripes, which is funded in part by the Pentagon but retains editorial independence, has been published continuously in Europe since April 1942. It has editorial and administrative offices in Griesheim, Germany, and in Washington, D.C. An edition of the newspaper for the military in the Pacific region has offices in Tokyo.