Staring down the odds: Medal of Honor recipient Lewis Millett tells the story of his Army career 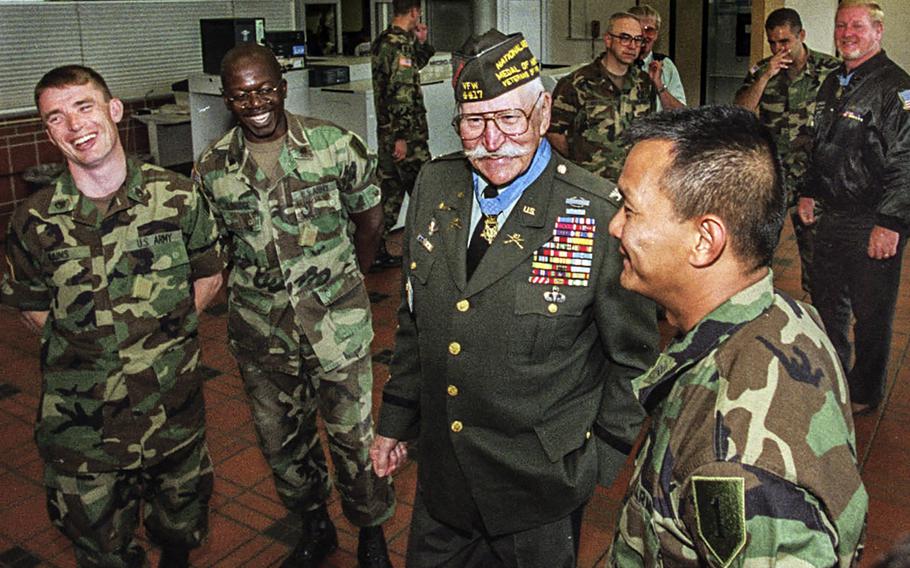 At Rhein-Main Air Base, Germany, in August, 1997, Sgt. 1st Class Jeffery Rains, left, and Spc. Jeffery Aldridge, both stationed in Bamberg, and an unidentified soldier share a laugh with Medal Of Honor recipient Lewis L. Millett at the air terminal. At upper right is Vietnam War Medal Of Honor recipient Sammy L. Davis. Millett, a native of tiny Mechanic Falls, Maine, earned the nation's highest military honor by leading a bayonet charge during the Korean War. (Ken George/Stars and Stripes)

FRANKFURT, Germany — Retired Army Col. Lewis Millctt should have died a violent death years ago, but the Medal of Honor recipient has made a career of defying the odds.

His bushy red mustache has long since turned white, his belly has grown considerably, and he walks slower at 76 than he did at 30, when he earned the medal.

But he still travels around the world retelling his story.

Millett was m Germany Aug 18 to 22 to visit troops and see off soldiers headed to Bosnia. He was joined by Capt. Robert Nett and Sgt. 1st Class Sammy Davis, two other Medal of Honor recipients from World War II and Vietnam, respectively.

It's been more than 20 years since Millett's worn Army greens every day, but the age melts away from his face and a fire blazes in his eyes when he recounts his own soldier years — especially the events of Feb. 7, 1951.

That's when Capt. Millett led his unit up a hill and into a battle in Korea that, against all odds, they won.

Not bad for a guy who was court-martialed for desertion eight years earlier.

Historians figure there were about 300 North Koreans and Chinese on that hill, armed to the teeth with automatic rifles, anti-lank weapons and grenades.

Millett had 100 soldiers m Company E, 27th Infantry Regiment, armed with rifles, grenades and bayonets they weren't even supposed to have.

"I heard the Chinese say Americans were afraid of cold steel," Millett said, referring to the bayonets "Hell, the history of me American Army proves otherwise, and I figure I had to prove it to them "

Millett scrounged for the bayonets for his company, grabbing them where he could.

He learned how to use one while fighting with the Canadians in 1941, and he passed that knowledge onto his soldiers.

It was still daylight when his regiment tore up the hillside.

"(The North Koreans and Chinese were equipped with) heavy artillery machine guns, and they were throwing grenades at us," he said.

"At that particular time, grenades weren't as lethal, but they could still hurt you We ducked and dodged left and right. But one grenade bounced off my shin and exploded in front of me."

Despite the grenade fragments lodged in his leg, the captain shouted encouragement to his company and pressed forward.

That's when a North Korean swung around with a machine gun.

Millett and his company continued stabbing with their bayonets, throwing their grenades and using their rifles to shoot and club the enemy.

"I was like a crazy man going up that hill," he said.

Twelve American soldiers died in the fight. The North Koreans and Chinese lost 157 before they fled.

President Truman presented Millett with the Medal of Honor at the White House on July 5, 1951.

Truman "told me, 'I'd rather have this (medal) than be president of the United States,' " Millett recalled of his meeting with the World War I veteran.

The attack on that Korean hillside was the third and final time his company or any other American unit would use the bayonets as a primary weapon in battle, he said.

"We were ordered not to (use the bayonets anymore). Our superiors were afraid we'd get killed, and they were probably right," he said.

But that day in Korea wasn't the first or last time Millett would cheat the Grim Reaper after enlisting in the Army in 1940 at age 18.

The Army was a family tradition. His great-great-great-grandfather was killed in a war between Indians and colonists in 1675.

Other Milletts fought in the Revolutionary War, Civil War and World War I.

Those plans were almost scuttled when President Franklin Delano Roosevelt promised the world that no American blood would be spilled on foreign soil.

"I said the hell with that, and I deserted," Millett said.

He made his way to Canada and joined that country's army.

But after the United States entered World War II in 1941, he transferred back.

He was told not to worry about the desertion So he didn't, and no one else did for two years — a period during which he earned a Silver Star after he shot down a German ME-109 over Italy and was promoted to sergeant.

Then, in December 1943, his records caught up with him. He was court-martialed for desertion and found guilty. The Army fined him $52 and sentenced to six months hard labor,

"But NCOs didn't do hard labor,' he gunned.

Six months later, Millett was given a battlefield promotion to second lieutenant.

After the fighting was over, he figured so, too, were his active-duty days. He joined the Army National Guard and went to Bates College.

But m 1949, a year shy of graduation, Uncle Sam began looking fort active duty officers, and he donned the uniform full-time once again.

He was about to get kicked out of the Army in 1950 through a reduction in force when the Korean War broke out. Millett was shipped to Korea, and in three months was promoted to captain.

The battle that earned him the Medal of Honor and a trip to the White House took place a few months later.

But be got more than a medal in Washington. He met his future wife, Mona, who was in town to see her cousin also get the Medal of Honor.

After a whirlwind romance burning up the telephone lines for a few weeks, the two met in Las Vegas and married.

"She was a hell of an Army wife," he said in a choked-up voice.

Millett finished his degree and stayed in the Army.

"After fighting all those damn wars, I figured I might as well stay in."

In 1975, his youngest son, John, continued the family tradition and joined the Army at 17. Millett swore him in and then re-enlisted him.

But John Millett's career was cut short when he was killed in a plane crash in Newfoundland on Dec. 12, 1985

He was one of 258 soldiers who perished m the chartered military plane that was returning soldiers from a six-month peacekeeping stint in the Sinai. Millett's wife had a massive heart attack when she heard the news, never recovered and was bedridden for the rest of her life.

"I fought in three wars and should have been dead a long time ago," Millett said after a lengthy pause, "Who dies? My youngest son."

Tears well in his eyes, and the Medal of Honor recipient falls silent.

In an instant, the age returns to Millett's 76-year-old face as he takes off his glasses, wipes his eyes and shakes his head.

He breathes deep, stares at his hands and sighs for an agonizingly long time.

Rumors circulated that the plane crash was the result of a terrorist attack, but it was never proved.

Still, it's clear that Millett believes the aircraft was sabotaged.

"They blew it up," he said. The airplane crash over "Lockerbie was fully investigated, but not my son's."

Despite the tragedy, Millett remains an Army man.

"There's no comparison between the military society and civilian society," he said. "With all the bad things that happen, the stupid politicians, we're still the most free country in the world because of our military."

It's time for Millett to board his airplane back to the United States.

He stands up and straightens his powder-blue jacket with its Medal of Honor Society patch sewn on the front.

Millett once again looks like the soldier who charged up a hillside 46 years earlier as he turns and walks toward his airplane home.