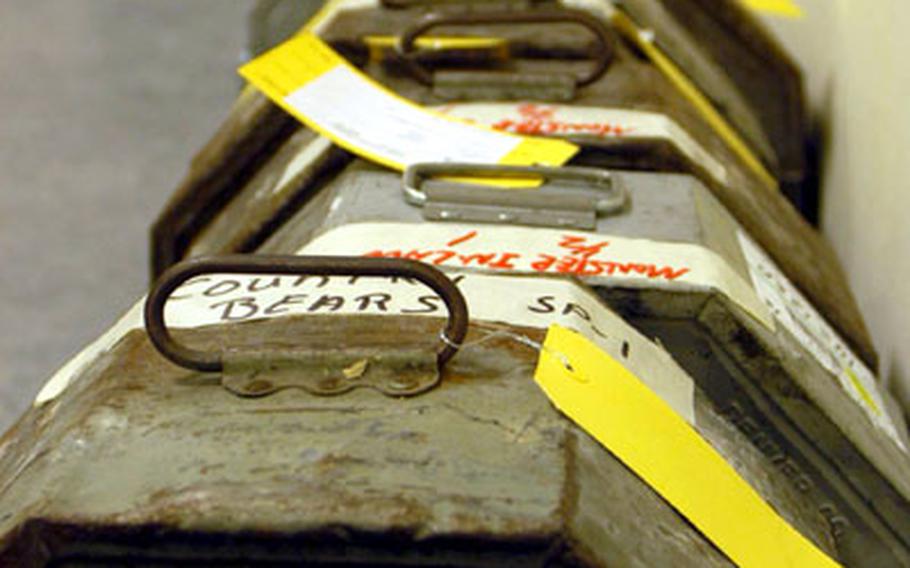 Theatergoers at Aviano Air Base will be watching movies from these reels over the next few days at the new base theater/mass briefing complex. (Kent Harris / S&S)

Theatergoers at Aviano Air Base will be watching movies from these reels over the next few days at the new base theater/mass briefing complex. (Kent Harris / S&S) 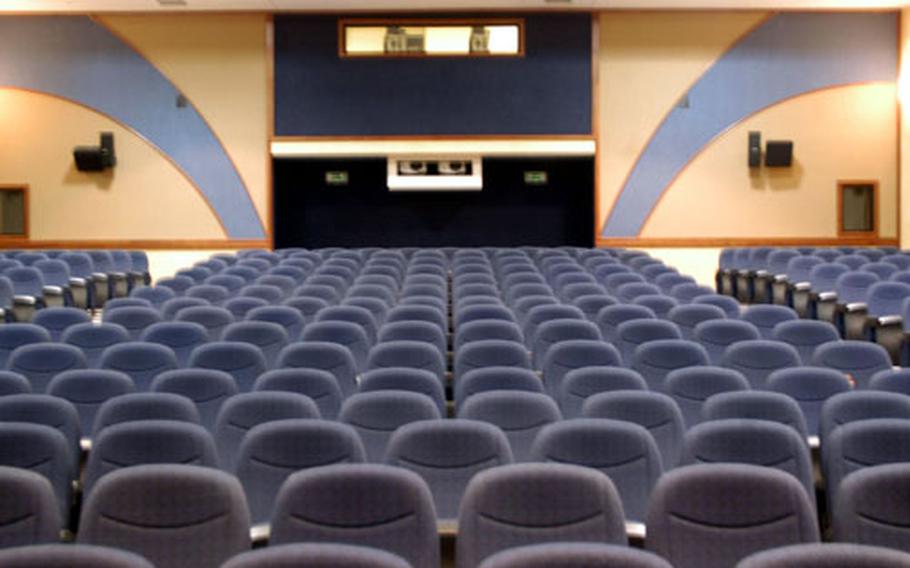 Aviano Air Base’s new mass briefing facility, which opens Friday, will double as the base theater. The Army and Air Force Exchange Service installed new equipment and the complex can seat 302 movie patrons. The facility is near the commissary/exchange complex. (Kent Harris / S&S)

The newest facility at a base where seemingly everything else is new opens Friday with a triple screening of &#8220;Star Wars III: Revenge of the Sith.&#8221;

The $3.4 million complex, which will serve as a theater and mass briefing facility, is a long time coming. It was one of five projects in the massive Aviano 2000 construction project that were left in the lurch when an Italian company building them ran out of money. Bulfinger-Berger, a Germany-based construction company, took over and will turn over several of the projects to the Air Force this summer.

The theater/MBF is the first. It replaces a smaller, older complex the equivalent of a few blocks away. The new facility has 302 seats &#8212; 102 more than the old one. It also sports new chairs &#8212; with cup holders to hopefully cut down on spills that sometimes made the old theater an adventure to walk in.

The building is close to the commissary/exchange complex and construction originally started soon after that opened in 2001. But the contractor&#8217;s financial woes meant no progress was made for months. The base&#8217;s new post office, set to debut later this summer, will share a wall. A new Family Support Center will be built on the other side of that. A new Child Development Center will open on the other side of a large, red and white brick plaza from the theater.

Steve Juhasz from the base&#8217;s Project Management Office &#8212; which supervises Aviano 2000 construction projects &#8212; said the openings would create a domino effect. The portable building currently serving as a post office will be used for package pickups. The current facility for that, located near the old theater, also could be open for a new tenant.

But the theater takes center stage Friday, with movies set for 2, 5 and 8 p.m. AAFES-supplied new equipment, including a separate sound system, after NATO funds paid for the briefing facility.

Juhasz said the theater&#8217;s debut would draw more attention than many projects, partly because of its central location.

Inside, it resembles a modern theater one would see in the States &#8212; minus the $10 admission tickets.

Movies will still cost $2 for kids and $4 for adults.

Admission to the mass briefings? Most likely free (and mandatory).