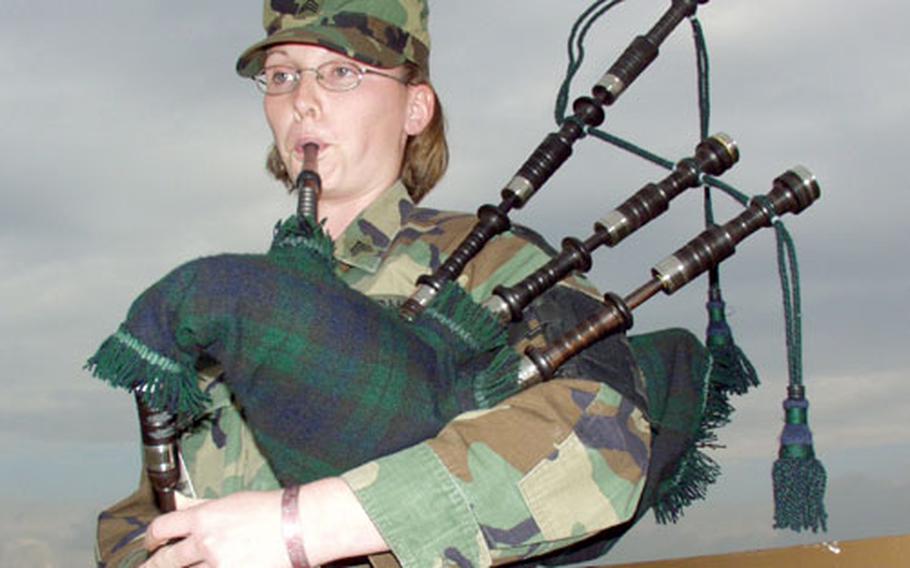 CAMP BONDSTEEL, Kosovo &#8212; Rachel Brown is boldly going where no sergeant in Kosovo has gone before.

But the petite, brown-haired, light-eyed sergeant hardly seems geeky when she explains that she plans to play for the elderly and the sick.

Brown said that &#8220;Star Trek&#8221; creator Gene Roddenberry, a self-proclaimed humanist, is her inspiration to do volunteer work of this type.

Her club has already sponsored a 5-year-old child from Guatemala and gives out donations to the needy during the holidays.

Brown, who is currently the club president, said she hopes to learn the harp well enough to do Harp Therapy for the elderly, a program that helps people relax and feel better through music, when she gets back to her hometown of Bensalem, Pa. She is now stationed at Camp Bondsteel, Kosovo, with the 56th Brigade, 28th Infantry Division of the Pennsylvania National Guard.

Within a year, Brown has learned a couple of songs, an accomplishment which she said makes her proud since her only background in music was from choir in high school, dance and a year of piano in college that &#8220;didn&#8217;t go too well &#8212; too many keys.&#8221;

&#8220;I wish I had my instructor here,&#8221; Brown said as she tries to master the more complicated notes, called grace notes.

But she&#8217;s getting it down. In fact, she has already played for the Camp Bondsteel community during the last Sept. 11 anniversary observance. She finished out the somber ceremony with &#8220;Amazing Grace.&#8221;

Now, along with improving on the bagpipes, learning the harp and being a military intelligence analyst during the night shift for the 56th Brigade&#8217;s Headquarters and Headquarters Company, she has started teaching after a few requests came in.

Master Sgt. Charles J. Shaw, one of her students, said the 23-year-old instructor is a stickler for rules and is allowing him to begin his lessons only on the mouthpiece, which is kind of like a mini-clarinet.

Brown said she would take both of her students as far as she can, but suggests they find a pipe master when they leave Kosovo.

Now, with her deployment nearly over, Brown said the first thing she&#8217;s going to do when she gets home is get some one-on-one time with her musical instructors and then hit the town.

Brown is also in a parade band called Lord of the Isles out of Ivyland, Pa. Her main goal is to be able to play for the Memorial Day parade after long and hard studying over the summer.

It all may seem light years away now, but Brown said she is going to stick to it and meet her goals.

&#8220;Most of the things I do are also based on the ideals the Army holds as its values. I can do what I do with self-discipline, both in my personal and military life,&#8221; Brown said.