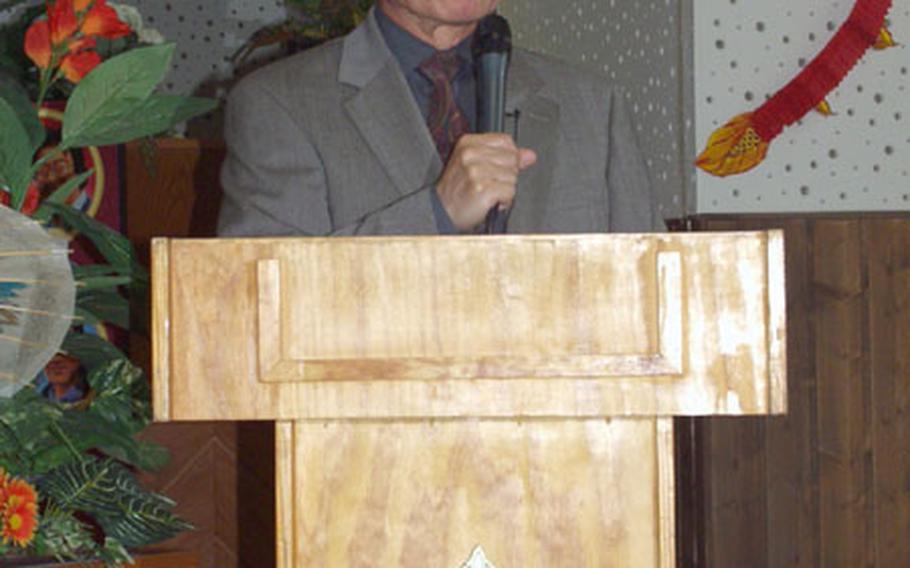 While many in Hollywood have denounced the U.S. military&#8217;s role in Iraq, one star is talking to soldiers in Europe about the role they play in the world.

Takei, who was visiting serval military installations in Germany in part to celebrate Asian Pacific American Heritage month, added, &#8220;What the United States stands for is important to the entire world. Now, the fact that we see the military really reflecting the diverse social make up of the United States is amazing.&#8221;

Takei also told the group how he and his family were forced into an internment camp by then President Franklin D. Roosevelt after the bombing of Pearl Harbor, Hawaii.

They, and thousands of others, were placed behind the barbed wire at Camp Rohr in the swamps of Arkansas because &#8220;we simply happened to look like the enemy.&#8221;

Takei, who was 4 at the time, said he could still remember soldiers with guns coming into his home in Los Angles and ordering the family out of the house.

&#8220;I learned to recite the Pledge of Allegiance to the flag with the view of the barbed wire fence, the guard tower, the sentries guarding over us from the window of my kindergarten barracks. I recited those words without understanding the irony of it; &#8216;with liberty and justice for all.&#8217; &#8221;

Slowly Japanese-Americans changed their place in America, with feats such as entering the U.S. Army with the all Japanese-American unit, the 442nd Regimental Combat Team, with the motto &#8220;Go For Broke.&#8221;

&#8220;They were going to give it their all,&#8221; Takei said. &#8220;The fought with extraordinary valor on bloody battles field of Italy, France and finally Germany. They suffered the highest casualty rate of any unit in the Second World War.&#8221;

Takei said because of the awards and hard work the 442nd Regimental Combat Team received, as well as other all-Asian military units, this opened the door to Asians becoming excepted into America.

He said because of these pathfinders, Asians were able to become what they wanted to become and raise as high as their talent could take them.

Takei visited seven communities to help celebrate the Asian Pacific American Heritage month in Germany. During his visit, he spoke with fans, signed photographs and books, and learned the military way of life.

&#8220;I shared with you today my Asian Pacific American heritage,&#8221; he said. &#8220;But that heritage is also a part of your American heritage, because America is a nation not founded on race, but by a common set of ideals."