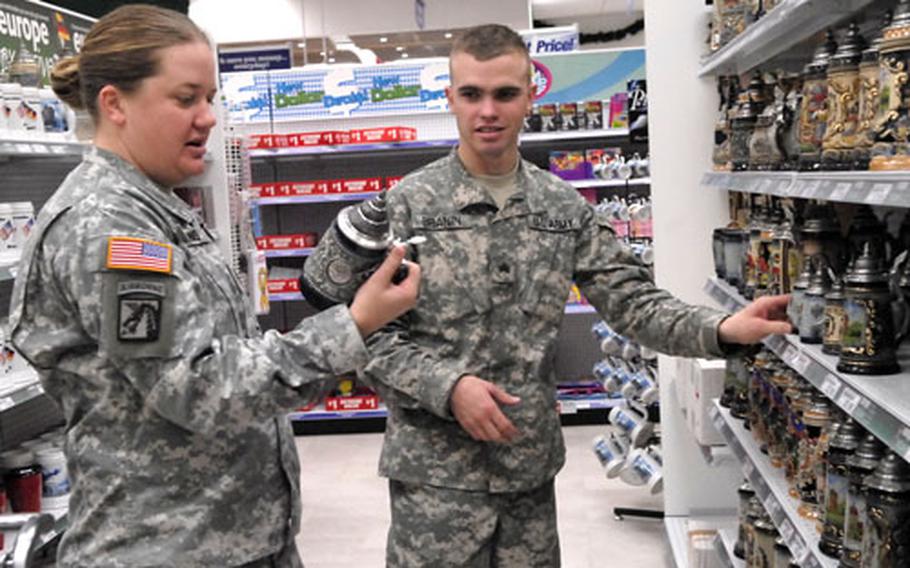 Sgt. Cody Branin, with the Utah National Guard&#39;s 115th Engineer Battalion, checks out beer steins at the post exchange in Grafenwoehr, Germany this week with Sgt. Melissa Binns, who is with the same unit. Both plan to buy most of their Christmas gifts with the Military Star Card. (By Charlie Reed / S&S)

Sgt. Cody Branin uses his Military Star Card whenever possible.That requires shopping with the Army and Air Force Exchange Service and its associated vendors. But the savings and convenience that come with the military&#8217;s line of credit outweigh the exchanges&#8217; limited selection, he said. &#8220;It&#8217;s worth it,&#8221; said Branin, who is working in Grafenw&#246;hr, Germany, with the Utah National Guard&#8217;s 115th Engineer Battalion. Star Card&#8217;s interest rate is much lower than his civilian credit cards and many exchange buys are tax-free, he said. Branin, who became an avid online shopper while in Iraq last year, said the free gift-wrapping and shipping options at AAFES.com make it easier to get presents to family and friends.&#8220;And it&#8217;s easy to deal with them when you get deployed,&#8221; Branin said. &#8220;You don&#8217;t have to do as much paperwork as with civilian credit cards. The customer service is good.&#8221;About 1.5 million servicemembers and other military ID card holders worldwide have a Star Card, according to AAFES. And there will be even more by the new year with the boom in Star Card applicants during the holiday season. On average, about 13,000 people apply for the military line of credit each month, though that number jumps to between 18,000 and 20,000 during November and December, said AAFES spokesman Lt. Col. David Konop. &#8220;People who have never used the card in the past apply this time of year,&#8221; Konop said. But just as with any line of credit, the Star Card can lead to unwieldy debt if users spend above their means. &#8220;Use it as a payment device, not a credit device,&#8221; said Jean Ann Fox, director of financial services for the Consumer Federation of America in Washington, D.C. &#8220;Pay off your credit card at the end of each month,&#8221; Fox said. &#8220;Even with lower interest you have to be careful you don&#8217;t overextend yourself and never get out of debt.&#8221;Members of the military are a highly targeted demographic among creditors, said Fox, whose organization lobbied for the Military Lending Act that took effect Oct. 1. The new law caps interest rates on certain types of loans, such as payday advances, made to servicemembers anywhere in the world including Internet transactions. &#8220;Military families are more susceptible to predatory lending practices because they&#8217;re young, they&#8217;re just getting started, they&#8217;re not getting paid a lot and they have young families with a lot of needs,&#8221; Fox said.The steady income and link between financial stability and promotion make servicemembers very reliable customers, Fox said. &#8220;But that doesn&#8217;t mean you still can&#8217;t get into debt,&#8221; she said. Branin agrees. Though he said his finances are in order, he has seen friends get in over their heads using the Star Card to buy expensive electronics and other big-ticket items. &#8220;They probably give you more credit than you need,&#8221; he said. Though AAFES offers the Star Card to help drive business, it also looks out for its customers more than other creditors, Konop said. &#8220;We have (credit) counselors that help customers if somebody has erred in credit or is unable to pay. We try to prevent problems up front,&#8221; he said.

Eligibility and credit line: Are based on applicant&rsquo;s credit history.

Where you can use it: Along with AAFES retail stores, AAFES.com and its associated vendors, the Star Card is accepted by Army lodging, Morale, Welfare and Recreation and military recreation sites in Europe

History: Introduced in 1999, the Star Card evolved from a deferred payment program for overseas military personnel first offered in 1979.