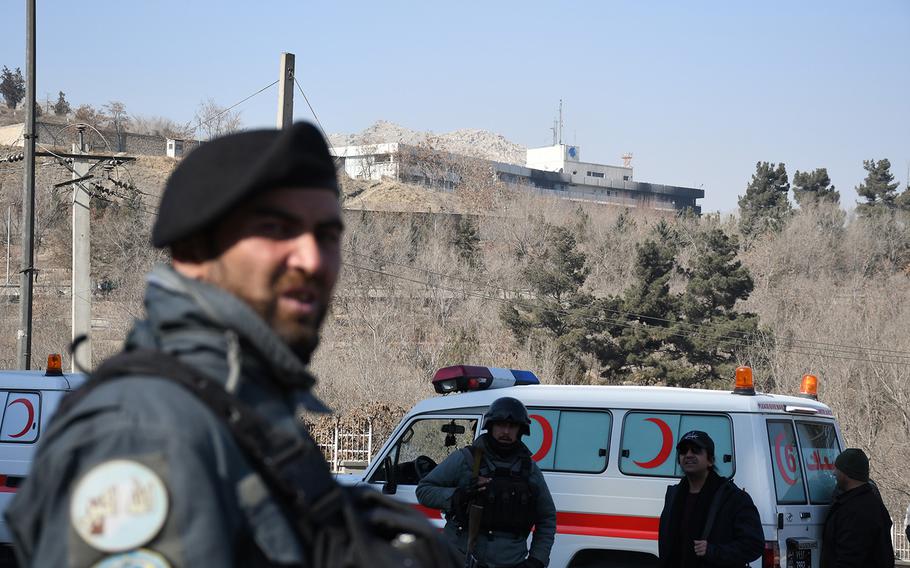 Buy Photo
An Afghan police officer stands guard on a road near the Intercontinental Hotel in Kabul, Afghanistan, on Sunday, Jan. 21, 2018. The road was closed to traffic as security forces fought to cleat the hotel of nearly a half-dozen Taliban attackers who had seized it the night before. (Chad Garland/Stars and Stripes)

Buy Photo
An Afghan police officer stands guard on a road near the Intercontinental Hotel in Kabul, Afghanistan, on Sunday, Jan. 21, 2018. The road was closed to traffic as security forces fought to cleat the hotel of nearly a half-dozen Taliban attackers who had seized it the night before. (Chad Garland/Stars and Stripes) 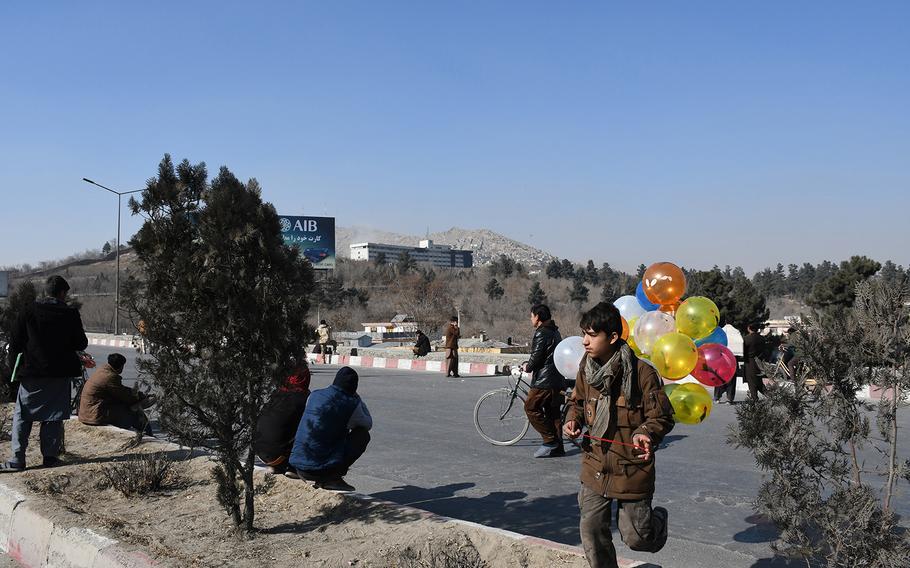 Buy Photo
A boy carried balloons across a road in front of the Intercontinental Hotel in Kabul, Afghanistan, on Sunday, Jan. 21, 2018, as security forces worked to clear the building of Taliban attackers. Blasts and gunfire could be heard Sunday morning, more than 15 hours into the attack. (Chad Garland/Stars and Stripes) 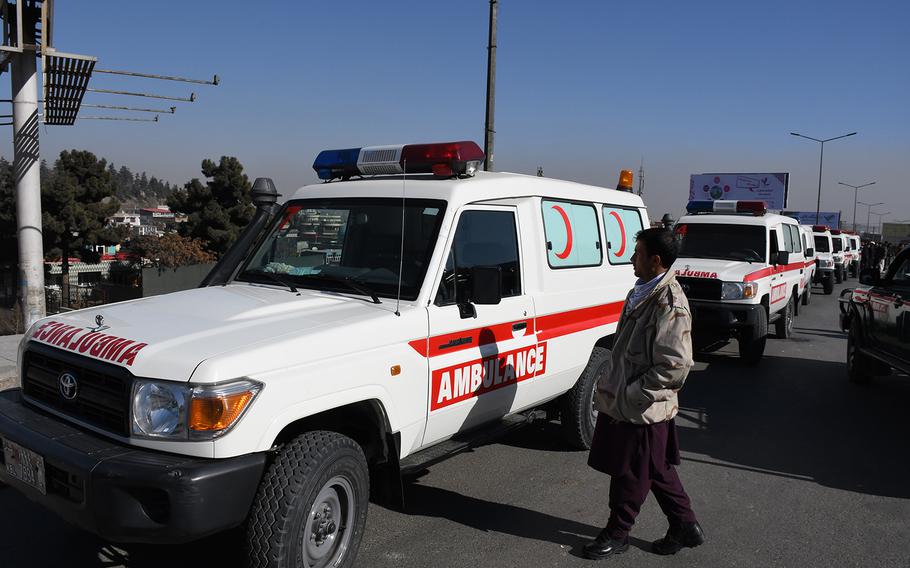 Buy Photo
Pictured here on a road outside the Intercontinental Hotel in Kabul, Afghanistan, on Sunday, Jan. 21, 2018, a row of ambulances waits to take casualties to local medical facilities as security forces continue working to clear the hotel of the Taliban gunmen who besieged it in an attack that began late the night before. (Chad Garland/Stars and Stripes) 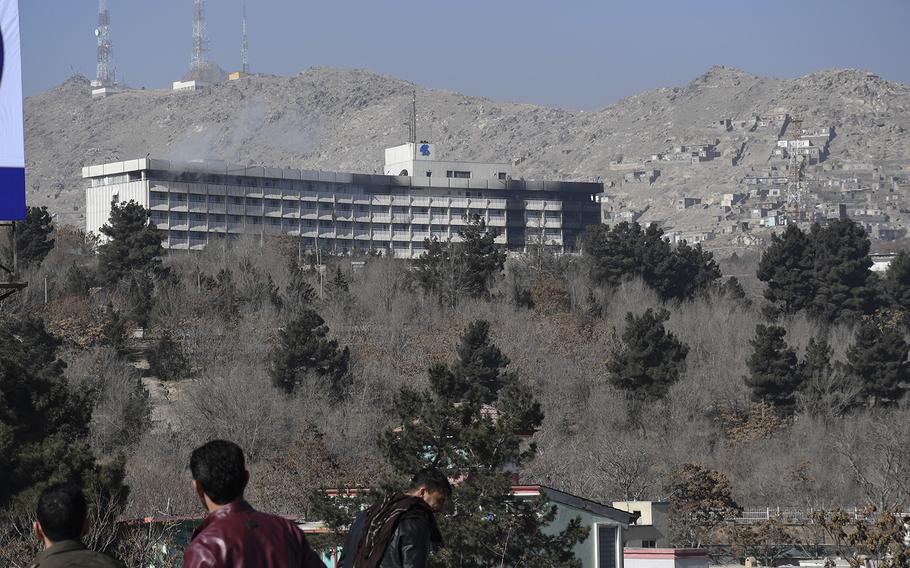 Buy Photo
Smoke billows out of the top floor of the Intercontinental Hotel in Kabul, Afghanistan, on Sunday, Jan. 21, 2018. Taliban gunmen stormed the hotel Saturday night, leading to a standoff with Afghan security forces that lasted into the afternoon Sunday, with gunfire and blasts echoing down from the hilltop luxury hotel to where crowds had gathered to watch the siege play out. Chad Garland/Stars and Stripes (Chad Garland/Stars and Stripes)

KABUL, Afghanistan — Afghanistan's Interior Ministry said at least four Afghans and 14 foreigners were killed in an attack at a popular luxury hotel in Kabul that ended Sunday, after about 16 hours.

The Taliban claimed responsibility for the attack, which began when gunmen stormed the Intercontinental Hotel at around 9 p.m. Saturday. The head of telecommunications for Farah province was among those killed, said Najib Danish, Interior Ministry spokesman.

Eleven of the 14 foreigners were employees of the private Afghan airline KamAir, Danish said. KamAir also put out an announcement saying some of their flights were disrupted because of the attack.

The exact number of deaths is not clear and may rise. Local outlets had reported more than 40 are believed dead.

Ukraine said six of its citizens were killed in the attack. Pavlo Klimkin, the Ukrainian Minister of Foreign Affairs, released that information Sunday in a statement to the Associated Press.

"I have informed the president of the death of six Ukrainian citizens as the result of the attack on the hotel in Kabul," Klimkin said.

At least ten others were wounded, including six security forces personnel. More than 150 people, including 41 foreigners, were evacuated from the hotel, Danish said. Local TV showed people trying to climb from the hotel windows and survivors told several outlets they hid under beds or in bathrooms until they could escape.

The Taliban said they targeted the hotel because the facility was hosting a gathering of Afghan and foreign officials. One of two major hotels in the city, the Intercontinental is a popular site for weddings, press conferences, official meetings and more.

At the time of the attack, officials from Afghanistan’s 34 provinces had gathered for a meeting organized by the country’s telecommunications ministry.

More than 13 hours later on Sunday morning, dozens of journalists and spectators had gathered to watch the siege play out. They lined a main road outside the hotel complex, which is situated on a hill in the Bagh-e-Bala neighborhood in the Afghan capital’s northwest, as sporadic and sometimes heavy gunfire and blasts echoed down from the hilltop.

One of the spectators, Rahmadullah Omarkhaid, 50, said the incident “tells you everything you need to know” about security in Afghanistan. He said he feared a worsening situation in his country, where there has been fighting for as long as he can remember.

Kabul security has been heightened as the city has hosted several important delegations in recent days, including a visit last week by representatives of the United Nations Security Council.

On Thursday, the U.S. Embassy here warned Americans to keep a low profile and be on alert after it received reports that militants may be planning attacks on hotels or other places where foreigners congregate.

The Taliban claimed responsibility for the attack Sunday afternoon, saying it had ended before noon. On the scene, however, gunshots and blasts continued into the noon hour and smoke occasionally billowed from the top floors of the building, which had been charred by flames.

Occasional snaps sounded as bullets struck nearby, and some Afghans and journalists ducked into wide gutters lining the road or stooped behind one of the eight civilian ambulances along the route, which had largely been closed to civilian traffic.

At one point, a police ambulance was seen speeding away from the scene as other trucks brought in food and fresh security forces.

It wasn’t until after 1 p.m., 16 hours after the attack began, that Afghan security forces waved the flag on the hotel’s rooftop, signaling the all-clear.

U.S. Ambassador John R. Bass in Kabul condemned the attacks and praised the government forces for their response to the violence.

An embassy spokesman said officials were aware of reports that an American had been trapped inside the hotel when it came under siege. They were in touch with Afghan officials, but had no further details about U.S. casualties.

U.S. military officials with the NATO mission in the country said Saturday there were no U.S. or coalition casualties in the attack.

The Intercontinental Hotel has witnessed decades of conflict in Kabul. It hosted Soviet invaders and western journalists and it suffered damage from rocket fire in Afghanistan’s civil war in the 1990s.

Saturday’s attack was the second major siege on the hotel since the U.S.-led invasion of Afghanistan in 2001. In 2011, seven Taliban fighters attacked the hotel, leading to a standoff with security forces that lasted five hours and left all the attackers, plus 11 others, dead.

In a statement, the Taliban said five of its members, armed with light and heavy weapons and strapped with suicide vests, had launched the attack. Officials have not said how the gunmen entered the complex, which is secured by several layers of checkpoints, metal detectors and bomb-sniffing dogs. Security duties at the hotel had reportedly been handed over to a private company less than three weeks ago.

Hawa Mohmand, 40, sat on the stoop of a business on the side of the road opposite the hotel.

“There is no security,” she said. “There is no peace. If there is security, how can they get into this hotel?”

Mohmand said her brother was trapped on the third floor of the Intercontinental, where he worked on the staff of the Pakistani consul, who resides in the building. She was distraught as she awaited news of his fate.

“We’re sad and terrorized by this incident,” she said.