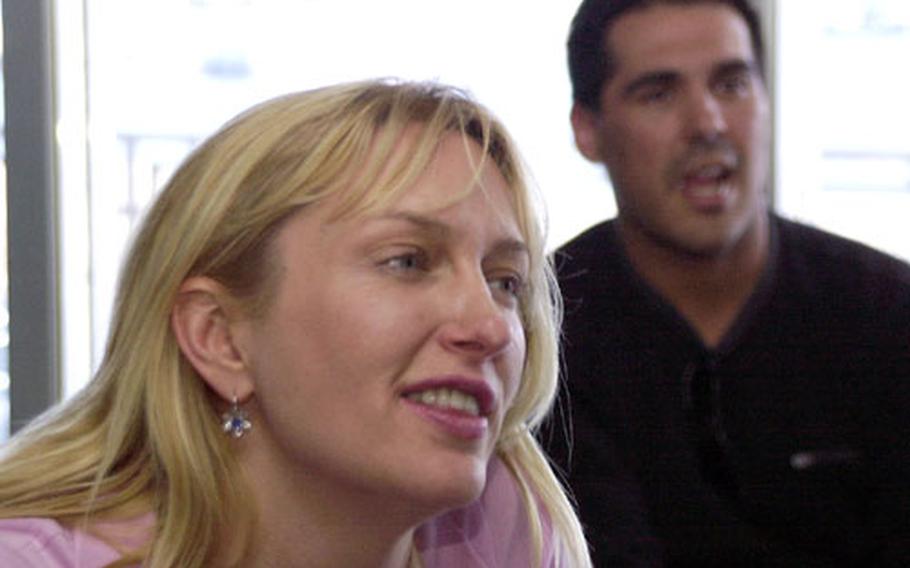 SASEBO NAVAL BASE, Japan &#8212; With most of Sasebo&#8217;s ships at sea, the audience numbered only 30 Tuesday evening as Jennifer Rawlings and Andres Fernandez prompted heavy bouts of chortles, snickers and belly roars at Sasebo&#8217;s Galaxies Club.

Nonetheless, in a world in which daily life is laced with anxiety and stress, uncertainty and even stark danger, &#8220;laughter is definitely one of the best medicines,&#8221; quipped Petty Officer 3rd Class Devin Wright, a serious fan of stand-up comedy.

Both Los Angeles-based comics, on an MWR tour to several U.S. bases in Japan, say a feeling of patriotism and gratitude to military personnel was a large part of their motivation for touring United States Navy bases in Japan.

Fernandez, a 38-year-old Cuban-American quipster, said, &#8220;These guys put their lives on the line a lot of the time. And it means a lot to them, and to me, for us to come here on these tours and attempt to create laughter.&#8221;

A native New Yorker, Fernandez said his comedy routines mainly draw on experiences in his own family, cultural differences among people, conflicts between genders and generations.

Fernandez, a father of two, said comics Bill Cosby and Richard Pryor influenced him most.

&#8220;My friend and I snuck into this theater when we were kids. I was expecting to see a movie but instead this one guy comes on stage, and just started talking about his life. It was Richard Pryor,&#8221; he recalled.

Rawlings credits female comics including Phyllis Diller and Joan Rivers for initially influencing her to pursue a stand-up comedy career. Among favorite male comics, she cited Dennis Miller for the &#8220;way he cracks his jokes.

Like Fernandez, Rawlings draws on personal experiences. &#8220;In my acts I talk a lot about growing up in Salina, and I talk about being married, which is such a give-and-take relationship. I mean, my husband puts up with my mood swings and in return, I don&#8217;t stab him in his sleep,&#8221; she joked.

Both also performed at Atsugi Naval Air Facility&#8217;s Club Trilogy on Wednesday and at Yokosuka Naval Base on Thursday and Friday.