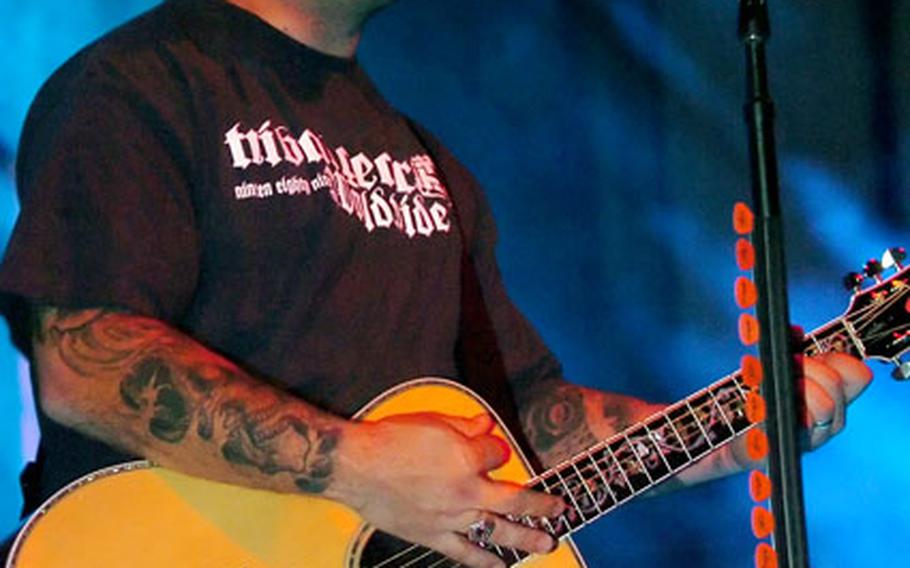 Lewis, lead singer for the metal band Staind, and his band mates have been more than happy to play a handful of shows for troops in Germany as they burn through Europe on a tour to support their new album, &#8220;Chapter V.&#8221;

&#8220;For a while now, I&#8217;ve been asking to do some of these shows,&#8221; said Lewis, 33, whose band rocked Baumholder, Germany, on Friday night, and before that performed at bases in Kitzingen and Mannheim while on a tour of Europe that continues through April. We&#8217;re doing what little we can do to let them know that we support them.&#8221;

The band&#8217;s album is more of the standard Staind sound, a blend of melancholy lyrics and melodious tunes. Softer, emotional songs sit next to tracks with a bit more of a heavy metal bite.

Lewis, who counts everyone from James Taylor to Pantera as his musical influences, said the band strives to avoid remaking previous records when they head back to the studio.

The band has been playing a set of Staind staples and new tracks for the troops in the past few weeks, Lewis said.

He said the band is comfortable playing anywhere.

Throughout the troop shows, Lewis said he has had soldiers tell him that they listened to Staind downrange.

While the troops are fighting in the name of democracy, Lewis said support for the troops should not wane, despite America&#8217;s political divide.

&#8220;An entire generation of kids who decided to volunteer themselves are doing this for us, and that is to be commended, not talked badly about,&#8221; he said.

Lewis also questioned the fickleness of an American public that fully supported the push into Iraq in 2003, but is now against the war.