Staff sergeants get an up-close look at Cambridge American Cemetery 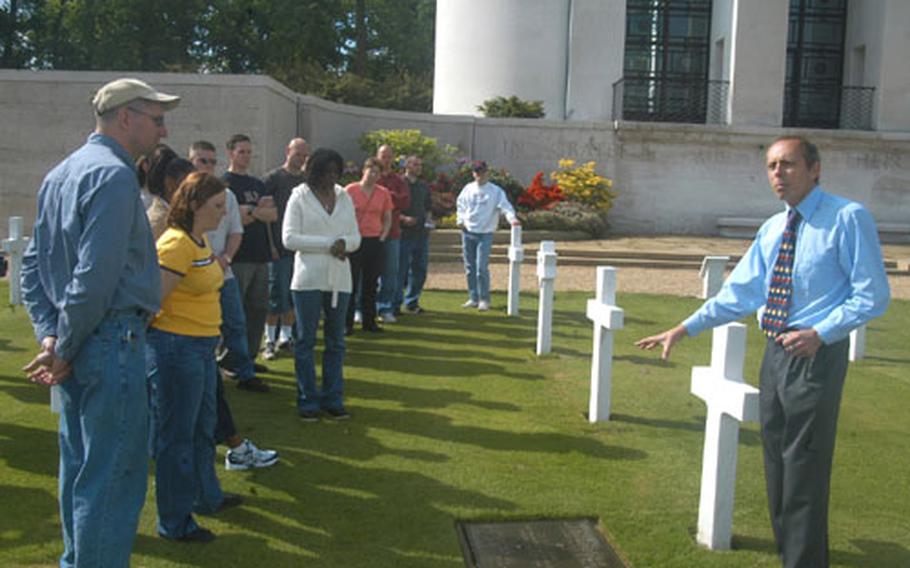 Arthur Brooks, right, a staff member at the American Military Cemetery at Madingley, England, explains the story of the cemetery Thursday to about 25 staff sergeants from the Professional Development Center at RAF Mildenhall, England. (Ron Jensen / S&S)

MADINGLEY, England &#8212; There is history around us that can be touched and seen and felt.

That was the lesson for staff sergeants from the Professional Development Center at RAF Mildenhall, when they left the classroom Thursday to get up close and personal with the history they have only read about.

He said the idea to take the airmen on the excursion came from Chief Master Sgt. Bill Scott, command chief master sergeant for the 100th Air Refueling Wing.

He said the field trip has been installed in all levels of training at the center. Young airmen go to the Imperial War Museum at Duxford, south of Cambridge. Senior noncommissioned officers and company grade officers have a trip to a tactical air center in their future.

For 24 staff sergeants last week, the chief&#8217;s idea took them to the Cambridge American Cemetery in Madingley, where more than 3,800 American dead from World War II are buried.

They also visited Thorpe Abbots, an airfield used by the 100th Bomb Group during World War II. The Bloody 100th is a direct ancestor of the 100th Air Refueling Wing at RAF Mildenhall.

&#8220;You can see where you came from, where your roots are and what came before you,&#8221; said Staff Sgt. Travis Good of the 100th Aircraft Maintenance Squadron at RAF Mildenhall.

Arthur Brooks of the cemetery staff took the airmen on a walking tour of the 13&#189;-acre cemetery.

Along the way, he pointed out several notables among the 5,127 names on the Wall of the Missing, including that of Joseph Kennedy, older brother of President Kennedy, and the odd moniker Alton G. Miller, who was band leader Glenn Miller.

He also showed them the chapel, the map of American World War II bases in the U.K. and the row upon row of marble crosses and Stars of David.

&#8220;There is no distinction in death,&#8221; Brooks said, noting that colonels receive no better marker than privates.

Most of Brooks&#8217; listeners were seeing the cemetery for the first time. And they were impressed with the manicured plants and the military precision of the grave stones.

&#8220;You read about these things in history, but being here and seeing the names and seeing the headstones makes it real,&#8221; said Staff Sgt. Linda Schulze of the 100th Services Squadron.

Scott said the idea is working. Some of the staff sergeants who were on last week&#8217;s trip took their families back to Thorpe Abbots and the cemetery over the weekend, showing them what they had seen. Staff Sgt. Tana Chevalier of the 100th Communications Squadron said the cemetery visit made her reflect on the history that she has now joined.

And looking out at the crosses and Stars of David, she wiped away a tear.