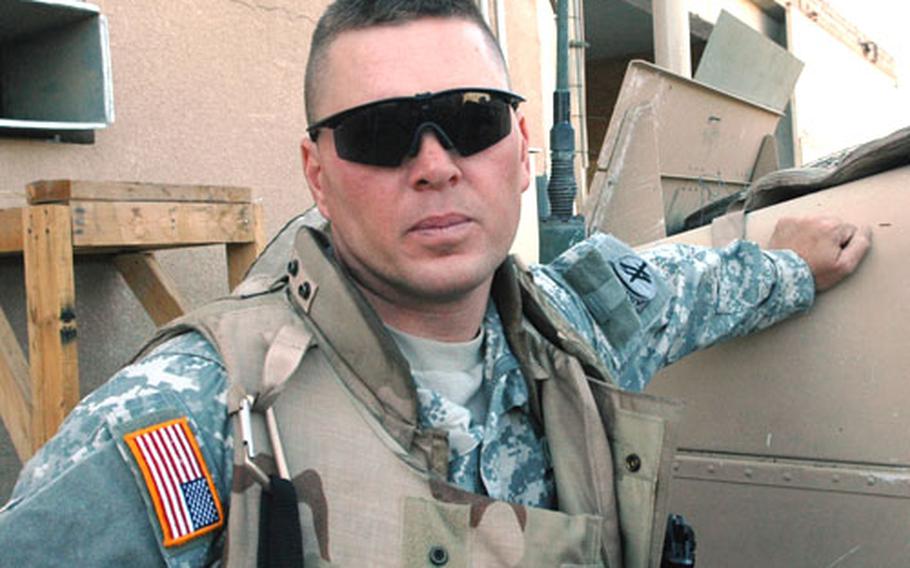 (Editor&#39;s note: Staff Sgt. Jason Brown, the subject of this story, has been wounded by sniper fire in Iraq, the Associated Press reported on Friday. See sidebar for more details.)

Staff Sgt. Jason Brown, however, just wants to make it through his year in Baghdad.

The 36-year-old reservist from Platte City, Mo., could be the consummate public servant: During the day, he mans a Humvee gun turret in east Baghdad as a member of the Utica, N.Y.-based 414th Civil Affairs Battalion.

At night, after his soldierly duties are done, he spends up to eight hours on the computer, doing research and answering requests from constituents in his legislative district, which he hopes to hold on to in November&#8217;s election.

Brown, a Republican, first took office in 2002, after spending years working in municipal government as a public works director. He was called to active duty last year, during the Missouri legislative session.

This year, he&#8217;s running a remote re-election campaign on an anti-tax platform &#8212; an interesting choice considering his day job these days is funded by taxpayers (he also receives a publicly funded salary as a state representative, and he owns and runs two private construction companies).

Because of military and practical restrictions, his wife is continuing his campaign at home, conducting fundraising events and making public appearances.

He acknowledged that his double life keeps him very busy. But, he said, he&#8217;s found some hidden rewards.

He said his experience in Iraq will have a great and positive impact on his work as a legislator.

He said his experience in Iraq has led him to push for greater awareness of veterans&#8217; benefits and has fortified his determination to continue supporting the war.

He laughed when asked if he planned to visit Iraq in the future, as part of a legislative junket.

By The Associated Press

PARKVILLE, Mo. &#8212; A Missouri state lawmaker stationed in Iraq was shot in the lung by a sniper while on patrol, a family spokesman said Friday.

Rep. Jason Brown, 36, was resting at an Iraqi hospital and waiting to be taken to a military facility for surgery, said George McClintock, a family spokesman and former Veterans of Foreign Wars post commander. He was wounded while serving near Baghdad, McClintock said.

Brown, a staff sergeant in the Army Reserve, was deployed in March for a one-year tour and has been serving as a civil affairs specialist, helping build roads, bridges, hospitals and schools. In 2000, he served in Bosnia-Herzegovina.

Brown, a Platte City Republican, is up for re-election next month. He was first elected in 2002 to represent a state House district just north of Kansas City.