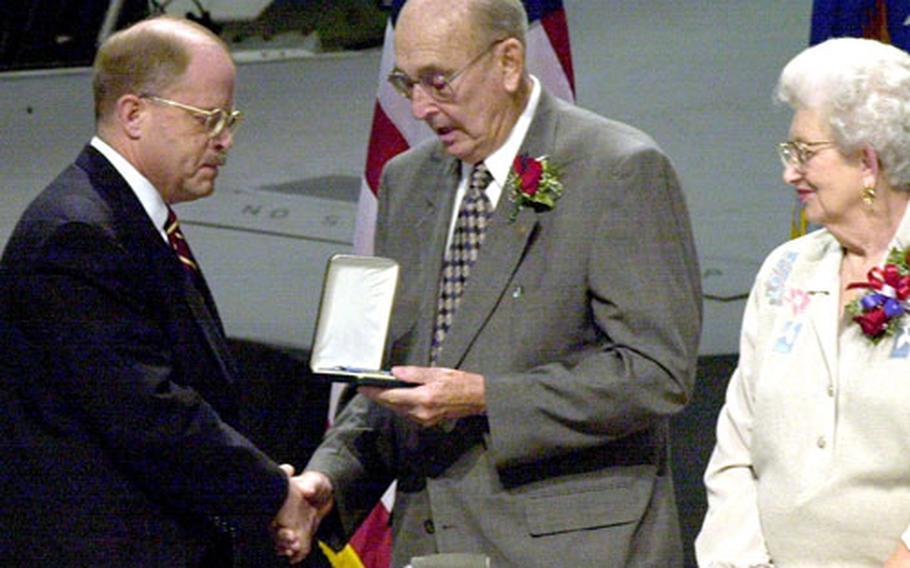 William F. Pitsenbarger, center, accepts the Medal of Honor on his son&#39;s behalf from Secretary of the Air Force Whit Peters, during a ceremony at Wright-Patterson Air Force Base, Ohio. At right is Pitsenbarger&#39;s wife, Alice. (Courtesy of the U.S. Air Force)

KADENA AIR BASE, Okinawa &#8212; Kadena Air Base&#8217;s Medal of Honor memorial was rededicated Tuesday with the addition of a Vietnam War Medal of Honor recipient.

Forty years after he was killed tending to infantrymen pinned down by enemy fire in a battle near Cam My, a few miles east of Saigon, Staff Sgt. William H. Pitsenbarger&#8217;s name was added to the memorial in a ceremony organized by Kadena&#8217;s chapters of the Air Force Sergeants Association and the Airlift Tanker Association. He is the sixth enlisted airman to receive the Medal of Honor.

Pitsenbarger, an airman 1st class at the time, originally was awarded the Air Force Cross in 1966. The decoration was upgraded to the Medal of Honor in 2001 and he was posthumously promoted to staff sergeant.

&#8220;It was very fitting [and] long overdue for Pitsenbarger to get upgraded to the Medal of the Honor,&#8221; Staff Sgt. Jeffrey Hedglin, a pararescueman with Kadena&#8217;s 31st Rescue Squadron, said at the ceremony, according to an 18th Wing news release. &#8220;It was something that my career field had been waiting for and hoping for.&#8221;

There are 59 names of U.S. Army Air Corps and U.S. Air Force Medal of Honor recipients on the base&#8217;s memorial. During Tuesday&#8217;s ceremony, 18th Wing commander, Brig. Gen. Harold W. &#8220;Punch&#8221; Moulton, said Pitsenbarger was &#8220;a hero who, like many others, gave the ultimate sacrifice in service to the United States and its allies, securing peace and stability in the world,&#8221; according to the news release.

On Easter Sunday 1966, Pitsenbarger crewed one of two HH-43F Kaman Huskie helicopters to extract a half-dozen or more Army casualties pinned down in an ambush. According to the official Air Force history of the event, once the helicopter reached the ambush site, Pitsenbarger was lowered through the trees to the ground, where he attended to the wounded and had them lifted to the hovering helicopter by cable.

After six wounded men had been flown to an aid station, the Air Force helicopters returned for their second load, but they were met by enemy small-arms fire and had to leave. Pitsenbarger decided to remain on the ground with the 20 remaining infantrymen, tending to their wounds, gathering weapons and ammunition for the infantrymen fighting off the enemy and, at the end, joining in with a rifle to hold off the Viet Cong.

The next morning, Pitsenbarger&#8217;s body was retrieved along with those of 11 other dead Americans. He had been shot four times. Nine of the infantrymen survived.

At the ceremony, Steve Wright, deputy Aerial Port Operations officer for the 733rd Air Mobility Squadron and one of the event organizers, said Pitsenbarger was found &#8220;with an M-16 rifle in one hand and his medical kit in the other,&#8221; according to the release.

The Defense Department also honored Pitsenbarger in 2001 by naming a prepositioned ammunition ship, the MV A1C William H. Pitsenbarger, after him. The ship prepositions Air Force ammunition near potential war or contingency sites.