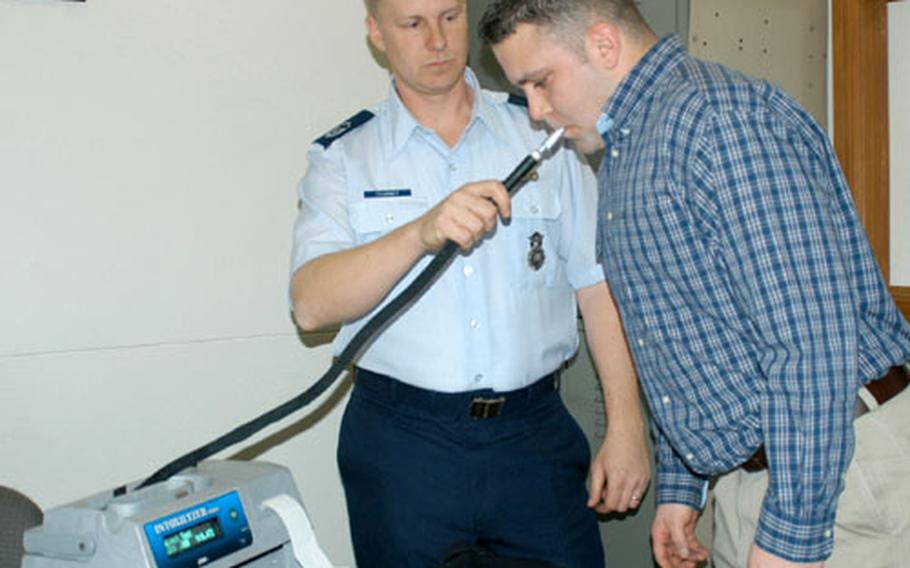 YOKOTA AIR BASE, Japan &#8212; Staff Sgt. Jason Pringle spent Wednesday afternoon doing something he normally doesn&#8217;t do at work. He got drunk.

The 374th Security Forces Squadron member pounded a six-pack of beer in about an hour to help demonstrate the newest weapon in Yokota&#8217;s arsenal against drunken driving: the Intoxilyzer 8000.

Col. Mark Schissler, 374th Airlift Wing Commander, said Wednesday he used his own &#8220;commander&#8217;s focus funds&#8221; to purchase the state-of-the-art alcohol detection equipment when he realized the older version wasn&#8217;t working as well as it should and the Security Forces lacked the budget to buy the $8,000 machine.

Schissler said he is absolutely convinced the purchase is &#8220;good for the safety of the community.&#8221;

As Pringle downed the last of the beer, Master Sgt. Timothy Fearney, Security Forces plans and programs, explained the features of the portable Intoxilyzer and the two hand-held Lifeloc FC20 alcohol-detection units also purchased. Yokota received the handheld units almost a month ago; the Intoxilyzer has been in use since Saturday.

All three pieces of equipment give you &#8220;the freedom of being mobile,&#8221; Fearney said. He said the handheld units passively detect alcohol in the air, even without someone blowing into the machine.

During the demonstration, Security Forces Airman 1st Class Michael Skonetski walked Pringle through an initial check with the handheld unit during a simulated traffic stop. From there, Pringle failed a field sobriety test after stumbling while walking a straight line and missing &#8220;26&#8221; when counting to 30 while balancing on one foot. When Pringle faced the Intoxilyzer, a quick readout confirmed he would have been in big trouble had he really been driving.