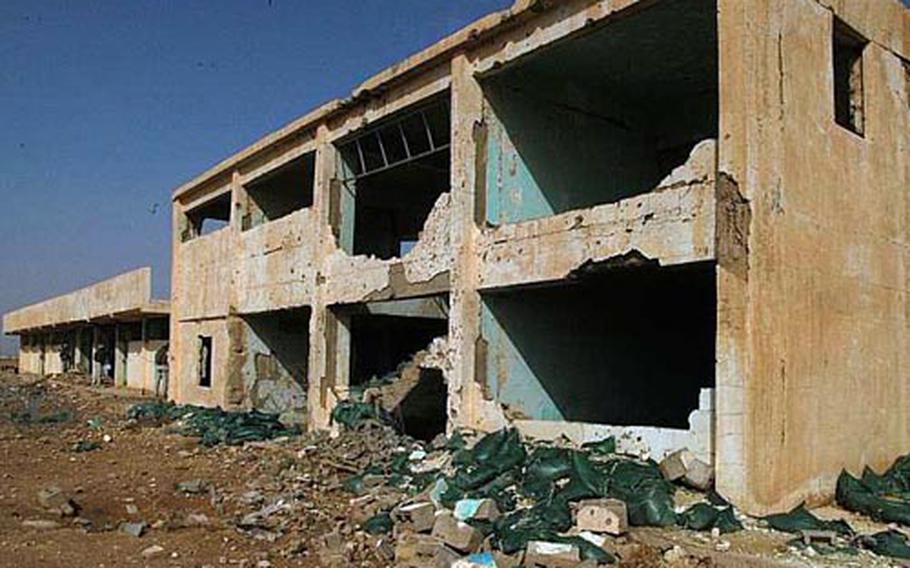 Haditha&#39;s soccer stadium is in a state of disrepair. (Jimmy Norris / S&S)

Haditha&#39;s soccer stadium is in a state of disrepair. (Jimmy Norris / S&S) 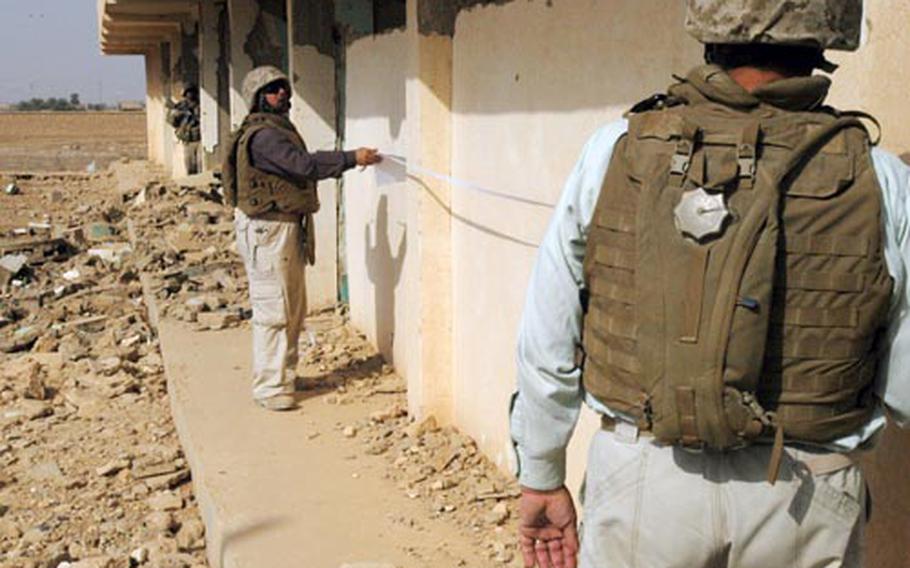 Discarded concertina wire and sandbags litter the ground alongside spent .50-caliber and 7.62-millimeter casings. The parts of the grandstand not reduced to rubble are pockmarked with the impact craters from small-arms fire. Stray animals have taken up residence in what used to be the restrooms.

Walls along the field&#8217;s perimeter are scrawled with slogans from the time of the Baath Party regime saying, "Long live Saddam." Later writings left during al-Qaida&#8217;s tenure in the city say, "The Americans failed."

"We&#8217;ll need to paint over that," said Jalal Qaradaghi, an embedded provincial reconstruction team engineer working out of Combat Operating Post Haditha. "Maybe with flowers or Olympic symbols &#8212; something to match the soccer field."

Harder to paint over are painful memories of the stadium. In 2006, during some of the heaviest fighting of the insurgency, members of al-Qaida forced Haditha citizens to watch from the stands as they shot and beheaded 80 residents for offenses ranging from breaking Islamic law to being police officers.

The slaughter was the last straw in a string of incidents that caused residents to turn away from the insurgency and lend their support to coalition forces, according to 2nd Lt. Chris Parks, I Company, 3rd Battalion, 7th Marine Regiment.

But Haditha, which is in Anbar province, is also notorious for the day when Marines allegedly killed 24 civilians, including women and children, hours after a bomb blast took the life of a fellow Marine and wounded two others.

A former commanding general and two other senior Marines were censured for failing to properly investigate and report the Nov. 19 incident, though trials of others Marines involved have resulted in acquittals.

As disturbing as the killings were, residents are more upset about the deaths at the hands of al-Qaida.

Haditha resident Sheik Daham Hussein al-Jugayf said it&#8217;s because the incidents were "totally different." He said the 2004 incident was during the fighting and at an emotional time. The soccer field incident, on the other hand, was an organized mass execution.

Daham said the people of Haditha have learned to appreciate the difference between Marines and al-Qaida.

"When Marines pass you in the street they say &#8216;Salaam&#8217; and keep going," he said. "When al-Qaida passes you, they handcuff you, lock you in the trunk of an Opel car and behead you at the bridge."

The PRT plans to renovate the soccer field over the next six months and make it once again fit for play, said John Bauer, liaison for the team.

Bauer said the renovation is still in its early planning stages, with grant proposals yet to be written, but he estimates the project will create about 30 temporary jobs in a city desperate for employment.

Qaradaghi said the renovation, requested by city officials, will give new life to one of the only places where children can go for after-school activities. He said that in addition to soccer, the stadium will be marked for a number of track and field events.

Officials said they don&#8217;t believe the stadium&#8217;s status as the site of a massacre would keep people from wanting to use it.