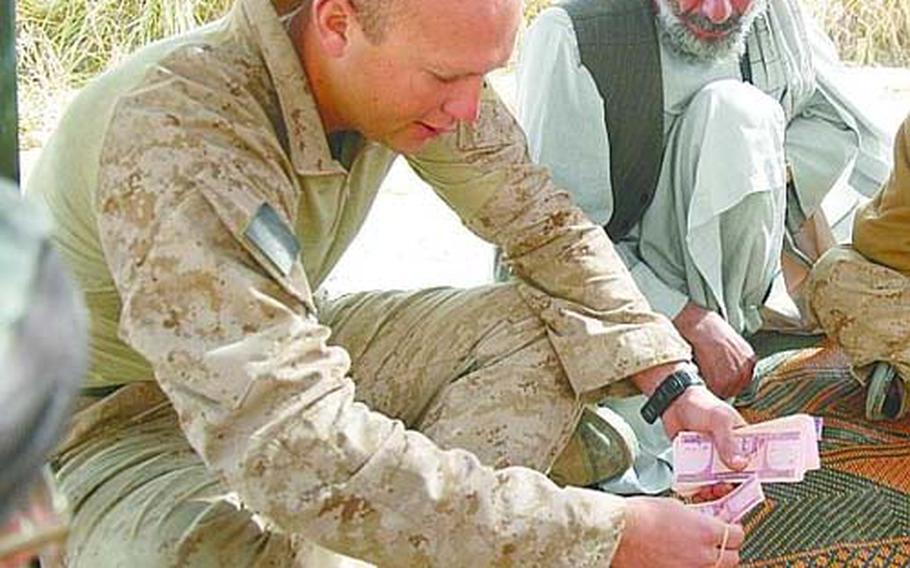 Capt. Steve Karabin, commander of 1st Battalion, 3rd Marine Regiment’s Company C, counts out Afghan dollars for a project to refurbish a health clinic in Nawa. As security improves, civil and military forces in Nawa are increasingly focused on community projects. But in Helmand province’s rural towns, the ability of the Afghans to properly staff health clinics, schools and other important institutions remains a challenge. (John Vandiver / S&S)

Capt. Steve Karabin, commander of 1st Battalion, 3rd Marine Regiment’s Company C, counts out Afghan dollars for a project to refurbish a health clinic in Nawa. As security improves, civil and military forces in Nawa are increasingly focused on community projects. But in Helmand province’s rural towns, the ability of the Afghans to properly staff health clinics, schools and other important institutions remains a challenge. (John Vandiver / S&S) 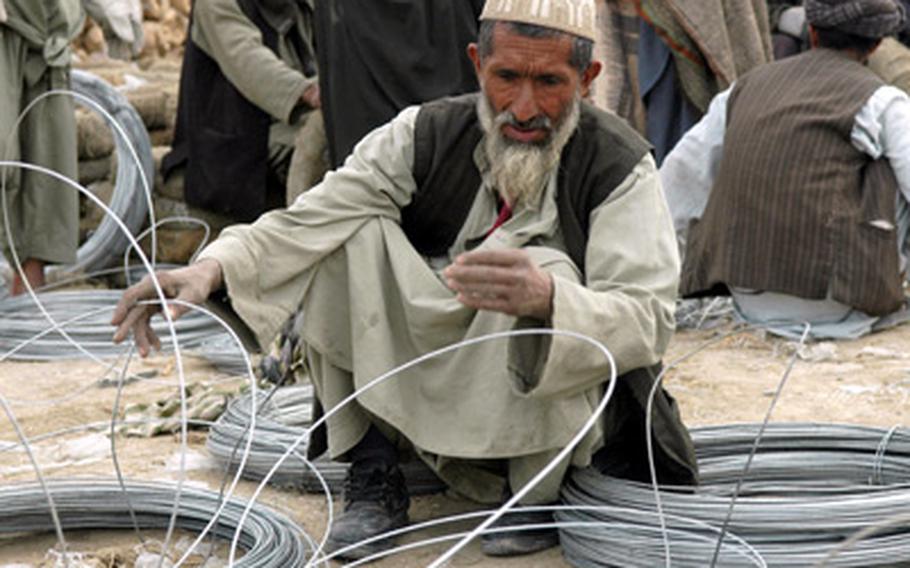 A local worker in Nawa bends wires into cylinders, which will be used as farming tunnels. (John Vandiver / S&S)

NAWA, Afghanistan &#8212; This is where the big shots come: members of Congress and the Cabinet, the Joint Chiefs of Staff and Afghan President Hamid Karzai himself. Nawa is the destination for a little counterinsurgency show and tell.

This rural agricultural town of about 90,000 is being held up as a showcase of what is possible in treacherous Helmand province, where additional forces are headed as part of President Barack Obama&#8217;s troop surge.

Since the Marines arrived here in June, much of Nawa has been cleared of enemy fighters, according to military and civilian officials who work here. The district bazaar, now a bustling marketplace of more than 100 shops, featured just six before the Marines arrived. During a recent whirlwind stop, Adm. Mike Mullen, the chairman of the Joint Chiefs of Staff, toured Nawa&#8217;s market Kevlar-free.

But not everything is quite what it appears in Nawa, and danger still lurks around every corner. Marines continue to be killed by roadside bombs on Nawa&#8217;s dirt roads. Local district council members still can&#8217;t move freely around the district for fear of assassination. Two officials were killed in November by insurgents, and the district governor has taken up residence in a compound alongside a Marine patrol base.

And there are even more vexing long-term concerns. The economic recovery phase of the mission &#8212; a linchpin to lasting stability &#8212; could prove to be the hardest part, according to those involved in the redevelopment efforts. Success is far from guaranteed.

"We have to be acutely aware that, despite the incredible amount of effort and resources we are putting in, ... there is the potential that we will not succeed in the way we hope," said Scott Dempsey, U.S. Agency for International Development field program officer in the district.

Millions of dollars are being pumped into public works projects, including a town hall for conducting political business and a new police station. And there are the numerous agricultural projects spearheaded by USAID and nongovernmental agencies, which aim to bring economic stability to an area where the Taliban have long dictated what farmers must grow.

But it remains to be seen whether something sustainable can be built in a place where people, with good reason, are suspicious of their own government&#8217;s ability to provide essential services.

"It is the singular biggest challenge," Purves said. "The Marines can facilitate the building of structures. We can try and promote teachers and medical staff to come down here. But you see what&#8217;s happened when for 30 years there&#8217;s been no reinvestment in a civil service. Now, we are starting largely from scratch."

Such conditions make the transition from a poppy-growing region to alternative crops all the more challenging.

Without roads to deliver merchandise in a timely manner, security to ensure that those routes can be navigated, and international trade deals in place, there is little incentive for the average grower to risk venturing into new fields.

Poppy, by comparison, is easy to transport and the crop is guaranteed to bring in a good price.

Opium has been the major industry in Helmand in recent years, generating revenue for farmers often under Taliban orders to grow the crop. The insurgents impose a tax on growers to help finance the insurgency.

But as security has improved, development workers here say farmers are starting to show a willingness to break from the drug crop. In 2009, for instance, wheat grain seeds were delivered to 6,000 farmers in Nawa. And because of a glut of poppy on the market, wheat farmers fared well and were able to compete.

Opium cultivation in Afghanistan decreased by 22 percent in 2008, according to a 2009 narcotics survey by the U.N. Office on Drugs and Crime. In Helmand province, cultivation declined by a third, attributable to "an effective mix of sticks and carrots: governor leadership; a more aggressive counternarcotics offensive; terms of trade more favorable to legal crops," the report stated.

Abdul Manaf, the district governor, says he is optimistic that Nawa can make the transition to crops such as wheat, vegetables and hanging fruits.

"Everybody agreed to stop growing poppy except for a few farmers. We&#8217;re working on this," Manaf said. "The important thing now is to open up the markets for these other crops. That&#8217;s really what we need."

On a recent day at the Nawa district center, agricultural programs were in full swing. Some 250 workers were hired to construct plastic crop tunnels that function like a greenhouse. About 4,000 farmers have signed up to receive the tunnels along with seed to plant alternative crops.

The tunnels, used to grow everything from spinach and eggplant to carrots and radishes, are a low-tech way to raise crops more quickly and get an edge on the competition.

Aid workers caution that it&#8217;s very uncertain that these gains are long term.

"But the success we&#8217;ve had thus far leads us to believe there is a way forward and the potential to succeed," said Dempsey, the USAID field program officer. "It will require a lot of time and patience, which are things we don&#8217;t have a lot of."