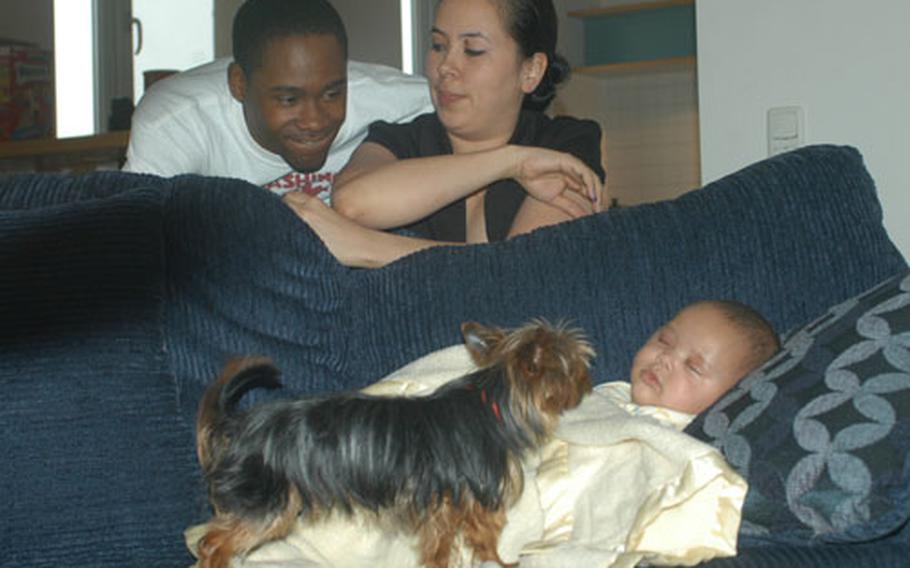 HEIDELBERG, Germany &#8212; She&#8217;s married now, with a baby boy, an apartment in Mannheim, a secretarial job, even a little dog named Max. She not only loves her husband, she thinks of him as her hero. Literally.

Just a little more than a year ago, she was Spc. Jamie Kaskowitz, living at Tompkins Barracks, with a new roommate and just months to go before her enlistment was up and she was out of the Army.

Then Lesesne was on Kaskowitz, slashing at her head and shoulder.

Her boyfriend, Spc. Larry Thomas, who was visiting Kaskowitz, followed her into the room. He couldn&#8217;t believe what he was seeing, either.

Thomas wrestled the knife from Lesesne&#8217;s hand and slammed his head against the wall. He punched him so hard, the bone on the outside of Thomas&#8217; hand snapped in two.

Lesesne broke free and ran off; Thomas tended to his girlfriend and did what little he could for Gamboa, who died of her wounds &#8212; she&#8217;d been stabbed 23 times &#8212; before the ambulance finally arrived.

Kaskowitz had been stabbed five times. And in those terrible seconds, and in the difficult months that followed, she decided that she could not do without Thomas ever again.

Now known as Mrs. Jamie Thomas, the 25-year-old new mother wants her husband to be awarded the Soldier&#8217;s Medal.

The couple would never have met, except through the Army. She was born in Nome, Alaska, grew up in Orange County, Calif., and said she joined the Army on a whim when a recruiter popped up on Sunset Boulevard.

Larry Thomas is from a small Texas town near Galveston and enlisted because he didn&#8217;t get the sports scholarship he needed to attend college.

He was smitten with her immediately, he said, but she declined to date him until both returned from yearlong deployments, and she saw in him what he had seen in her.

Still, she was planning on leaving in May. Lesesne&#8217;s court-martial and Kaskowitz&#8217;s sudden bond with the man who saved her, followed by her pregnancy, kept her in Germany instead. They married the June day that Lesesne was sentenced to no more than 99 years in prison.

The couple&#8217;s son, Kaymon Thomas, was born in November at Heidelberg Hospital, where his mother had recovered from the stabbing.

First Personnel Command leaders helped her, she said. They made sure she saw a counselor to understand what she was going through. When she had a panic attack, her sergeant had soldiers there for her within minutes. Another sergeant cleaned the crime scene all alone, she said, refusing to have his soldiers go through that.

In a way, it was worse for Larry Thomas. His former artillery unit, since disbanded, responded as though nothing had happened. But Thomas was in distress.

Five months ago, he was demoted to private second class after a urinalysis showed he&#8217;d smoked marijuana &#8212; to help him deal with recurrent, awful thoughts of that morning, he said.

Larry Thomas is less invested in getting the medal &#8212; awarded for noncombat heroism involving personal danger and voluntary risk of life &#8212; than is his wife. He doesn&#8217;t ask about her efforts, said he doesn&#8217;t really feel like a hero.

His wife said she&#8217;s recently gotten a packet together and has assurances from a variety of officials who have indicated they&#8217;ll support the effort as it goes to the Department of the Army.