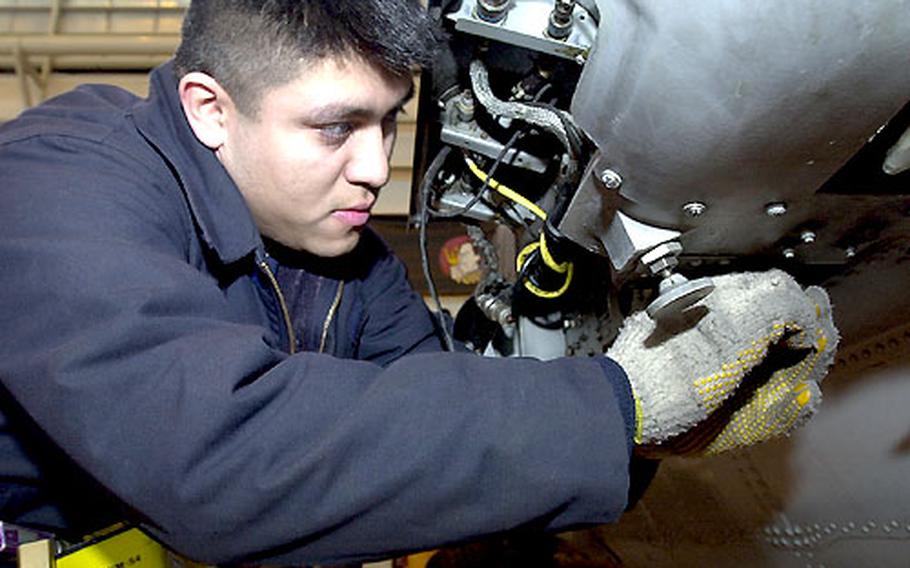 Petty Officer 3rd Class Jason Douglas checks over the list of instructions the team has to go through to properly load the torpedo. Douglas is the team leader for the exercise. (Rick Chernitzer / S&S) Inside a roped-off area in Helicopter Anti-submarine Squadron (Light) 51&#8217;s hangar here, team leader Jason Douglas reads a list of step-by-step instructions, shouting out directions to a group of fellow sailors from the squadron&#8217;s Detachment Five. The center of attention: a brightly painted torpedo on a yellow towing device.

And the sailors working meticulously on the torpedo typically don&#8217;t handle things that go boom. They&#8217;re avionics technicians, search-and-rescue crewmen, airframe technicians and other ratings who work around torpedoes, but not with them.

Douglas checks off steps on his sheet with a China marker as the group completes them. As his finger slides down the list of directions, he comes across a warning. In a steady, confident tone, almost as if he were barking marching orders to a group of cadets, he shouts:

The Conventional Weapons Training Proficiency Inspection, conducted every two years, examines how well teams adhere to the volumes of checklists and training manuals for every minute procedure involved with arming a helicopter. It ensures that those who don&#8217;t normally handle torpedoes are up to speed with procedures they may have to employ in a real situation.

They don&#8217;t normally read these instructions and cautions out loud while loading actual ordnance in one of those real situations, explains Chief Petty Officer Michael Hall, HSL-51&#8217;s weapons officer.

Hall says it is extremely important that sailors in other rates know how to handle torpedoes and weapons systems. Torpedoes normally are handled by aviation ordnancemen, known in the Navy as &#8220;AOs.&#8221;

He reviews a few small details that could be fine-tuned.

&#8220;We approached the inspection coming out of a holiday period. Even with all the things we had going, they did pretty good,&#8221; he said.

Petty Officer 2nd Class William Smouse, who normally functions as a search-and-rescue crewman, said the old training comes back during the exercise &#8212; which is the point.

The inspection comes on the heels of other checks and inspections, Smouse said.