Squadron practices for wartime at air base 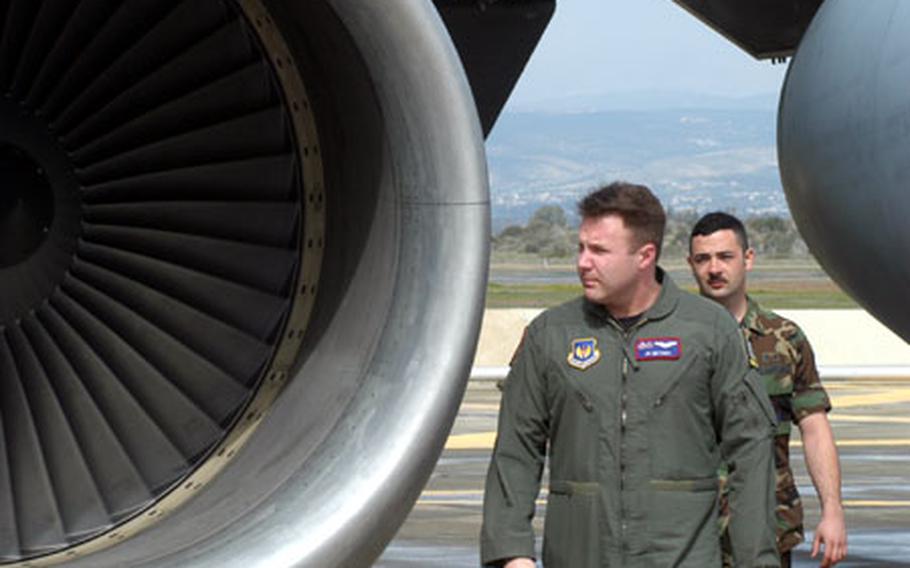 Capt. J.B. Meyers, a pilot, foreground, examines his KC-135 Stratotanker before making a flight Monday for an air base in the Mediterranean region. Accompanying him is Staff Sgt. James Rice, with the 401st Expeditionary Aircraft Maintenance Squadron. (Ron Jensen / S&S)

Capt. J.B. Meyers, a pilot, foreground, examines his KC-135 Stratotanker before making a flight Monday for an air base in the Mediterranean region. Accompanying him is Staff Sgt. James Rice, with the 401st Expeditionary Aircraft Maintenance Squadron. (Ron Jensen / S&S) 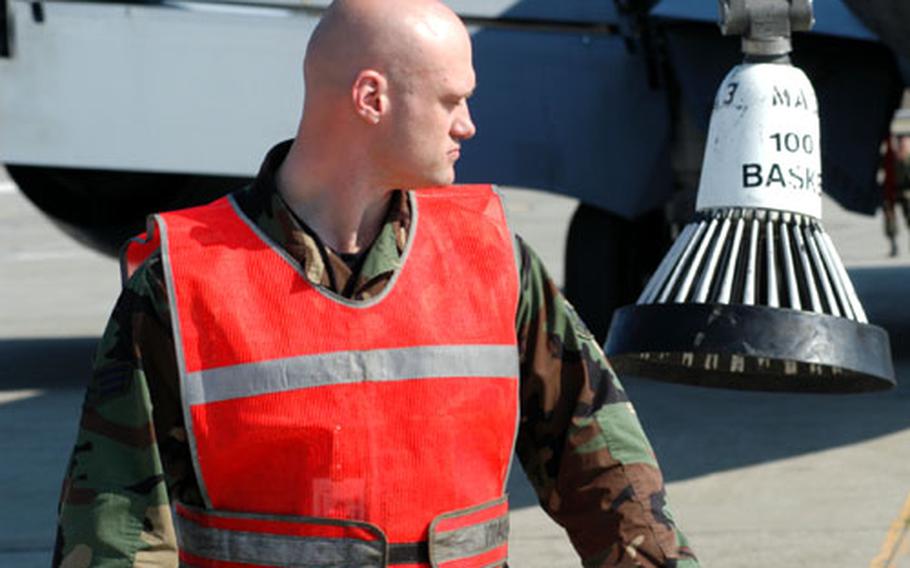 Senior Airman Kennon Colvin of the 401st Expeditionary Aircraft Maintenance Squadron walks ahead of a KC-135 Stratotanker at an air base in the Mediterranean region. The jets must be pushed back to their parking spaces because of a small ramp at the location. (Ron Jensen / S&S)

AN AIR BASE IN THE MEDITERRANEAN REGION &#8212; Practice makes perfect.

That&#8217;s the hope of the 401st Expeditionary Aircraft Maintenance Squadron.

Now, while the pace is relatively slow, the maintainers at this base are preparing themselves for what might be a much more hectic time if the military buildup results in war with Iraq.

Since ramp space at this base is tighter than prom shoes, the KC-135 Stratotankers that have been sent here must be pushed back into their parking spots. For that, they are attached to aircraft tugs, tractor-like vehicles that maneuver them backward to clear space for more aircraft. It can be time-consuming if not done properly.

It&#8217;s not done regularly at RAF Mildenhall, England, where the maintainers normally live and work. So, even when there is no need to hurry, the maintainers rush just like they will when the shooting starts.

And there are times when the pace can get positively war-like, which it did Saturday morning.

More than 200 members of the 100th Air Refueling Wing from RAF Mildenhall have deployed to this base, along with several aircraft. They have joined the 401st Air Expeditionary Wing, which will soon number 1,000 people from across the Air Force to support the war on terrorism.

Because of political sensitivities in the host nation, the base location cannot be revealed.

Deployments are not easy, especially when all the bits and bobs needed to keep aircraft flying must be brought along.

The deployment benefited from a site survey and a measured movement of the people and aircraft. But there are things that slip through the cracks.

But, he said, a phone call home has ensured any missing tool or spare part was put on the next airplane bound for this base.

Any deployment has challenges, and this one is no exception. For one thing, there is no hangar for the aircraft, so maintenance is performed in the open.

The maintainers overcame one challenge when a valve repair couldn&#8217;t be done with the equipment available to them. They asked the Navy for help.

A Navy unit at the base ferrying mail and cargo to carriers in the Mediterranean Sea transported the broken valve to a carrier, where maintainers there fixed it.

He said that idea came from noncommissioned officers who share a dining facility with their Navy brethren. &#8220;That&#8217;s where the knowledge is,&#8221; he said of the enlisted troops.

Lorraine said many of the enlisted personnel are on their first deployment, and they have been paired up with people who&#8217;ve been gone before to assist them.

Nath is one of those experienced people. He&#8217;s on his seventh deployment.

Rivalries between crew chiefs, for example, slip away in the desire to do the job, he said.

Nath said the maintainers still do their job, despite having fewer people, unfamiliar surroundings and a possible war looming.