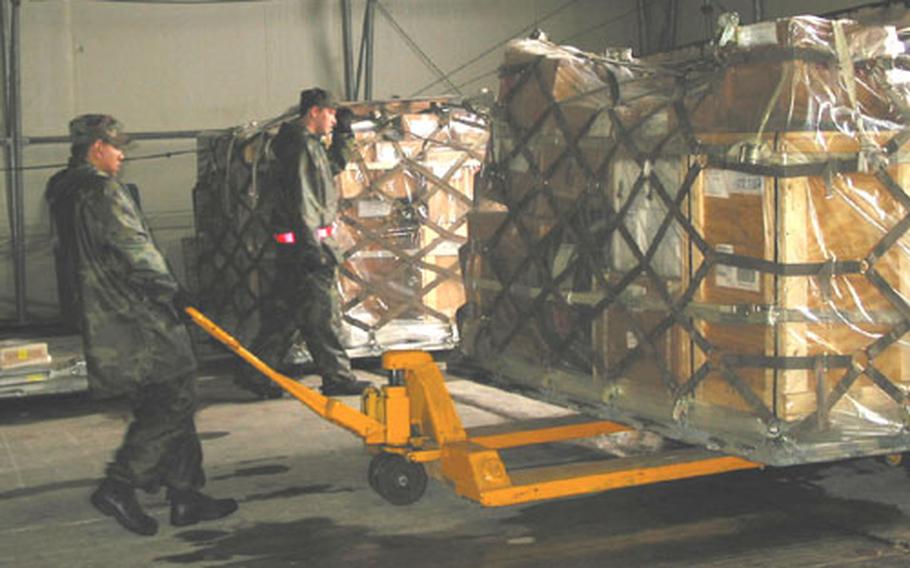 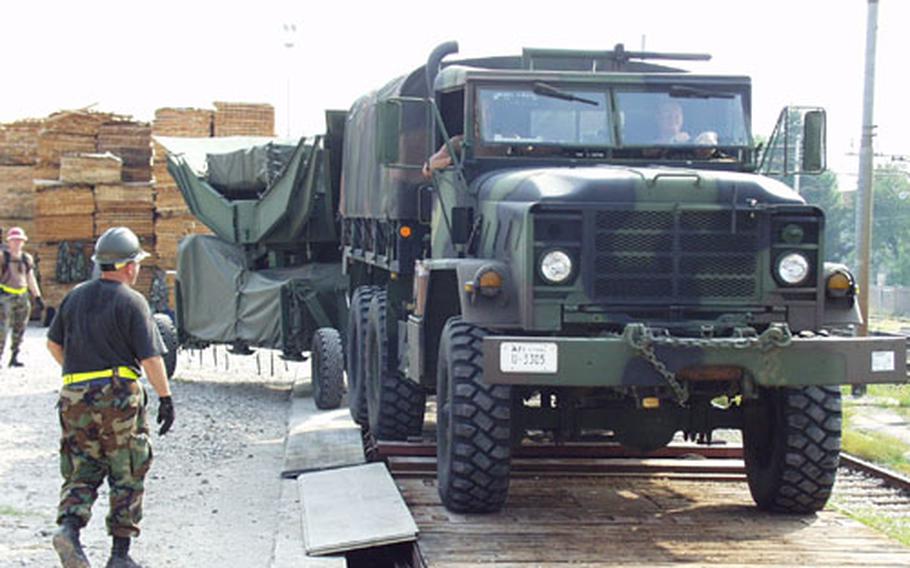 Airmen load one of two dozen trucks onto rail cars Thursday morning as the 603rd Air Control Squadron sends its equipment to Poland. It took the squadron two days to load up the trucks and another day to get the trucks on the trains. (Kent Harris / S&S)

The challenge: Getting tons and tons of equipment from Aviano Air Base, Italy, to an air base in Poland.

The solution: Several days of packing and heavy lifting, a trainload of trucks and a few relaxing days of travel for about two dozen airmen.

At least that was the answer for the 603rd Air Control Squadron.

A trainload of equipment and airmen is currently on its way to Poland, taking advantage of Europe&#8217;s railway system. It took two days to load the equipment on the trucks, and another day of loading the trucks on flatbed trailers in the nearby city of Sacile.

In order to take part in the 2003 NATO Air Meet this year, the squadron needs to get its equipment &#8212; and there&#8217;s more than two dozen truckloads worth of it &#8212; across three or four countries. By air, that would require an airlift similar to the one that took the 173rd Airborne Brigade to Iraq &#8212; more than a dozen C-17s. By road, that would require a lot of refueling.

&#8220;It would be a severe logistical undertaking,&#8221; said Tech Sgt. Mark DiNardo, the noncommissioned officer in charge of the operation in Sacile, of a potential convoy to Poland. &#8220;It would take a lot of money and a lot of fuel.&#8221;

So getting the equipment on the train, with the help of the Army&#8217;s 99th Movement Control Team, is the most efficient way to do it. Not that packing and getting the trucks on the trains was loads of fun for the dozens of airmen that were involved. Dolan said it&#8217;s all part of the training.

And the squadron has had some practice with that in recent years.

It&#8217;s the first time the 603rd is heading to Poland. But exercises in Germany and Denmark in recent years have gotten squadron members familiar with train travel.

Because countries in Europe have different requirements, there&#8217;s always the possibility that officials in one country might not accept the way the material is packed on the train cars the military rents from a private company.

Those on board &#8212; traveling in passenger cars attached to the flatbeds carrying the trucks &#8212; might have to do some repacking.

The waits at the border are usually much longer than that, though. Each time the train passes into another country, a new engineer takes over. And inspections are made.

Stops to pick up passengers are not scheduled and airmen are awake around the clock in shifts to make sure no unwelcome visitors get on board. Stevens said there&#8217;s usually time enough to do some sightseeing from the train, though.

With forces spread out all over the globe, large-scale military exercises in Europe are relatively scarce this year. NATO Air Meet 2003, which runs Friday through Sept. 19 in Poland, is an exception.

Forces from 16 members of the alliance will participate in the event, which will feature more than 80 different aircraft. Allied Air Forces North, headquartered at Ramstein Air Base in Germany, will lead the operation involving assets from several U.S. Air Forces in Europe bases and allied countries.

The 603rd Air Control Squadron from Aviano Air Base in Italy and counterparts from Norway and Poland will help direct operations from the ground while the aircraft soar overhead.

Lt. Col. Kristen Dolan, the 603rd commander, said the training part of the exercise has already started for her unit &#8212; which had to ship tons of equipment to Poland to participate.

The American forces participating will do so in an area that&#8217;s been drawing attention of late as a possible future site of U.S. facilities. One of the reasons the exercise is set in Poland is that much of the country&#8217;s airspace will be available to use during the two weeks.

The focus of this year&#8217;s exercise is on the use of composite air operations to suppress enemy air defenses.