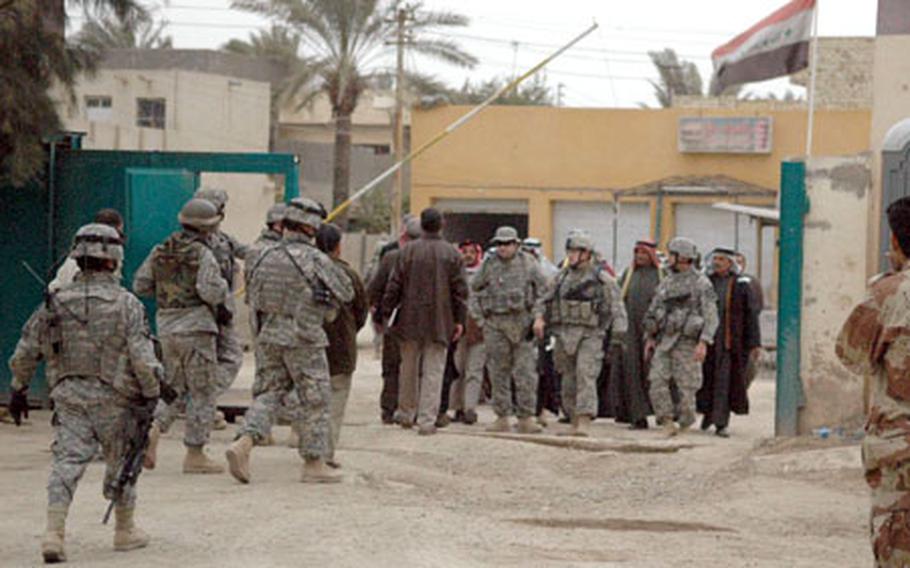 U.S. members of the National Police Training Team for the 2/1 Iraqi National Police and the 2nd Infantry Division’s 3rd Squadron, 61st Regiment, greet a contingent of sheiks and local community leaders on Saturday in Salman Pak during a meeting to discuss the security situation. (Lisa Burgess / S&S)

U.S. members of the National Police Training Team for the 2/1 Iraqi National Police and the 2nd Infantry Division’s 3rd Squadron, 61st Regiment, greet a contingent of sheiks and local community leaders on Saturday in Salman Pak during a meeting to discuss the security situation. (Lisa Burgess / S&S) 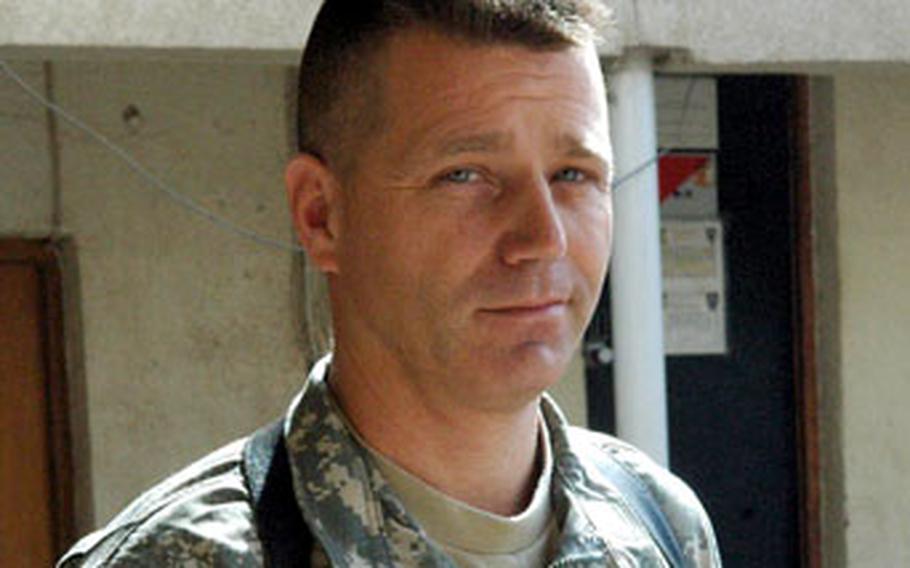 BAGHDAD &#8212; If U.S. troops can travel a key road between Baghdad and the city of Salman Pak unbothered for two full weeks, coalition forces will pull out all the stops to get the region much-needed basic aid.

&#8220;I cannot help fix the water and electricity if my people are getting shot at and killed,&#8221; Phillips told the assembly. &#8220;If we can go for two whole weeks without getting blown up, or any firefights, I will do everything in my power to start flowing aid to this area.&#8221;

Phillips, 42, whose squadron is responsible for the Salman Pak area, made his pitch during a key meeting in the city, about 15 miles south of Baghdad. More than two dozen tribal sheiks and local leaders attended in traditional robes and checkered shumagh headcloths, along with an entourage in more Western garb.

Two days later, as of Monday morning, there had been no attacks against U.S. troops using the Salman Pak road, Phillips said.

&#8220;Unhindered access along Salman Pak Road over the past two days is a positive sign,&#8221; Phillips said.

Salman Pak and the surrounding area used to be a Sunni insurgent stronghold.

But that balance changed in the fall of 2006, when Shiite militias turned their attention to the city, according to the squadron.

By January, the city and the surrounding area had increasingly turned into a no-go zone for everyone: Sunni, Shiite and even, to a certain extent, coalition forces, which were experiencing daily attacks.

The main road to the city from Baghdad is a major artery. But for many locals, the road is under a virtual blockade. Many Sunni Iraqis have gone for months without deliveries of fuel and water.

Others are virtual prisoners in their own homes because, their representatives said Saturday, Shiite militias allegedly operating with the approval of the Iraqi National Police have set up illegal &#8220;checkpoints&#8221; along the road, where residents say they are harassed, robbed and even kidnapped or killed.

Saturday&#8217;s meeting was the first time in almost four months that local leaders met and talked to their government-appointed Shiite mayor, who doesn&#8217;t live in their city, and a representative of the Iraqi security forces, whom they mistrust, Phillips said.

&#8220;The fact that they came to the meeting and sat down with one another, Sunni and Shia, is definitely a sign of progress,&#8221; Phillips said.

But Saturday&#8217;s assembly quickly drifted away from the bigger problems to recitations of individual grievances.

After listening for more than two hours to locals discussing past problems ranging from headdresses being improperly removed by the Iraqi police to a white Cadillac allegedly stolen by the Iraqi police, Phillips tried to focus the group.

He tugged at his blouse.

Americans are in Iraq to help Iraqis, but his first priority, Phillips said, is to make sure that the men and women under his command are not killed or injured.

The Iraqis who attended Saturday&#8217;s meeting probably were not responsible for the attacks against U.S forces, officers later said. But as community leaders, they are likely to know who&#8217;s doing them, and can convey Phillips&#8217; message to the right people, they said.