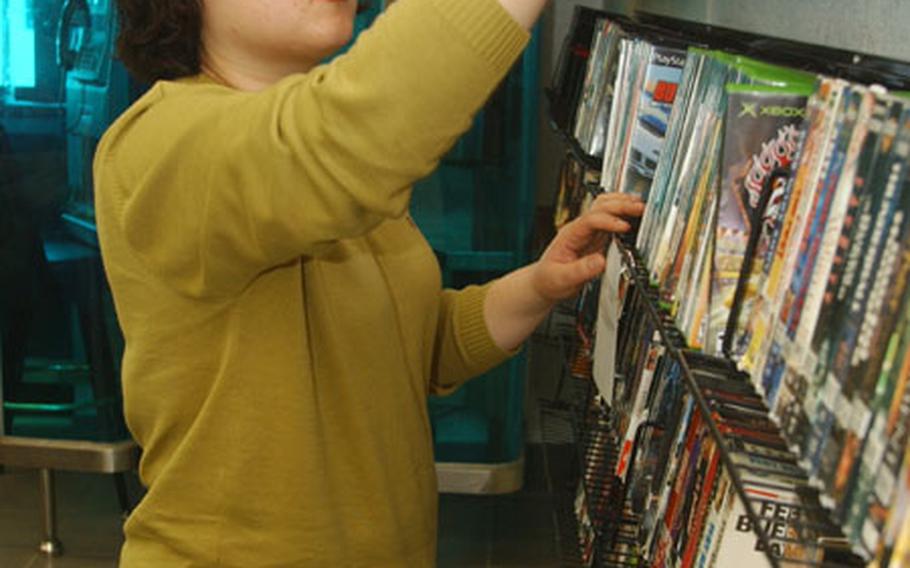 Ko Young-nam, an employee of the 8th Services Squadron at Kunsan Air Base, South Korea, re-shelves recently returned movies and video games at the base&#39;s Falcon community center on March, 29, 2004. The center is just one of numerous morale-related activities operated by the 8th Services Squadron for the base&#39;s 8th Fighter Wing. (Courtesy of USAF)

Ko Young-nam, an employee of the 8th Services Squadron at Kunsan Air Base, South Korea, re-shelves recently returned movies and video games at the base&#39;s Falcon community center on March, 29, 2004. The center is just one of numerous morale-related activities operated by the 8th Services Squadron for the base&#39;s 8th Fighter Wing. (Courtesy of USAF) 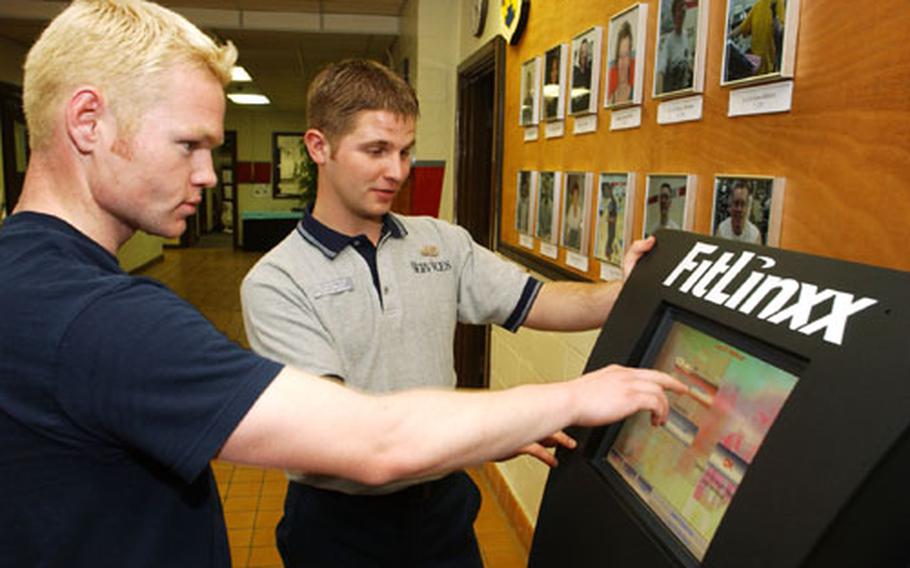 Senior Airman Jason Spencer (left) of the 8th Maintenance Squadron at Kunsan Air Base, South Korea, logs his workout information into Fit Linxx equipment with help from Airman 1st Class Jacob Fergur of the 8th Services Squadron. This and other fitness equipment is part of a broad array of fitness and recreation services provided to the base&#39;s 8th Fighter Wing by the 8th Services Squaderon. (Courtesy of USAF)

OSAN AIR BASE, South Korea &#8212; The unit that provides airmen at Kunsan Air Base a wide array of entertainment, fitness and recreation programs year-round is in the running for a major Air Force award.

The 8th Services Squadron is in contention for the Maj. Gen. Eugene Eubank Award for the best services squadron among bases with populations under 6,000 in 2003. Kunsan has a population just under 3,000.

The squadron already has been up three times for the Air Force award, winning in 1999 and 2001, officials said.

Among achievements that made it the PACAF winner last month were its efforts last year to greatly increase the availability of fitness centers, a push that included increasing by nine hours a week the time the base fitness center is open. The squadron also arranged more than 82 off-base trips last year to ski resorts, shopping venues and amusement parks, and increased by 15 percent over the previous year the number of live concerts, celebrity visits and other entertainment events.

Such recreational and fitness activities are key to airmen at a base like Osan, said Capt. Krista Carlos, public affairs chief for the 8th Fighter Wing, known as the Wolf Pack.

Those services have included a United Services Organization show last July 4 that featured singer Wayne Newton. &#8220;That was huge,&#8221; said Carlos. &#8220;That was probably the biggest USO show I&#8217;ve ever seen. A good portion of the base was out there. It was a good variety show.&#8221;

The Air Force-wide winner should be announced sometime in July and later will receive a trophy at an Air Force services conference usually held in August, Piccolo said.

In her eight months at Kunsan, Senior Airman Vicki Florendo says she has made avid use of the trips and other services the squadron provides the wing.

She went to a South Korean amusement park last Christmas and on a major shopping trip to a market outside Taegu. She signed up for a quilt-making course a few months ago and recently signed up for her second trip to the amusement park, set for April 24.