Chris Brown, 10, crashes down a hill trailed by his brother, Nick, 9, after a spring break snow shower Monday in Baumholder. Communities throughout western Germany woke up to a couple inches of snow. (Ben Bloker / S&S)

Chris Brown, 10, crashes down a hill trailed by his brother, Nick, 9, after a spring break snow shower Monday in Baumholder. Communities throughout western Germany woke up to a couple inches of snow. (Ben Bloker / S&S) Walking paths and forest roads in the Kaiserslautern area were covered in snow after a storm hit communities throughout western Germany with a couple inches of snow. (Ben Bloker / S&S) 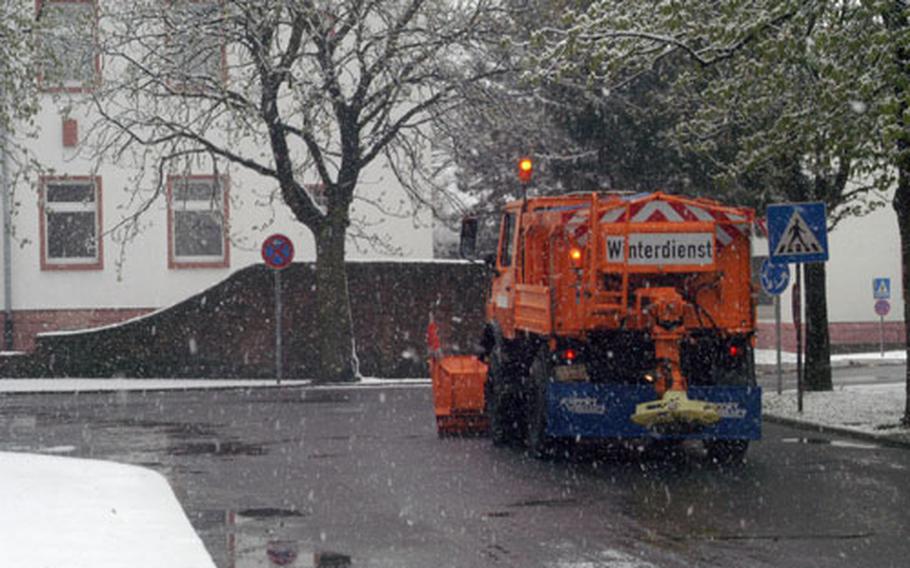 Where the heck did spring go?

Driving snow pounded southern Germany and parts of the United Kingdom on Monday, sending plows and salt trucks to the streets more than two weeks after the official end of winter.

It was the second day of foul weather for southern Germany, which escaped snow and freezing temperatures throughout much of the winter only to be struck by snow two of the last three weekends. Schools were closed &#8212; for spring break.

&#8220;I can&#8217;t believe this weather,&#8221; Sgt. Katherine Storlie said as wet, wind-driven snow flew by outside the Army and Air Force Exchange Service shoppette Monday in Darmstadt. She didn&#8217;t get to enjoy the balmy weather the previous weekend because of work.

&#8220;I was all excited, ready to get out my Capri pants and shorts,&#8221; said Storlie, a desk sergeant at the Darmstadt military police station. Instead, she&#8217;s the one who called for the salt trucks.

Most troops in Europe had the day off as a training holiday, but civilians didn&#8217;t, she said. Some civilians hoped the weather would force officials to bump the road condition status to red, which would send nearly everyone home for the day.

Having lived in Germany for the last decade, Soundita Magriff, a supervisor at the AAFES shoppette in Darmstadt, said the weather wasn&#8217;t surprising.

No heat is predicted for the next five days, according to the forecast from the 21st Operational Weather Squadron at Sembach, Germany. But there&#8217;s no more snow predicted either.

A five-day forecast by the OWS calls for rain Thursday at RAFs Lakenheath and Mildenhall, England, and partly cloudy skies the rest of the week.