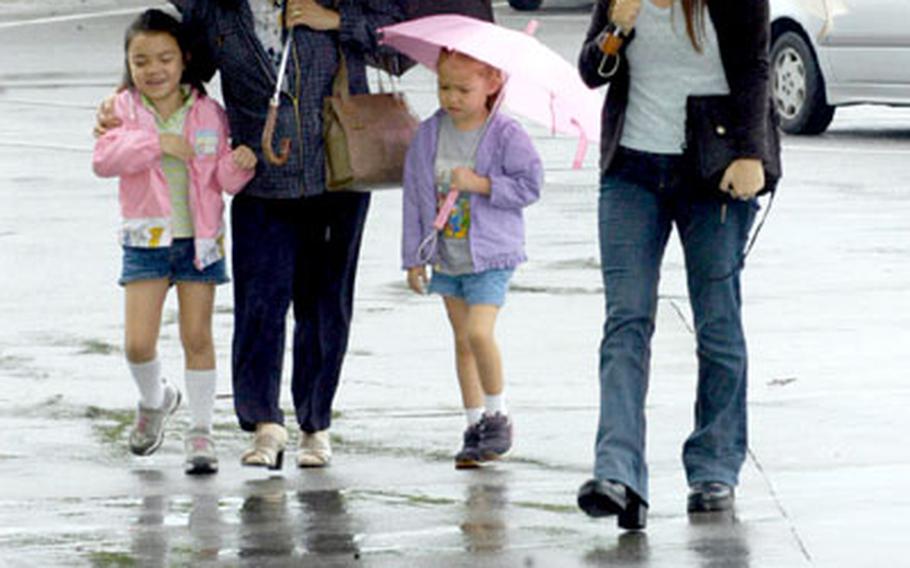 From left, Angel Renfield, 7, her mother, Tina, sister Ana, 4, and grandmother, Fumiko Mueller, brave the rain Tuesday on Camp Foster, Okinawa. Okinawa officials are hoping to make it through to the island’s rainy season, which starts in early May, without water rationing. (Mark Rankin / S&S)

NAHA, Okinawa &#8212; The Okinawa Drought Countermeasures Council announced Tuesday that recent rains just might save the island from water rationing for the time being.

But the water will flow freely only as long as it keeps coming down during the island&#8217;s rainy season, which begins May 8.

Okinawa had an unusually dry winter this year, with water levels at the nine reservoirs sinking as low as 44.7 percent in late March. Voluntary rationing was initiated on all U.S. military bases in February and remains in effect.

The island&#8217;s water taps were to be turned off for eight hours nightly beginning March 29, but 4.52 inches of rain fell the preceding weekend, and the council canceled rationing. Since then, the panel has monitored the water levels closely.

&#8220;The water situation surrounding us still remains very critical,&#8221; said Hiroaki Hirabayashi, an official with the Okinawa General Bureau, a national government agency that operates six of the reservoirs. He&#8217;s also a member of the drought council.

Almost 4 inches of rain fell on northern Okinawa, where the major reservoirs are located, over the weekend.

But if no rain falls in the next week, he said, the level could soon dip to the critical level again.

No rain is forecast for the coming week, he added. However, the Okinawa Meteorological Observatory predicted average precipitation for May and June.

Water rationing on Okinawa was last imposed in January 1994, when the taps were turned off eight hours a night for 28 days.