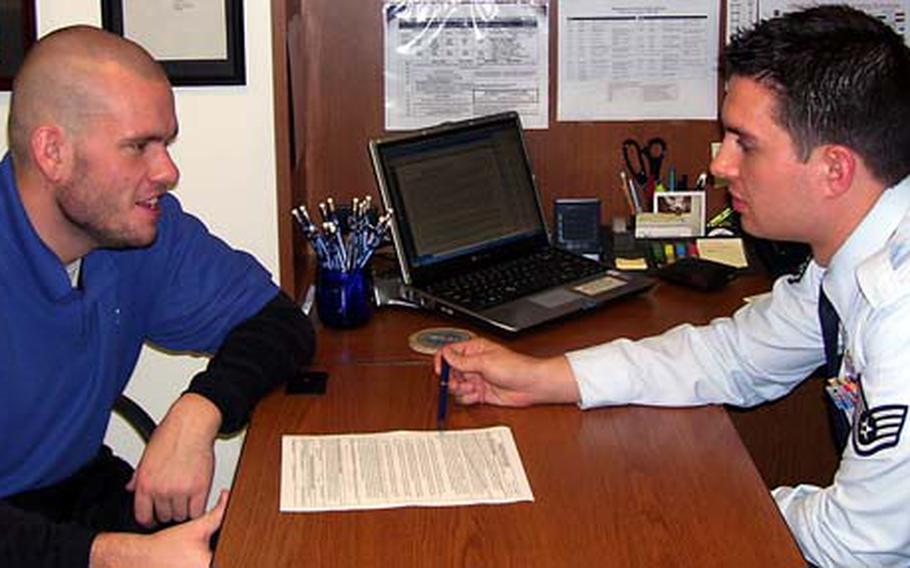 Staff Sgt. Ty Lopez of Rockville, Md., right, talks to a recruit about his enlistment contract. With the aim of boosting its total numbers by 14,000, the Air Force is upping the number of recruiters to pitch the service. (Courtesy of U.S. Air Force)

With the aim of boosting its total numbers by 14,000, the Air Force is upping the number of recruiters.

The Air Force wants to add 200 recruiters after deciding to increase its strength from 316,000 servicemembers to 330,000, according to a service press release.

"I&#8217;m not surprised the Air Force is increasing recruiters. We go through an influx every once in a while," said Master Sgt. Brandy Martinoli, a recruiter at Aviano Air Base in northern Italy. "A couple of years back, we did a plus-up, too. And if we&#8217;re taking in more recruits, we&#8217;ll need more recruiters, more &#8230; military training instructors at basic training and more &#8230; military training leaders at the technical schools."

In June of last year, Defense Secretary Robert Gates announced that he was immediately putting a stop to further reductions of Air Force personnel. The active-duty rolls were projected to decrease to 316,600 by the end of fiscal 2009.

But in announcing that Air Force numbers would increase to 330,000, Gates said that the American public&#8217;s focus on the Iraq and Afghanistan wars is mostly about the Army, but "the reality is that our airmen and women and those in the other services are under strain as well."

The Air Force is looking to fill jobs such as linguists, combat controllers, security forces and pararescue airmen, said Christa D&#8217;Andrea, a spokeswoman with the recruiting command.

As part of that effort, Air Force recruiting officials are looking for roughly 200 active-duty volunteers to serve as recruiters. It hopes to have 95 percent of the new recruiters trained and ready by September, D&#8217;Andrea said.

Airmen typically select the recruiting field for three reasons: autonomy, stability and the chance to work in their hometown, Master Sgt. Craig Ploessl of Air Force Recruiting Service said in Friday&#8217;s press statement. In addition to working independently to find young men and women interested in joining the Air Force, a recruiting assignment allows recruiters do work at or near their hometowns for four years, he stated.

"Recruiting offers a direct opportunity for airmen to step out of their current career fields and provides them the chance to change people&#8217;s lives," Chief Master Sgt. Vance Clark, the recruiting service command chief, said in a statement.

"Men and women who would not have as many opportunities in their home towns are afforded the chance to train, learn, experience and see things and places in the Air Force they never would," he said.

Martinoli has been in the recruiting field for more than eight years and has recruited in California, Boston and now Aviano, where she&#8217;s been stationed for more than a year.

"I love the job," she said. "I love talking about the Air Force and telling everyone about the wonderful benefits &#8230; [such] as quality of life. &#8230; I wanted to spread the Air Force word because the Air Force is not as popular as the Army and Marine Corps."

For January, the most recent figures released by the Defense Department, all active-duty forces, and five of the six reserve component forces met or exceeded their recruiting goals.

Martinoli said she doesn&#8217;t find recruiting overseas more difficult than stateside, though the pool of candidates is different. Aside from recruiting children of military members, she also signs up a number of military spouses.

"Spouses want to join and serve their country like their spouses, and I also have a lot of high-school seniors and juniors, even, who want to follow in their parents&#8217; footsteps."

More information on eligibility is posted on the Web site at: www.rs.af.mil