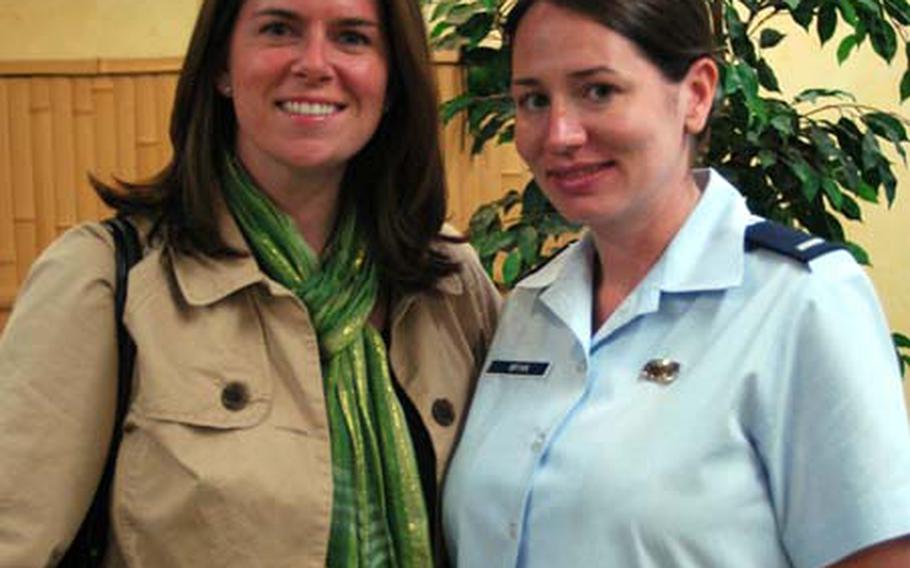 Left: Laura Lange (left) and 1st Lt. Tania Bryan, deputy public affairs officer for the 374th Airlift Wing, pose for a picture. Both of their spouses are members of the 36th Airlift Squadron at Yokota Air Base and are currently deployed to Southwest Asia. (Bryce S. Dubee / S&S)

YOKOTA AIR BASE, Japan &#8212; On a cold morning in February as her husband was preparing to board a C-130 for four months downrange, Laura Lange remarked that the best way for a spouse to survive a deployment is to stay busy.

With her husband, Staff Sgt. Jon Lange, scheduled to come home in the next few weeks along with 15 of his fellow airmen from the 36th Airlift Squadron, Lange said she&#8217;s practiced what she preached, picking up a few hobbies along the way. In addition to two teaching jobs and work with the Enlisted Spouse&#8217;s Club, she&#8217;s taken up hula hooping and taiko drumming.

"I figured I&#8217;d give it a try, and I love it," she said, adding that she has already performed with the team at the Kanto Plain Special Olympics held at Yokota Last month.

Lange picked up hula hooping after seeing a performance at the Enlisted Spouses Club by a member of a Japanese competitive hula hoop team.

It is activities like these, Lange said, that help pass the time while her husband is deployed.

"I stay pretty busy with work," said the first-time mother-to-be, her due date about four weeks away.

"Right now my only real hobby is preparing for the baby."

This is her husband&#8217;s first deployment. And since she&#8217;s deployed before, she said she&#8217;s used her experience to help out her husband, especially when it comes to knowing what to send in care packages.

This is Lange&#8217;s husband&#8217;s 13th deployment in his career, the third during their relationship, she said.

Overall, more than 800 servicemembers have deployed from Yokota in the past 12 months, Bryan said.

To help the spouses of deployed servicemembers during the stressful time, the base offers several different programs and activities including deployed spouse dinners, trips and free child care. However, the "unofficial" support channels &#8212; friends, co-workers and other family members in the units &#8212; are what Bryan said help her most, especially talking to other mothers and mothers-to-be.

"We all talk and share notes," she said. "Someone somewhere always has an answer for everything."

Lange and Bryan both agreed that regardless of what number deployment it is, time spent away from their spouses never gets any easier.

"Remember how you feel now and how people helped you," Bryan said. "And pay it forward to those who deploy in the future."