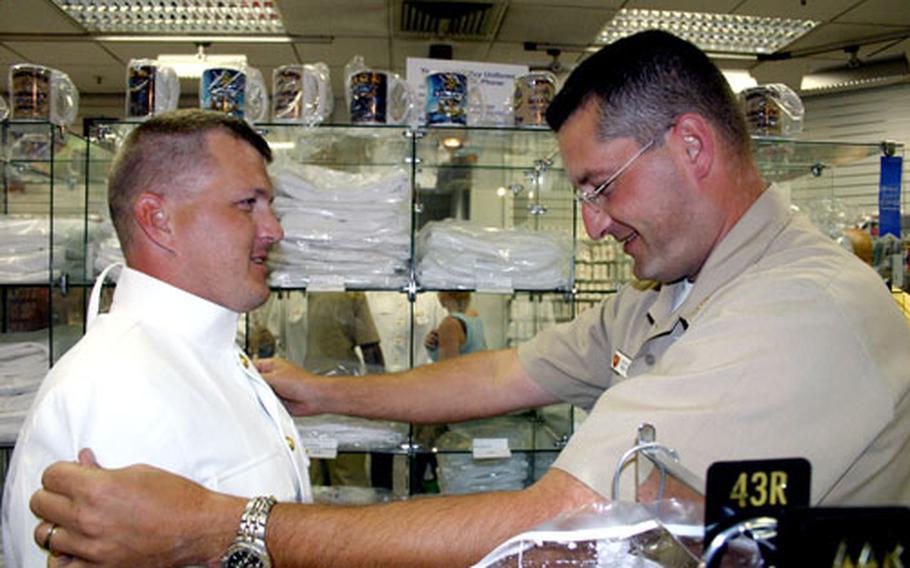 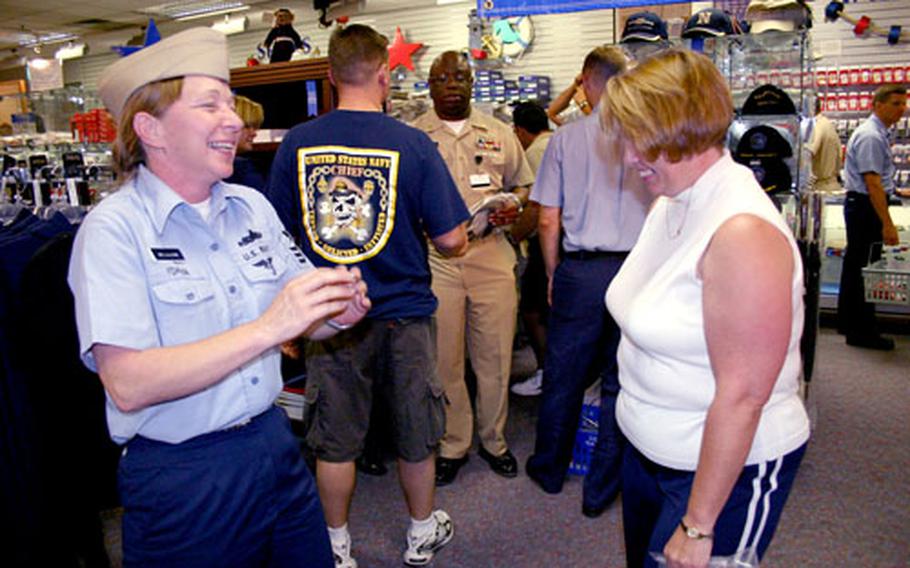 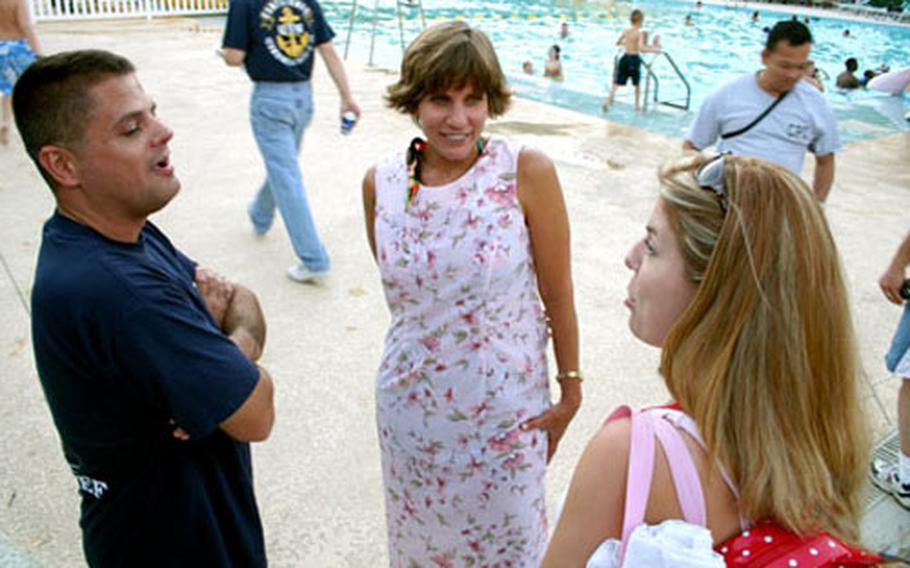 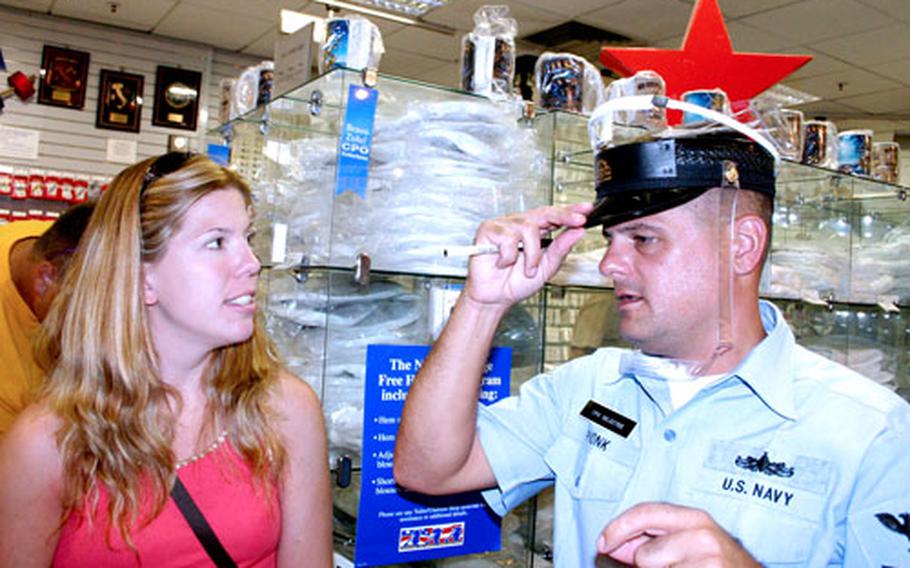 Petty Officer 1st Class Joe Pionk brought his wife, Liz, with him to pick out uniforms and accessories he will need after he is promoted officially to chief petty officer in September. (Sandra Jontz / S&S) 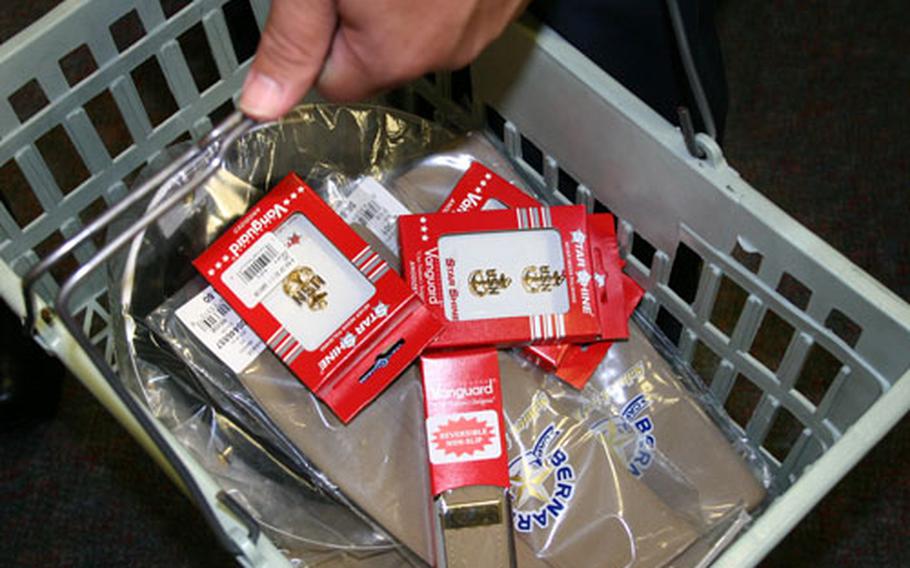 Some of the items that make up a chief petty officer’s uniform, inlcuding anchors, belts and garrison caps. (Sandra Jontz / S&S)

Editor&#8217;s note: Each August, thousands of E-6s in the Navy go through a rigorous indoctrination before becoming senior noncommissioned officers. Stars and Stripes is following 21 sailors from Italy and Turkey who are going through the six-week program in Naples, Italy. This is the second of a three-part series; Part I appeared on August 14.

NAPLES, Italy &#8212; As Renee Nile pulled on her socks one July morning, she said she got a message from God: She needed to sock shop for her husband.

Petty Officer 1st Class Chris Nile was going to need new ones to match the new uniforms he&#8217;d soon be donning. Several hours later, Chris Nile called with the news she said she already knew: &#8220;How are you doing, Mrs. Chief Petty Officer?&#8221; he had asked over the telephone.

The news of her husband&#8217;s much-sought-after promotion from E-6 to E-7 began a new, more arduous chapter in Renee Nile&#8217;s role as a Navy spouse, she said. One, which in recent years, Navy leadership has made easier to embrace.

This year, 5,282 petty officers first class out of an eligible pool of 19,646 worldwide learned July 29 that they had made the cut for promotion from E-6 to E-7. From that day, they embarked on a six-week transition process to becoming senior enlisted leaders in the Navy.

When Master Chief Mary Kleitz traded her dungarees for khakis in 1995, there were no spousal sponsors, no ice-breaker socials, nor any formal plans on the Navy&#8217;s behalf to involve spouses in the transition or in the sailors&#8217; ensuing careers, Kleitz said.

Surely there were no 59-page guideline booklets, as there are now, highlighting for spouses the history of the rank, the demands placed on the promoted sailors and how spouses might mitigate problems.

&#8220;Life as a Navy spouse is often challenging. You will certainly experience loneliness and sometimes even fear and heartache,&#8221; reads a portion of the &#8220;Guidelines for the Spouses of Chief Petty Officers&#8221; handbook, compiled by the Naval Services FamilyLine, based in Washington, D.C. &#8220;However, there will also be many times that are exciting, happy and rewarding. Our lifestyle as military spouses is unique and unmatched by any other.&#8221;

Liz Pionk, 29, said she appreciates the Navy&#8217;s efforts to include the family in her husband&#8217;s transition. If her husband is going to be gone 15 hours a day, often expected of CPOs, she said, it helps to understand why.

&#8220;This really helps, so you&#8217;re not clueless,&#8221; Pionk said of events such as the recent family picnic at Carney Park near Naples, Italy. Pionk has immersed herself in her husband&#8217;s transition whenever possible, from attending the milestone moment the chief petty officer selectees bought new uniforms, to doing physical training with her husband and the 21 selectees from Italy and Turkey who are training at Naval Support Activity Naples.

&#8220;The philosophy is that we bring sailors into the Navy. We recruit sailors. But more often than not, we retain a family,&#8221; said Master Chief Anthony Evangelista, fleet master chief for U.S. Naval Forces Europe/6th Fleet. &#8220;A decision to stay past the initial obligation traditionally is a family decision. It&#8217;s a family-centric approach.&#8221;

&#8220;Quality of service encompasses two things: quality of life and quality of work,&#8221; Evangelista said. &#8220;We have an obligation to sailors to provide them the best quality of work, in other words, the right tools, a clear vision, consistent communication and an ability to feel like the work that they do matters.

&#8220;At the same time, we owe our families the best quality of life that we can provide.&#8230; It&#8217;s a balance. We understand that for a sailor to reach their maximum potential and be the best value to the organization, we have to balance work time and time at home with their families.&#8221;