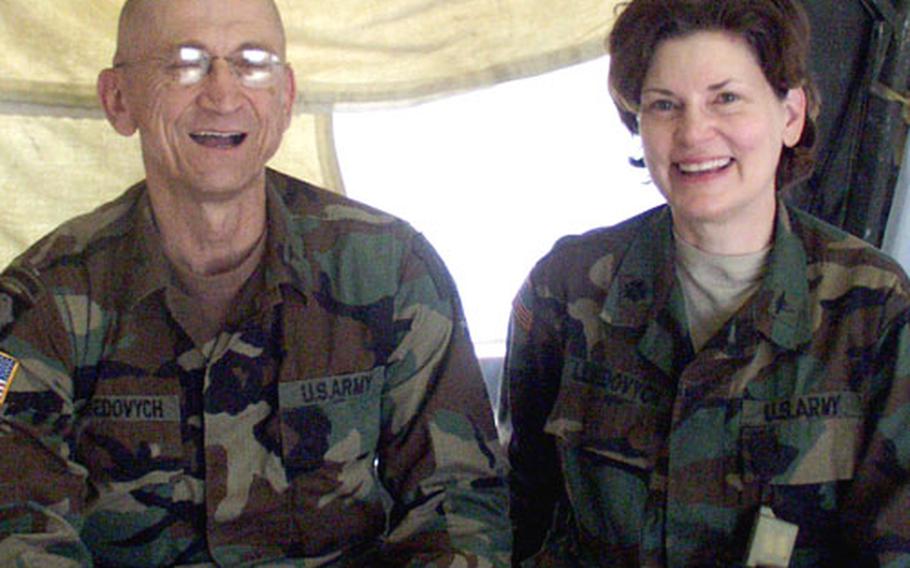 They were married in 1997 in upstate New York, and she returned to active duty and Germany.

Eight years later, Col. Victor Lebedovych, senior surgeon with the 212th Mobile Army Surgical Hospital, and Lt. Col. Linda Lebedovych, a nurse-anesthetist with the unit &#8212; the only married couple in the MASH &#8212; are sitting on boxes in the Pakistan sun discussing the merits and deficiencies of various MREs. &#8220;The beans are terrible,&#8221; Linda says. &#8220;But they have lots of fiber.&#8221;

Now deployed to Muzaffarabad to provide humanitarian aid to earthquake victims, the couple, who combine warmth, wit and more than 50 years of medical and military experience &#8212; &#8220;Fifty years alone for him,&#8221; Linda adds &#8212; also spent September together in Angola. Before that, they enjoyed a deployment of several months in Kosovo.

During those times, they often eat together and usually sleep in the same tent &#8212; along with about 10 other people. Victor, says Linda, is her battle buddy. And they frequently work together in the operating room.

The two, who were each married once before then spent many years as single people before they became attached, clearly enjoy each other&#8217;s company. &#8220;When we were in Angola, I was very impressed how they communicated back and forth as husband and wife,&#8221; said Col. Ken Meade, a MASH obstetrician. &#8220;It&#8217;s a pleasure to be with them.&#8221;

Just about everyone agrees it&#8217;s fun to be around them.

&#8220;They banter back and forth and they tease each other, and it&#8217;s fun to listen to,&#8221; said Maj. Robin Blixt, a nurse attached to the MASH from the 67th Combat Support Hospital, who met them on the current deployment.

Victor, 62, says one important aspect to deploying together is its beneficial affect on the marriage. Since the Army&#8217;s Iraq and Afghanistan deployments began, divorce rates in the military, which usually are significantly lower rates than the U.S. population, shot up, especially among officers. Part of the reason why, experts say, is the distance that can grow between separated spouses and the difficulties adjusting to new roles each has taken on by the time the deployment ends. But also, people get lonely on long, stressful deployments, despite their best intentions and military rules. When he was deployed to Kosovo for some six months, Victor said, pairing up, even among some of the most straight and narrow people, was not uncommon.

The couple will neither confirm nor deny if they&#8217;ve ever paired up together while deployed, which Victor says he believes, theoretically, would not be a violation of General Order # 1 since they&#8217;re married.

On this deployment, the commander expressly forbade even married couples from sleeping together, Linda says. And the Pakistanis requested that men and women sleep in sex-segregated tents. So the Lebedovyches sleep apart.

He also admits that he can&#8217;t rid himself of a fondness for the term &#8220;Nursey-poo,&#8221; even though being married to a nurse has given him a better appreciation for the work nurses do, he says.

Both say they like the emotional respite while on humanitarian deployment abroad from caring for wounded young Americans.