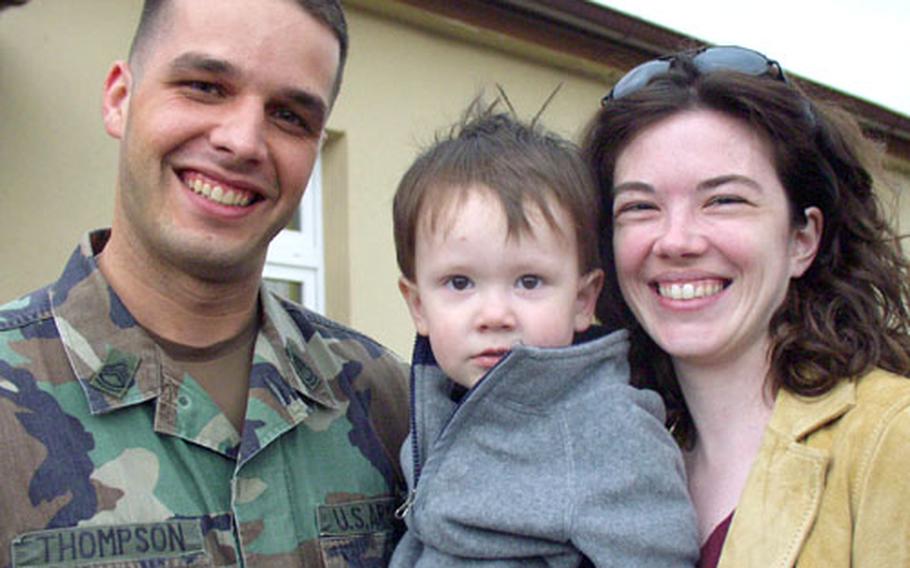 Sgt. 1st Class Mark Thompson traveled to San Diego this week with his wife, Beth, and son, Kyle, for the national convention of the American Diabetes Association. Thompson, a 1st Infantry Division career counselor, was invited to speak at the convention after the group’s CEO read a Stars and Stripes feature on Thompson’s successful effort to stay in the Army after being diagnosed with Type 1 diabetes. (Steve Liewer / S&S)

Sgt. 1st Class Mark Thompson traveled to San Diego this week with his wife, Beth, and son, Kyle, for the national convention of the American Diabetes Association. Thompson, a 1st Infantry Division career counselor, was invited to speak at the convention after the group’s CEO read a Stars and Stripes feature on Thompson’s successful effort to stay in the Army after being diagnosed with Type 1 diabetes. (Steve Liewer / S&S) 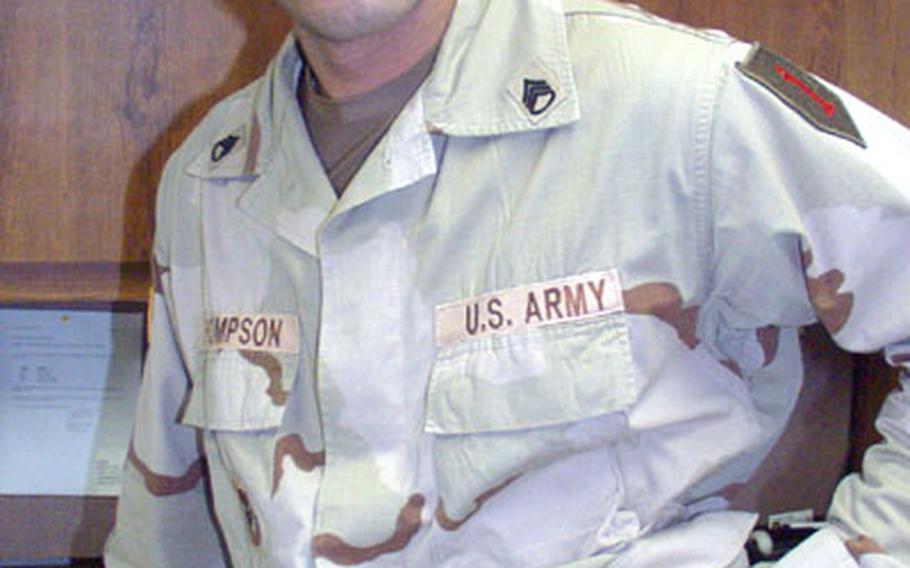 An insulin pump on his belt helps Sgt. 1st Class Mark Thompson control his diabetes. Every nine minutes, the pump shoots a jolt of insulin into his body through a small tube in his stomach. (Steve Liewer / S&S)

W&#252;RZBURG, Germany &#8212; Sgt. 1st Class Mark Thompson will stride up to a convention stage wearing his Army dress uniform Friday and step into the spotlight.

It will describe how he fought to stay in the Army, then convinced his superiors that he was well enough to deploy with his unit to Iraq last year. Now he&#8217;ll become a role model for diabetic children and adults on top of his full-time job as a soldier.

Last year Thompson, 28, was sweating in the heat, traveling around the 1st ID&#8217;s dangerous sector of Iraq to re-enlist soldiers. Although he never hid his insulin pump or needles, few people aside from family, friends and doctors knew about his diabetes.

Then in October 2004, Stars and Stripes told Thompson&#8217;s story in its weekly &#8220;Stripes Spotlight.&#8221; The article said he had grown up in Iowa, joined the Army at 19, and married. Stationed in Germany in November 2000, he collapsed while running one morning following weeks of unexplained weight loss, exhaustion and thirst.

After some tests, a doctor broke the news: His body had stopped making insulin because of a defect in his immune system. He would need to constantly monitor his blood sugar and give himself frequent injections.

Otherwise, he could suffer heart disease, kidney disease, nerve damage or blindness, risks common to all the nation&#8217;s 19 million diabetics.

Already tabbed to pin on his E-6 stripes, Thompson didn&#8217;t want to scrap his Army career. He gathered information from the ADA Web site (www.diabetes.org) to help him manage the disease.

He used his new knowledge to persuade an Army medical board to let him stay in. In 2004, he deployed to Iraq.

After the article ran, soldiers walked up to tell him about their own family members with diabetes. He got e-mails from other diabetics serving in the military, some of them keeping their disease a secret.

The most surprising, though, came from Lynn Nicholas, the ADA&#8217;s chief executive officer. She asked if he would speak at the group&#8217;s 2005 convention. The world&#8217;s largest conference on diabetes, it is attended by 11,000 people annually. Nicholas said the association would fly Thompson, his wife, and his son to California for the event.

Nicholas said Col. David Rubenstein, commander of the Germany-based 30th Medical Brigade, sent her the story after they had talked about how the Army handles soldiers with diabetes.

Thompson said he felt odd about getting attention because his sacrifice seemed no larger than that of other soldiers in Iraq. But he accepted as a way of repaying the association for helping him when he first learned he was diabetic.

Appearing before the ADA is his second milestone this month. On June 1, he made E-7.