Spotlight on USS Enterprise during port call in Croatia 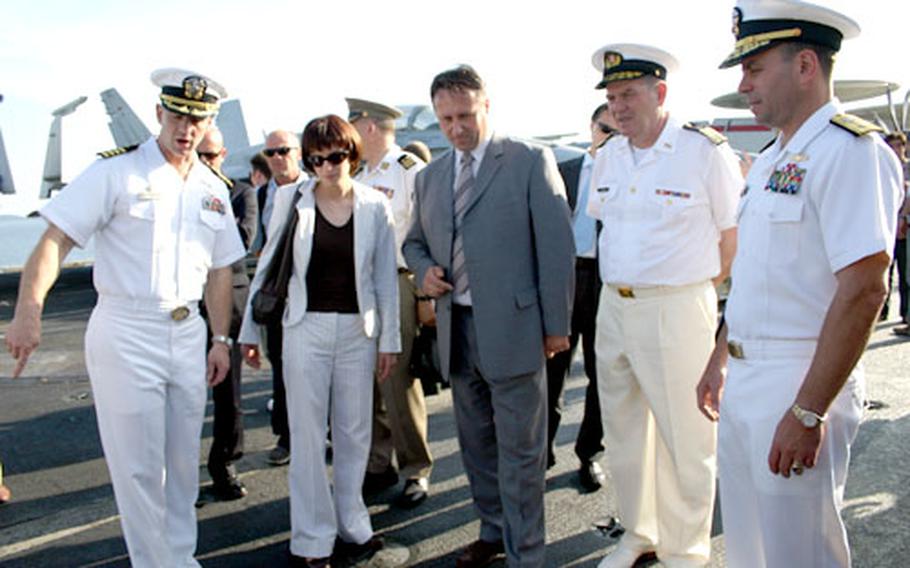 SPLIT, Croatia &#8212; It&#8217;s one heck of a first port call for the sailors and Marines of the USS Enterprise, which is transiting the world&#8217;s oceans, including a combat zone, over the next five months.

Early Wednesday, the mammoth aircraft carrier pulled in to the resort town of Split on the Croatian coast and gave the crew a chance to look around.

&#8220;This is amazing,&#8221; Marine Cpl. Joshua Cline said after returning to the carrier from a tour of the town. Although he was on a liberty patrol, making sure all went well as the sailors and Marines descended on Split, he and others visited various eateries and shopping spots in town.

Commissioned in 1961, the Enterprise is the Navy&#8217;s oldest nuclear-powered carrier. It left its home port of Norfolk, Va., on May 2 on a six-month deployment with nearly 6,000 sailors and Marines and 60 aircraft aboard.

Split is the first of about a dozen planned liberty calls.

On Thursday, the carrier&#8217;s crew hosts a much-anticipated ceremony in which the Navy will present, after 64 years in limbo, the nation&#8217;s highest military decoration, the Medal of Honor, to a distant relative of a World War II sailor who perished during the attack on Pearl Harbor in 1941.

Lt. Col. Srecko Herceg Tonic will accept the decoration on behalf of his relative, Chief Watertender Peter Tomich, who was killed while manning the USS Utah.

During their two-plus days in Split, crewmembers will be doing more than shopping and dining. The carrier and a Croatian ship exchanged 69 of each other&#8217;s sailors for several hours Thursday to learn how the other carries out its respective jobs.

On Friday, sailors and Marines will partake in two community relations projects in which they will refurbish the Jurabonci home for mentally handicapped children and the Marjan city park, said Chief Petty Officer Will Borrall, a ship spokesman.

And the Americans will take on the Croatians in rugby, basketball and soccer matches for which the troops have equal amounts excitement and trepidation, Borrall joked. They know Enterprise players likely won&#8217;t come home victorious, especially in soccer.

The Enterprise&#8217;s arrival made headlines, and while on a boat ferrying sailors and Marines between Split&#8217;s pier and the carrier anchored a few miles off the coastline, Airmen Hillario Arreola and Joshua Dandrea watched Croatian news coverage of their visit.