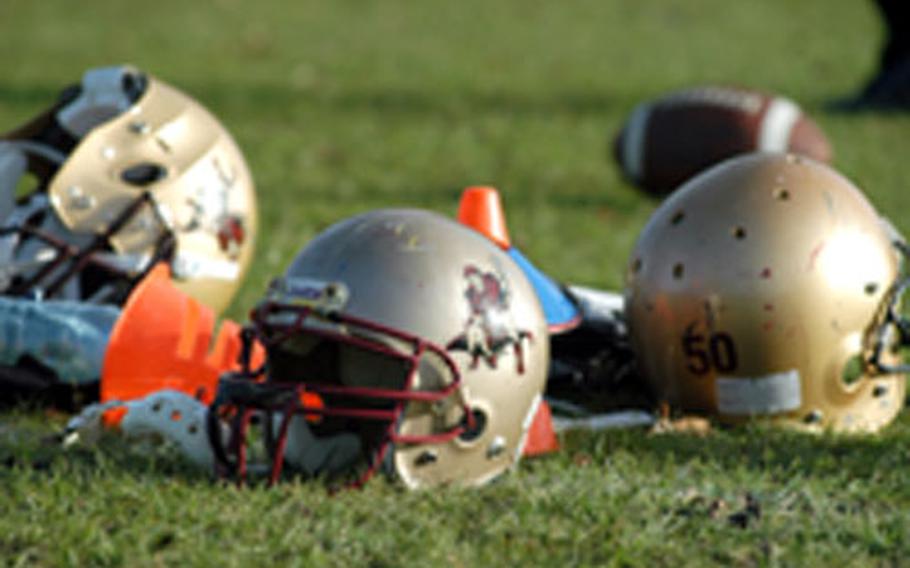 Helmets belonging to players of the Ipswich Cardinals, a semi-pro football team currently looking for more American players and coaches for its 2008 season. (Photos by Sean Kimmons/S&S)

Helmets belonging to players of the Ipswich Cardinals, a semi-pro football team currently looking for more American players and coaches for its 2008 season. (Photos by Sean Kimmons/S&S) 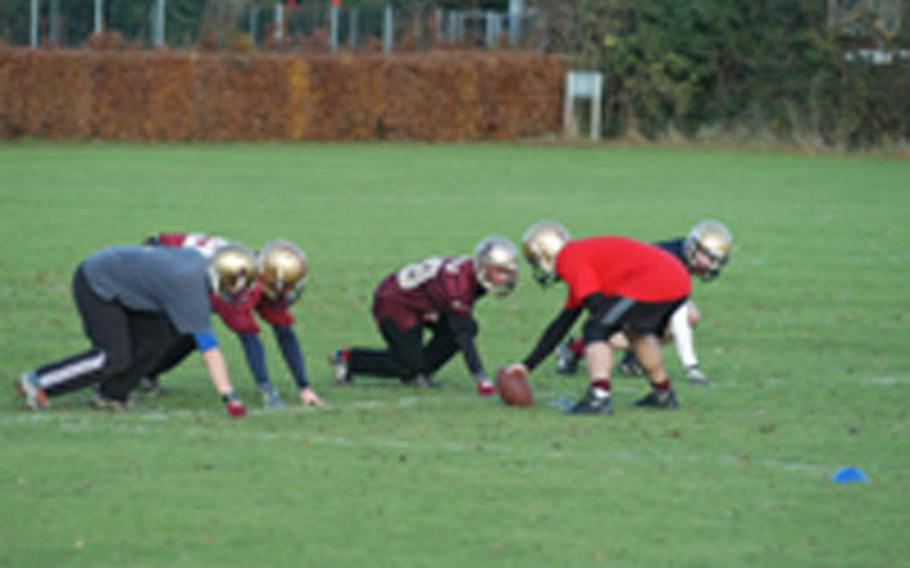 Players on the Ipswich Cardinals team during some recent pre-season training. () 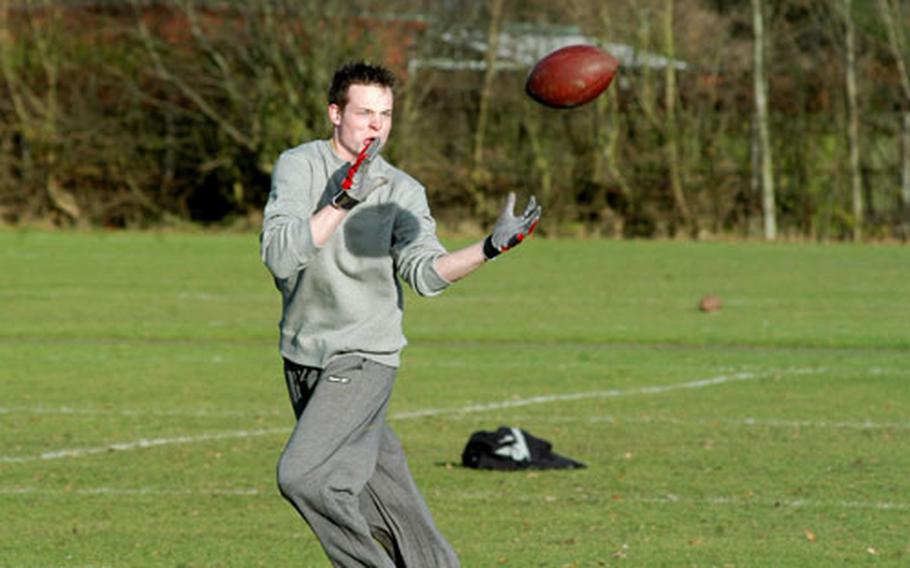 Caine Pamment, a British national, looks to make a catch during pre-season training. () 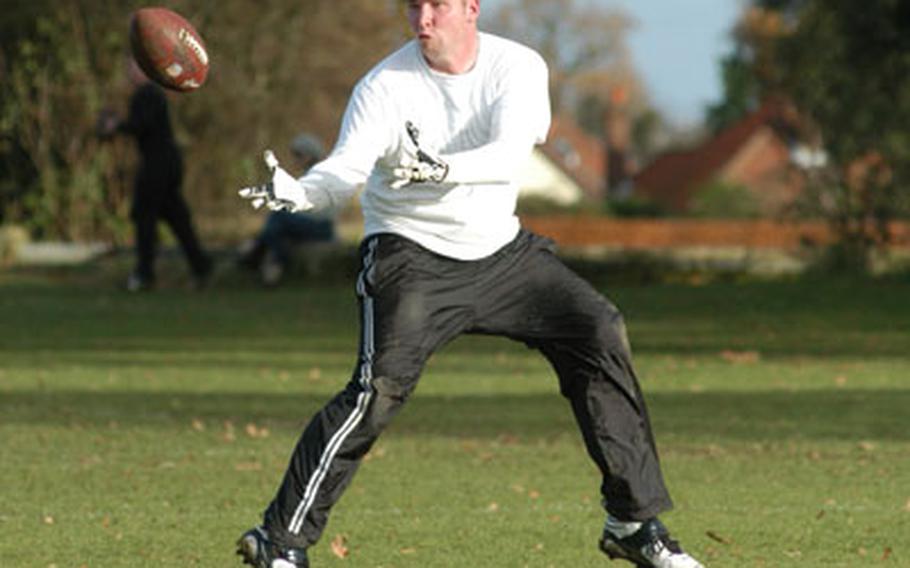 IPSWICH &#8212; It may not have the glory or publicity of the National Football League or even the Canadian Football League. But the British American Football League still gives local athletes the chance to suit up for games on a gridiron with plenty of hard-hitting action to go around.

And for airmen stationed at RAFs Mildenhall and Lakenheath, the opportunity to join the excitement of competitive football is closer than they might think &#8212; about 40 miles to the southeast in the town of Ipswich, to be exact.

The Ipswich Cardinals football team is on the hunt for American players and coaches to share their experience and skills on and off the field in hopes for another successful season.

The semi-pro team, which has American players on its roster each year, finished 8-2 in the regular season and pushed through the playoffs to the Division I championship at Don Valley Stadium in Sheffield.

The championship matchup, in which the Cards lost to the Farnham Knights in September, was televised on Sky Sports, according to head coach Sandy Francis.

To maintain its winning ways in a country where American football is far from a premier sport, the Cards sometimes rely on their counterparts from the States who began to play the sport at a younger age.

&#8220;They know the game more than the average Englishman,&#8221; said Francis of his American players at a recent preseason training session.

Other than knowing the fundamentals, Francis is keen on U.S. airmen because of their strong work ethics and dedication to staying physically fit, he said.

And to prep his team for the upcoming 2008 season, Francis also is welcoming those with football know-how to help share coaching duties.

&#8220;Anything they specialize in. Anything that they feel could help us,&#8221; said Francis as he watched over passing drills.

One of the players participating in the drills was Heath Johnson, a 100th Logistics Readiness Squadron staff sergeant.

Johnson, who played wide receiver and safety last season for the Cards, said he&#8217;s vying for the starting quarterback slot next season.

This will be Johnson&#8217;s third year on the Cards roster and he said he continues to enjoy the experience of playing his beloved sport alongside Brits.

He said that the time shared with his British teammates allows him to dispel any stereotypes Americans might have of the Brits, and gives him a chance to learn more about England. The hard hits that come with the football games are an added bonus, he said.

This is the aircraft mechanic&#8217;s first year playing for the Cards.

So far, the biggest difference between playing football in the States and England has been the British lingo, which isn&#8217;t too hard to decipher, he said.

Ideally, once regular season begins, Francis would like to see his team&#8217;s roster at 70 players, with at least 15 of them being Americans. Now, the team averages about eight American players on the roster. In accordance with league rules, the team can play up to five Americans in a game.

&#8220;In the past, the teams that could afford it imported a lot of American players and won everything,&#8221; Francis said. So the five-American limit was instituted.

More about the leagueThe British American Football League has teams all over the country. For more information on the league, go to www.bafl.org.

To play or coach for the Ipswich Cardinals, one must pay an annual 50-pound (about $100) registration fee to the BAFL. The team supplies uniforms and equipment.

Preseason training is currently under way and team practices officially begin in January at the Northgate International Sports Center in Ipswich. The 2008 season runs from April to August, with the playoffs in September. Those still interested can contact head coach Sandy Francis at 07799 458 357, or check out www.ipswichcardinals.co.uk.