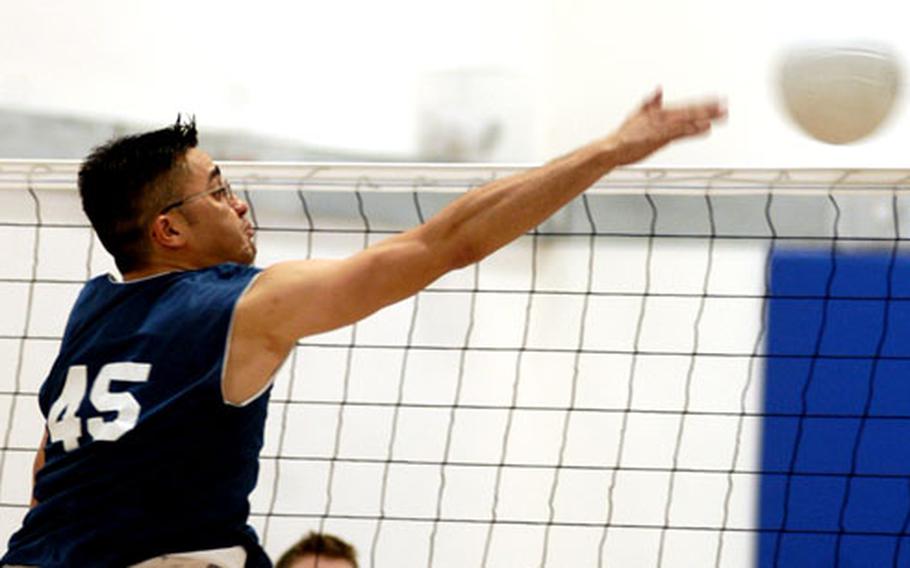 The six-week regular season began last week with 13 teams fighting for the top spot. The battlefield is the fitness center&#8217;s basketball court, where teams from various RAF Lakenheath units face each other in a quest for bragging rights.

&#8220;It&#8217;s the esprit de corps and the spirit of competition that they get out of it more than anything,&#8221; Staff Sgt. Sheldon Briggs, sports director for the fitness center, said of the volleyball players. &#8220;They know they can come out here to have fun and release some stress.&#8221;

Briggs encourages units to attend the volleyball matches and share unit pride with others.

The extra attention on the games could help motivate players to tap into their competitive sides.

A few spectators watched a match-up unfold April 18 between the 48th Civil Engineering Squadron and the 48th Munitions Squadron.

The CES took the first match but fell short in the second. During the third match, both teams kept it close all the way through. For game point, Master Sgt. Joseph Hrezo, a player on the 48th CES team, blocked a spike by Kristopher Hickey to win the series.

Anyone interested in attending future games should contact their respective unit or the fitness center at 226-3607. Games are played Monday through Thursday beginning at 5:30 p.m.