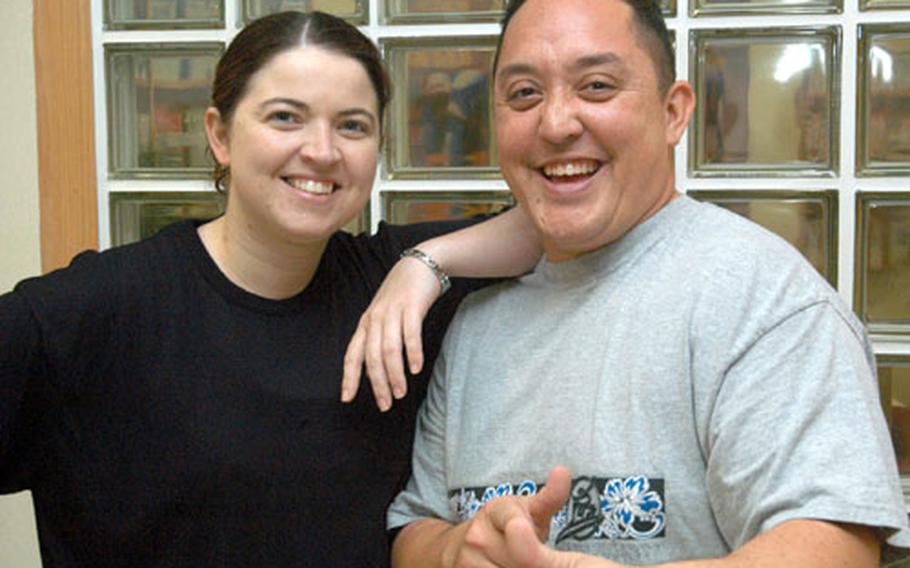 Mildenhall airmen Staff Sgt. Jeffrey Tillman from the 100th Civil Engineer Squadron and his wife, Staff Sgt. Kimberly Tillman from the 352nd Operations Support Squadron, take a breather after attending a fitness class as they work on trying to become the “Largest Loser.” (Ben Murray / S&S)

That&#8217;s the goal for participants in a new health and weight-loss competition called &#8220;The Largest Loser&#8221; that started last week at Lakenheath&#8217;s Health and Wellness Center.

Modeled after an NBC reality show called &#8220;The Biggest Loser,&#8221; which pits two groups of overweight people against each other in a pound-shedding contest, the Lakenheath program is designed to encourage better eating habits by adding a competitive element to slimming down, said coordinator Staff Sgt. Natalie Gatewood.

It struck her that, though there are ample health and fitness programs for active-duty airmen on base, there&#8217;s little that&#8217;s focused on dependents&#8217; needs, she said. It just made sense to tailor a program for family members and encourage participation with the game-show approach.

So far, the tactic appears to be working: By last week, more than 130 people had registered to be part of the competition.

The Largest Loser actually includes two competitions &#8212; one for teens and one for adults. They&#8217;re mostly the same, said Herman Hicks, who is running the teen program, except that young participants will earn points for improving scores in fitness tests, not by dropping weight, which can be unhealthy for young bodies.

To win the three-month competition, participants gain points in two ways: by losing pounds or cutting inches around the waist, and by attending health and nutrition classes being offered over the course of the game.

To keep the competition fair for all body types, Gatewood said, points will be given out for each percentage point of either weight lost or inches shed &#8212; not on a per-pound basis.

Twenty points are awarded for each percentage point earned, and 15 points are given for each class attended, with five more tacked on if a contender attends a follow-up visit after a class.

And it&#8217;s the classes and education that are the real heart of what organizers hope to achieve with the Largest Loser: lasting changes in eating habits.

At the end of January, when the points are tallied, the top losers in each category (boys and girls 13-19, adult men&#8217;s and women&#8217;s and a family/group division) will receive prizes for their achievements. Organizers said the prizes would be &#8220;better than T-shirts and lunch bags.&#8221;

But many participants aren&#8217;t in it to win it, and have joined just to get motivated to eat better and drop the extra pounds.

Husband-and-wife team Jeffrey and Kimberly Tillman, both staff sergeants, said a little bit of competition just makes it easier to stick to their weight-loss goals.