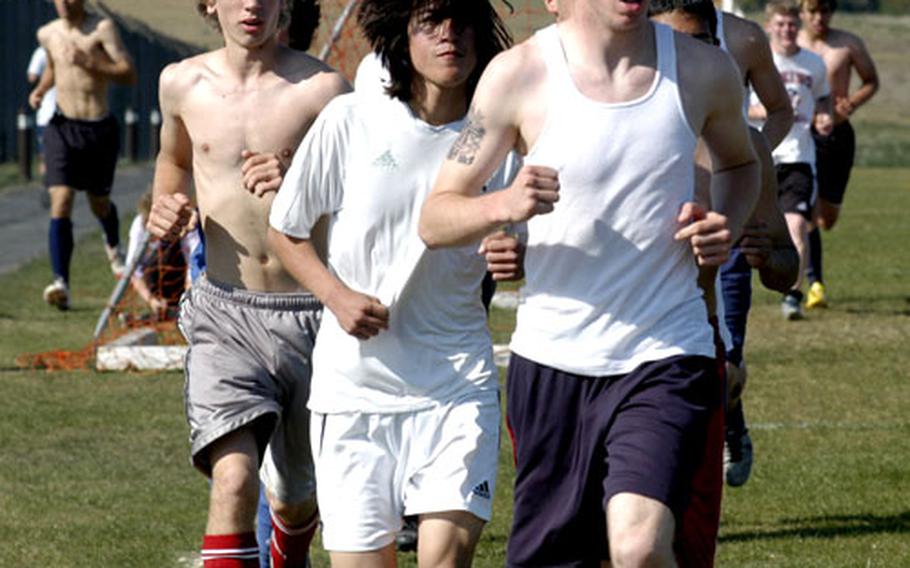 Lakenheath boys soccer players, left to right, Kai Pope, Chris Davis and Ben Green lead the Lancers in a run around the field at a practice before their match against Patch High School Saturday. (Ben Murray / S&S)

Lakenheath boys soccer players, left to right, Kai Pope, Chris Davis and Ben Green lead the Lancers in a run around the field at a practice before their match against Patch High School Saturday. (Ben Murray / S&S) 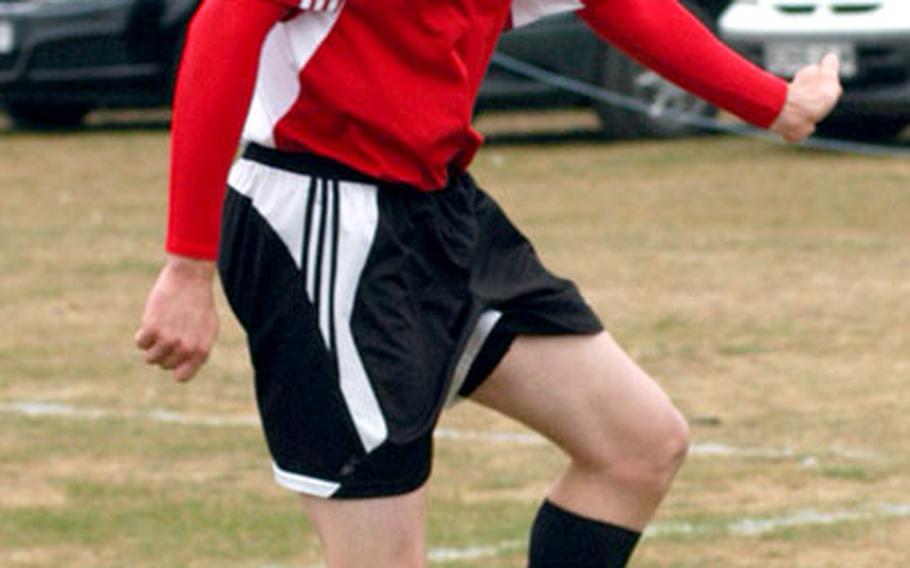 RAF LAKENHEATH &#8212; The Lakenheath High School boys soccer team has had its most successful season in years this spring, with an undefeated record going into the last game of the season and its eyes on the European championship.

But the team lacks one quality, said assistant coach Chris Davis, that some teams might consider important: Talent.

&#8220;We are less talented this year than we have been since I&#8217;ve been here,&#8221; Davis said last week as the team prepared for its final conference game against Patch American High School, which is in Stuttgart, Germany.

It sounds incongruous, but Davis doesn&#8217;t mean it in a bad way &#8212; he tells the boys as much all the time, he said. Rather, he uses the phrase as a way to explain why the team has excelled this season.

Lakenheath&#8217;s key has simply been that it plays well as a cohesive unit, coaches and players said, not as a squad of individually gifted finesse players who fight for the spotlight.

That, and it has one of the best defenses in Division I.

With its 2-0 victory over Patch on Saturday, the team improved to 5-0-1 in Division I, its only blemish a tie against Heidelberg, the juggernaut of D-I soccer in recent years.

Heidelberg, 4-0-1 in Division I, closes out its regular season on Saturday at Wiesbaden.

The win puts the Lancers in the likely position of not facing Heidelberg again until the knockout phase of the D-I European finals in Ramstein May 16-19.

Lakenheath has had some success against the Lions in recent tournament play. In 2005, it beat Heidelberg in the semifinals, only to lose to Ramstein in the finals. Last year, Lakenheath took third as Heidelberg defeated Ramstein for the crown.

As the tournament approaches, players expressed confidence in the team, especially in the defense that has carried it so far.

Lakenheath&#8217;s back row of Derek Dean, Alex Hooper, Eric Hernandez and Ben Green, with keeper Eric Gallegos in the net, have been the backbone of the squad this season, Davis said.

Green was direct with his assessment of the back four.

Players also rated the team as one of the hardest running in the league, with practices heavy on the mileage.

But head coach Garrett Billington added that the biggest key to Lakenheath&#8217;s ability to win is the attitude among the players. A number of players who could be successful up front or play for themselves are willing to sacrifice individual glory for the benefit of the squad, Billington said.

But the team will need goals to win games at the championships, and will look to striker Chris Davis to find the back of the net.

Davis, a soft-spoken junior with some of the quickest feet in the division, echoed other players&#8217; comments on Lakenheath&#8217;s assets this season.