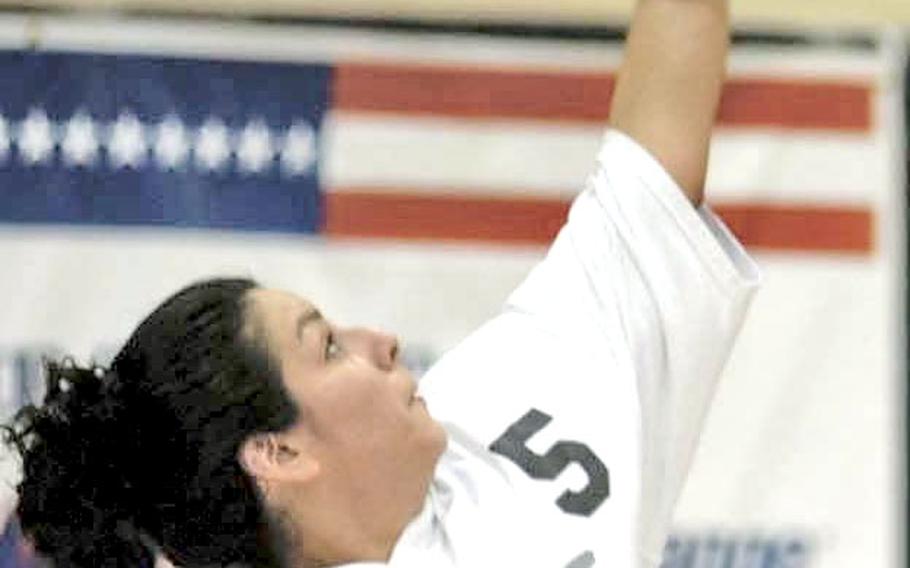 Mildenhall Marauders player Patricia Armstrong launches a serve against the Ramstein Rams on Friday at the Alconbury Fitness Center during the finals of the U.S. Air Forces in Europe volleyball championships. (Ben Murray / S&S)

Mildenhall Marauders player Patricia Armstrong launches a serve against the Ramstein Rams on Friday at the Alconbury Fitness Center during the finals of the U.S. Air Forces in Europe volleyball championships. (Ben Murray / S&S) Lakenheath Eagles volleyball player Ryan Mozingo, foreground, goes airborne for a spike in the men’s finals of the USAFE volleyball championships against the Ramstein Rams on Friday at the Alconbury fitness center. (Ben Murray / S&S)

On Friday at RAF Alconbury, the men clinched their fifth straight U.S. Air Forces in Europe title, while the women brought home their fourth as blue jerseys ruled the gym at the Alconbury fitness center.

But scrappy performances from a pair of underdog England-based teams resulted in two silver-medal finishes, as the RAF Lakenheath men&#8217;s team and the RAF Mildenhall women&#8217;s squad each earned second place in the tournament.

The men faced a particularly difficult challenge to even get to the final round, players said, because only about 50 percent of the team was able to make it to the tournament. Those who did play had never been on the court together as a team before Monday.

That left three players who all traditionally play the role of setter on the court most of the time, plus &#8220;one converted basketball player,&#8221; one team member said.

The men suffered particularly under the serve of Kenneth Schrom, a powerful jump server who decimated Lakenheath in the crucial second game of the best-of-five final.

Schrom was among three Ramstein players named to the men&#8217;s all-tournament team. They were joined by Chris Milby, Kris Hickey and Ryan Mozingo from Lakenheath, Mark Spence from the 501st Combat Support wing from Mildenhall, and one player each from Aviano, Italy, Spangdahlem, Germany, and Incirlik, Turkey.

On the women&#8217;s side, player Tanya Duke said communication was a strong point for the Lady Marauders from Mildenhall, who put up stiff resistance against Ramstein before going down 25-12, 25-17 and 25-18.

Team captain Ghia Simmons was also crucial in keeping the team together during the five days of play, Duke said.

In the end, however, Ramstein&#8217;s consistency on the court wore down the England team.

Two Mildenhall players, Monique Beckman and Tanya Dalrymple, were among the nine women named to the all-tournament team.