Sports: Teams for U.K. bases face off with paint guns during tournament 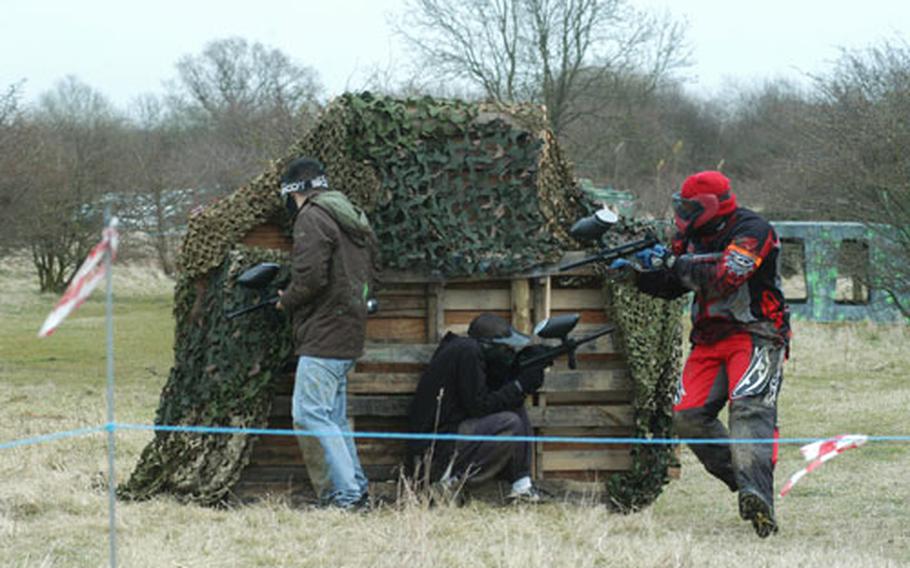 RAF MOLESWORTH &#8212; Tech. Sgt. Myron Grant looked like he knew what he was doing during a paintball tournament here among U.S. troops stationed across the United Kingdom on Saturday.

Not only did the RAF Mildenhall airman have a cool red-and-black patterned jumpsuit to wear, he also had some evasive and attacking methods down.

In a match against a team from RAF Menwith Hill, Grant led his five-man squad to victory by taking out at least three opponents.

First, he ducked behind a low-lying barrier to shield any suppressive fire from his opponents. Then, at the right moment, he got up and outflanked one of those opponents, hiding behind a wooden wall. He then peppered him and another player standing next to him with paintball rounds.

But he wasn&#8217;t finished. There was one more Menwith Hill player alive.

So, with teammates providing cover fire, he crept into a position to the rear of the last opponent and shot him in the back, winning the battle.

After the match, Grant said he showed up to this tourney for the same type of adrenaline rush he just enjoyed.

Besides these two bases, five-man teams from RAFs Alconbury, Croughton, Fairford and Lakenheath also participated in the event. Mildenhall finished in first place with 675 points, while Lakenheath was second with 655 and Fairford was third with 610.

All teams got the chance to face one another in several 10-minute matches. For each, players were let loose with 100 paintball rounds loaded into a Tippmann 98 airgun, capable of expending seven rounds per second.

Two teams battled at a time on one of two separate paintball fields, speckled with barriers and a yellow flag in the middle. Points were awarded to teams who captured the flag, how many opponents they killed and how many teammates survived, said Stuart Perry, one of the tournament coordinators.

With budget cuts looming across the Air Force, Perry said he was uncertain if there&#8217;d be another tourney next year. In 2006, Molesworth hosted a U.S. Air Forces in Europe paintball tourney but this year only U.K. teams made the trip here.